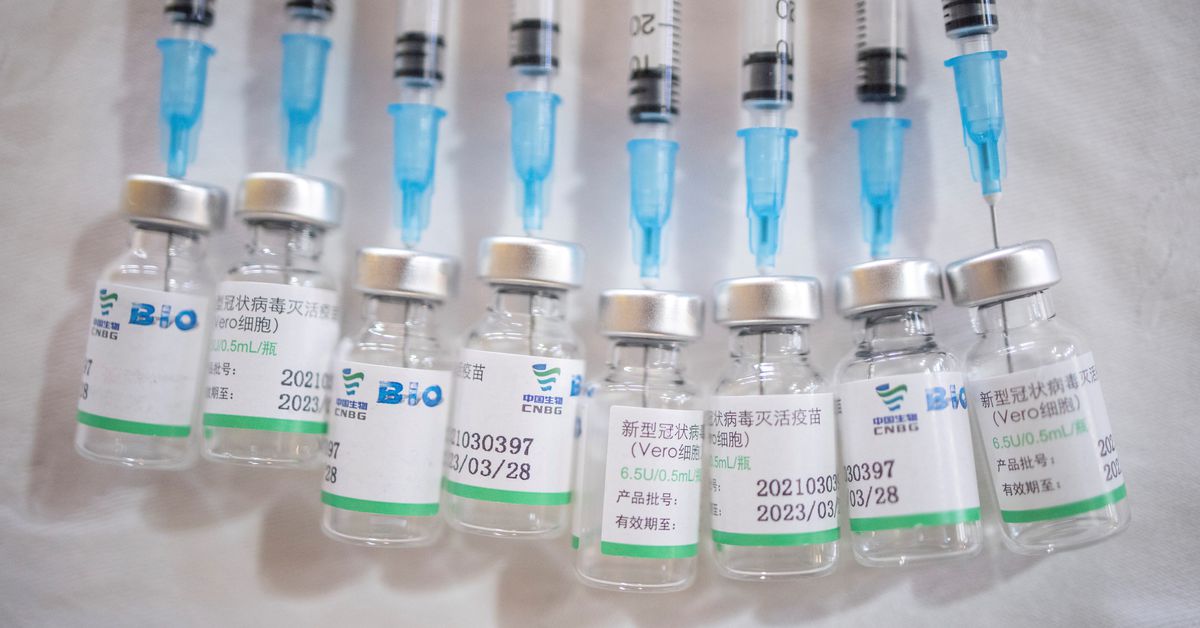 Doses of the Chinese Sinopharm vaccine against the coronavirus disease (COVID-19) are seen at the Biblioteka kod Milutina restaurant in Kragujevac, Serbia, May 4, 2021, in an offer to promote vaccination and contribute to the reopening of cafes, restaurants and bars. REUTERS/Marko Djurica/File Photo

Two COVID-19 vaccines from China’s Sinopharm showed more than 70% efficacy against symptomatic cases, but it remains unclear how much protection they provide against severe or asymptomatic cases, according to the first detailed result of a large late-stage study published to the public.

A vaccine developed by a Wuhan-based subsidiary of Sinopharm was 72.8% effective against symptomatic COVID-19 at least two weeks after second injection, based on interim results, the peer-reviewed study published in the Journal of the American Medical Association showed on Wednesday.

This is slightly better than the 72.5% rate announced in a company statement in February.

Another vaccine developed by a Beijing-based institute linked to Sinopharm, which this month obtained emergency use approval by the World Health Organization (WHO), showed a 78.1% efficacy, the paper said.

The readings were based on calculations over 142 symptomatic cases in a trial involving more than 40,000 participants, with 26 injected with the Wuhan unit’s vaccine and 21 with the Beijing unit’s shot, it said.

“There were only 2 severe cases of COVID-19 among participants, so conclusions about prevention of severe cases cannot be made,” the paper said.

“The study could not address the question of whether the… vaccines prevent against asymptomatic infection, which requires formal study-wide surveillance via virologic and serologic tests,” it said.

The trial, conducted in countries including the United Arab Emirates and Bahrain, did not recruit pregnant women and people under 18, while data was insufficient for the elderly and those with chronic diseases, researchers said.

Data from other trial sties in Egypt and Jordan will be included in the final analysis, researchers said.