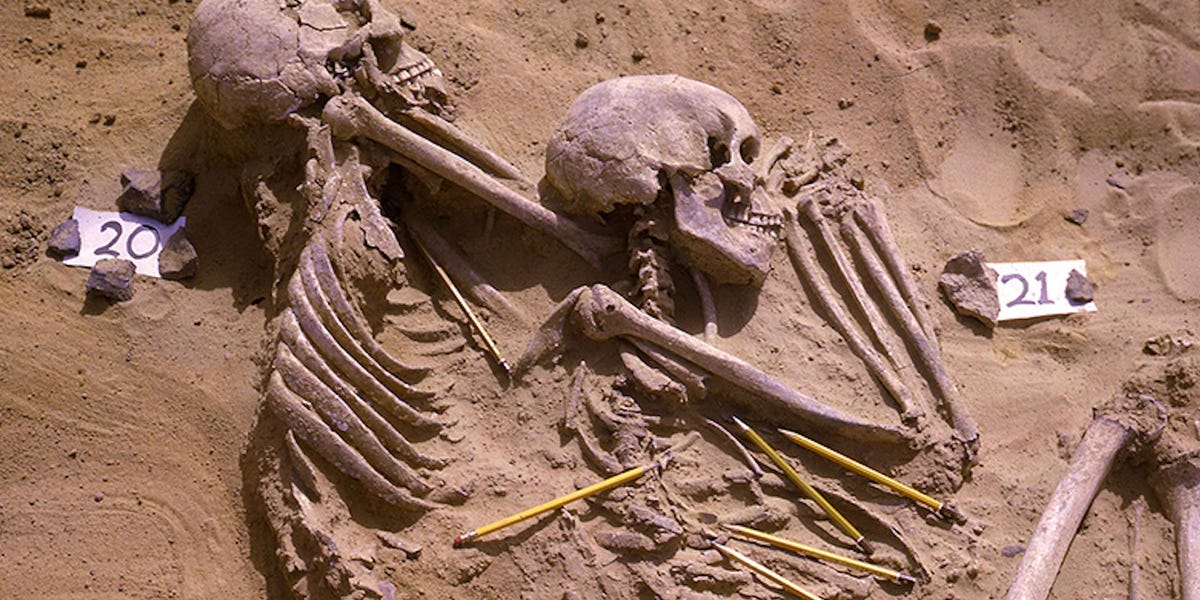 A prehistoric cemetery, one of the earliest known examples of mass conflict among humans, was caused by an unrelenting series of clashes, rather than a single battle, new research found.

Climate change likely drove these events, said Dr. Isabelle Crevecoeur, the lead author of the study and a researcher at the University of Bordeaux.

The findings were published on Thursday in the peer-reviewed journal Scientific Reports.

The Jebel Sahaba site, a cemetery in the Nile Valley discovered in the 1960s, is one of the earliest sites displaying an event of mass violence on humans, New Scientist reported.

The remains, which were dated as more than 13,000 years old, show signs of injuries from weapons such as spears and arrows.

It is often held up as an example of the early emergence of violence and organized warfare triggered by territorial disputes, the scientists said in the study.

New analysis of the remains found more than 100 lesions that had been previously undocumented, some of which showed signs of healing. The remains of 16 people had both healed and unhealed lesions, the scientists found.

This suggests that these deaths came after a series of raids, skirmishes, and ambushes spread months or years apart, rather than after a singular battle.

“That is also a war. It’s just not the concept of war that we have now,” Crevecoeur said.

A war caused by climate change?

One of the most likely hypotheses is that tensions arose as a consequence of extreme weather changes.

The area went from an arid climate to a moist climate between the end of the glacial period, around 20,000 years ago, and the beginning of the African humid period, about 15,000 years ago, Crevecoeur said.

“The transition between both extremes was not gradual. Severe flooding of the Nile is recorded during this period that seems to stabilize only after 11,000 years ago,” she said.

This caused humans to concentrate in what must have been a refuge area at that time, causing competition for resources, a press release accompanying the study said.

Cultural tensions might have also played a part, as previous studies had also shown that humans at that time probably had a sense of group identity, Crevecoeur said.

“If you add cultural identity to climate pressure and maybe stresses to access to basic resources, you really have the roots to generate conflict between the community,” Crevecoeur said.

The scientists also found that male and female remains were evenly affected by the lesions, which Crevecoeur said was a surprise.

“In most ethnoarchaeological examples of similar types of conflict, the number of male individuals exhibiting trauma is always significantly higher than women,” she said.

“This is the kind of injury that you have in close combat, and these differences may reflect instinctive reaction in these situations — when men will maybe be more prone to engage the attacker, when women might try to protect themselves,” Crevecoeur said.