LA CHAPELLE-SUR-ERDRE, France (AFP) — A “known radical” suspected of carrying out a knife attack in France died from injuries sustained in a shootout with police on Friday, hours after he badly wounded a female officer in the latest violence directed at police in recent months.

The man, who was on a terror watch list according to the interior ministry, had been on the run after the attack in La Chapelle-sur-Erdre near the western city of Nantes.

Eighty officers were dispatched to pursue him and two gendarmes were wounded during an exchange of fire that resulted in the arrest of the suspect, authorities said, with one suffering from shock.

No motive for the stabbing has emerged, but the attacker was “a known radical and suffering from a very serious psychiatric illness,” one source involved in the investigation said.

After stabbing the officer at a police station, inflicting life-threatening injuries, the suspect stole her service weapon and fled on foot.

Interior Minister Gerald Darmanin, arriving at the scene in the afternoon, confirmed that the suspect was known to police as a radical. 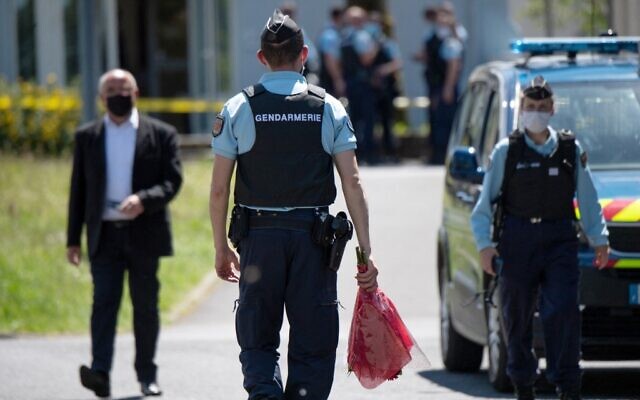 A French gendarme brings flowers to the site where a suspect has been seen after a municipal policewoman was attacked with a knife on May 28, 2021, in La Chapelle-sur-Erdre, near Nantes, western France. (LOIC VENANCE / AFP)

“This French-born French national, around 40 years old and known to police services, was released from prison in 2016 where he was pointed out because of a strict practice of Islam and radicalization,” leading to his inclusion on a watchlist of potential terrorist sympathizers, Darmanin said.

Darmanin said the suspect, who died shortly after the shootout, opened fire on the officers who then responded.

An AFP photo reporter at the scene said he heard around a dozen rounds discharged in two rapid bursts during the standoff in a residential area.

One witness told AFP he saw a civilian on the ground surrounded by police after the shootout. 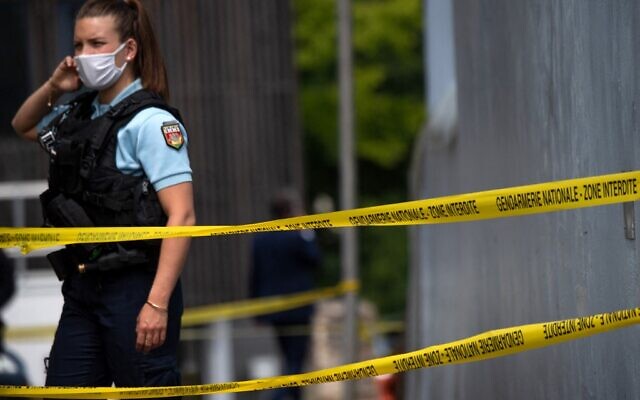 A French gendarme stands guard at the site where a suspect has been seen after a municipal policewoman was attacked with a knife on May 28, 2021, in La Chapelle-sur-Erdre, near Nantes, western France. (LOIC VENANCE / AFP)

“The gendarmes have neutralized the individual suspected of the knife attack against the municipal police officer,” Darmanin tweeted.

Pupils in the area’s primary and middle schools were kept indoors while police tracked the suspect, a city official told AFP.

“We drew the curtains and told the children to lie on the ground. They’ve been there for two hours,” one local teacher told AFP by text message during the manhunt.

La Chapelle-sur-Erdre is a town of 20,000 inhabitants just north of Nantes near the Atlantic coast.

The attack came on the same day that Justice Minister Eric Dupond-Moretti called on French judges to show “firmness” when dealing with people found guilty of attacks on police forces.

French police officers have demanded better protection and harsher punishment for attacks against them after a spate of assaults in the last months which shocked the country.

Earlier this month, officer Eric Masson was shot dead while investigating activity at a known drug-dealing site in the southern city of Avignon.

Masson’s death came after the April 23 killing of Stephanie Monferme, a police employee who was stabbed in the town of Rambouillet outside Paris in the latest jihadist attack in France.

There was no immediate indication that the French authorities intended to open a terror probe into Friday’s attack. 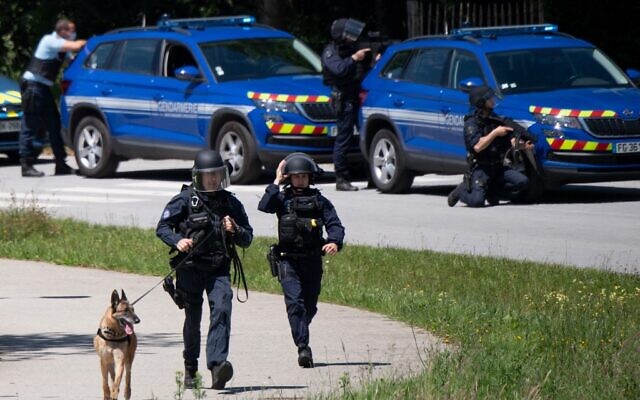 French gendarmes inspect the site where a suspect has been seen after a municipal policewoman was attacked with a knife on May 28, 2021, in La Chapelle-sur-Erdre, near Nantes, western France. (LOIC VENANCE / AFP)

Several attacks over the last year have reignited concerns about the spread of radical Islam inside France and immigration.

In September, a Pakistani man wounded two people with a meat cleaver outside the former offices of satirical magazine Charlie Hebdo which had printed cartoons of the Prophet Mohammed.

On October 16, a young Chechen refugee beheaded teacher Samuel Paty who had shown some of the caricatures to his pupils.

And on October 29, three people were killed when a recently arrived Tunisian went on a stabbing spree in a church in the Mediterranean city of Nice.

In the most severe recent attack against French police, three officers and one police employee were stabbed to death in October 2019 by an IT specialist colleague who was himself then shot dead.

He was later found to have shown an interest in radical Islam.

These attacks came after the massacres carried out by Islamist extremists from 2015 that began with the murder of staff in the offices of Charlie Hebdo in January that year.

In France’s deadliest peacetime atrocity, 130 people were killed and 350 were wounded when Islamist suicide bombers and gunmen attacked the Stade de France stadium, bars and restaurants in central Paris and the Bataclan concert hall in November 2015.