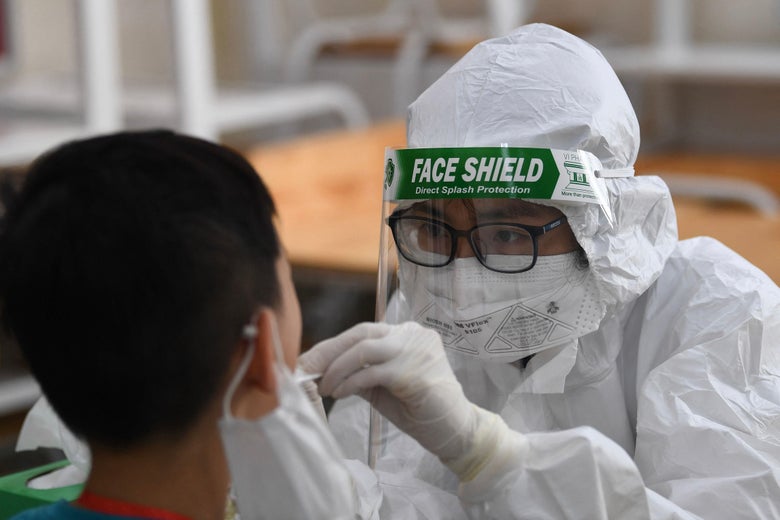 Vietnam says it has discovered a new coronavirus variant that is highly transmissible and could help explain the recent surge in COVID-19 infections across the country. Vietnam’s health authorities carried out genetic sequencing and determined the new variant was a mixture of the COVID-19 strains that were first detected in the United Kingdom and India. “That the new one is an Indian variant with mutations that originally belong to the UK variant is very dangerous,” Health Minister Nguyen Thanh Long said at a government meeting. Long said that lab tests suggest this new variant could spread more easily. “The characteristic of this strain is that it spreads quickly in the air,” he added. “The concentration of virus in the throat fluid increases rapidly and spreads very strongly to the surrounding environment.”

Vietnam had been seen as a success story in keeping COVID-19 under control. At the beginning of the month, the country of some 98 million had recorded only a little more than 3,100 cases and 35 deaths since the start of the pandemic. Now that number has grown to almost 7,000 cases and 47 deaths while only 1 percent of its population has been fully vaccinated. The new variant could be responsible for the quick spread of the virus, Long said.

Experts cautioned it was still too early to tell whether this variant is something to be worried about and it isn’t exactly clear how much is known about it. The public statements make it sound that the determination that the variant is more transmissible was made through lab cultures, which may not be a reflection of how it acts in the real world. “A lot of different mutations happen as the virus is transmitted and most of them are not of clinical significance,” Todd Pollack, a Hanoi-based infectious-disease expert for Harvard Medical School, tells the Washington Post. “Just because they say [the new variant] has features of one and the other … doesn’t mean they got together in one patient and spit out some combined hybrid ‘supervirus’.”

The World Health Organization said it still hasn’t made a determination on the significance of the variant. For now, the WHO has said the four variants of the virus that are of global concern are the ones that were first detected in India, Britain, South Africa, and Brazil.