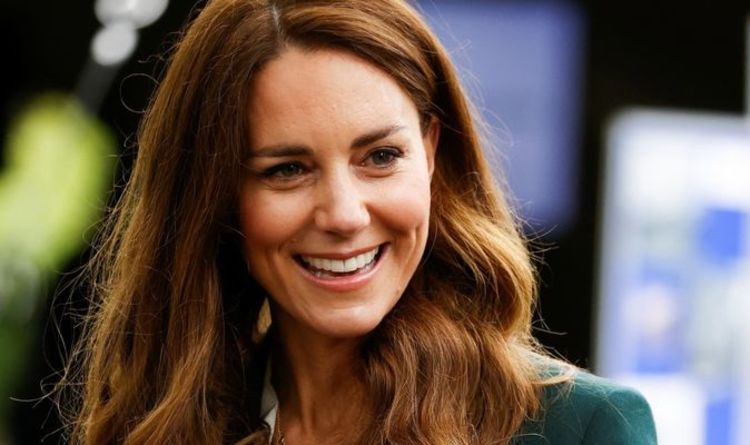 The Duchess of Cambridge was spotted wearing a touching piece of jewellery in tribute to George, seven, Charlotte, six, and three-year-old Prince Louis. Kate donned an Alphabet Necklace by Danielle Draper featuring the first letter of each of her three children’s names.

The Duchess wore the gold necklace during an engagement to Starbank Park with Prince William on Thursday – the last day of the couple’s royal tour north of the border.

Kate and William left their children at home for their visit to Scotland.

But the Duchess kept them close with her necklace.

The Cambridges helped nursery school children scatter plant seeds that will attract butterflies and bees during their visit to the park in Edinburgh.

The children from Edzell Nursery dropped the seeds on a nature trail which has stations teaching them about classic fairy tales including Hans Christian Andersen’s story The Princess And The Pea.

As the youngsters showed William how to plant the seeds, he told them: “You’re very good gardeners.

“We’re going to get a lot of plants. It’s going to be a massive forest.”

Kate and William also met teenagers working towards their Duke of Edinburgh’s bronze award and joined them as they planted sunflowers and an apple tree.

Starbank Park is run by the City of Edinburgh Council and protected by Fields in Trust, which has William as its president – a role previously held by Prince Philip.

During the event William and Kate launched a new initiative, Fields in Trust’s Green Space Index, which is designed to measure access to parks and green spaces for people across Britain.

The Cambridges ended their Scottish tour later on Thursday, with the Duke giving a highly personal farewell speech.

Speaking in Edinburgh at the closing ceremony of the General Assembly of the Church of Scotland, he said: “These people make Scotland the vibrant, friendly, innovative and determined place Catherine and I love, and is so important to us.

“I’m shaped by this place. The abiding affection I feel for it is rooted in my experience of its everyday life in people, relationships, and its ethic of neighbourliness.”

William arrived in Scotland on May 21, later joined by his wife, in his role as Lord High Commissioner to the General Assembly of the Church of Scotland with the aim of listening to people to “learn more about your challenges, but also, to learn of your hopes and aspirations”.