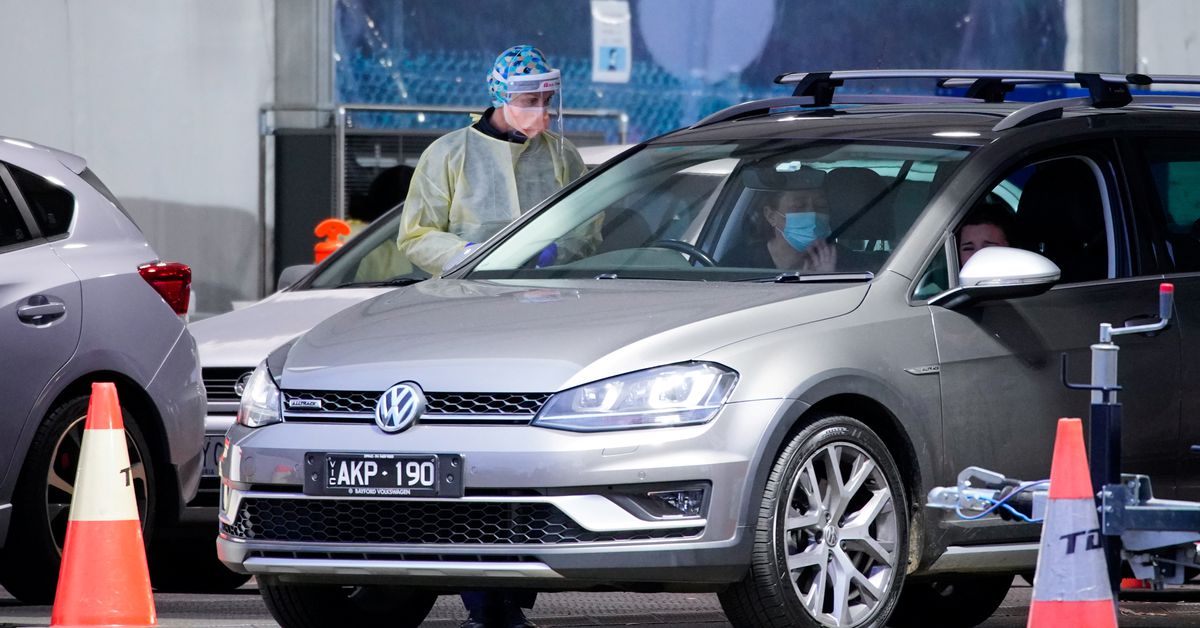 A healthcare worker administers a coronavirus disease (COVID-19) test at a drive-through testing centre on the first day of a seven-day lockdown, as the state of Victoria looks to curb the spread of an outbreak in Melbourne, Australia, May 28, 2021. REUTERS/Sandra Sanders

Australia’s Victoria state authorities said on Tuesday that it was still unclear whether a snap one-week lockdown to contain a fresh COVID-19 outbreak would end as planned on Thursday night, as the state grapples with a growing virus outbreak.

Australia’s second-most populous state was plunged into the lockdown on May 27 after the state reported its first locally transmitted cases in nearly three months early last week, forcing its near seven million residents to remain home except for essential business.

Nine new locally acquired COVID-19 cases were reported on Tuesday taking the total infections in the clusters to 54. Tuesday’s data includes six cases announced on Monday which were recorded after the midnight cut-off deadline.

“I don’t know if there is going to be an extension or not,” Victoria state Health Minister Martin Foley told reporters in Melbourne. He said “significant concerns” remained about community transmission as several venues were added to the hotspot list.

“We are not yet in a position to make that call … and as soon as we are, we will be sharing that with all Victorians,” said Foley.

About 75% of the 4,800 primary contacts traced in the outbreak have now returned a negative test, with results awaited for the rest. Officials said they could trace all three clusters to the overseas traveller who tested positive days after finishing quarantine.

The risk to the community is low but the ship, destined to Malaysia, should leave as soon as possible, Premier Mark McGowan told reporters.

Snap lockdowns, regional border controls and tough restrictions on movement have largely helped Australia escape the higher COVID-19 numbers in many other developed countries. So far the country has reported more than 30,100 cases and 910 deaths.

Data from ANZ bank showed total spending in Victoria slumped 49% in the first three days of lockdown compared with the prior week, as the lockdown shut most of the state’s economy.

The latest outbreak in Victoria has put the federal government under pressure after fresh cases were linked to a care centre for senior citizens in the city amid a sluggish COVID-19 vaccine national rollout.

The Australian government defended the pace of the vaccine rollout in care centres for seniors, though authorities have not yet disclosed how many of their workers and residents have been inoculated.

“We’re comfortable about where we’re at, everybody would have liked to have done it faster, but logistically, we’ve done it as quickly as we possibly could,” Federal Aged Care Minister Richard Colbeck told ABC Radio on Tuesday.

More than 700 deaths were reported from Victoria’s care centres for seniors after a second wave of COVID-19 hit the state last year. The state was only able to suppress the outbreak after a hard lockdown that lasted more than 100 days.