The military said a Palestinian man who entered Israel from the Gaza Strip on Sunday and attacked a security guard was not seen crossing the border due to “human error.”

According to the Israel Defense Forces, the assailant entered Israeli territory through a hole in the security fence that was caused by mortar fire from Gaza during this month’s conflict between Israel and terror groups in the Strip.

He was not spotted by a soldier monitoring one of the many security cameras along the border due to “human error,” preventing troops from being called to the scene to intercept the man before he could reach an Israeli community, the military said.

Inside Israel, the suspect — Imad Sufi, 24, from the city of Rafah in southern Gaza — was approaching the community of Sdeh Avraham when he was spotted by civilian security officer Andrei Dustov. 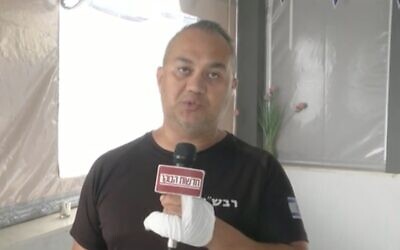 Screen capture from video of community security officer Andrei Dustov describing how he fought hand to hand with a knife-wielding terrorist from the Gaza Strip, May 31, 2021. (Channel 12 News)

Dustov, who was in a car, drove up to the man and called for him to get into the car and identify himself, at which point Sufi took out a knife and attacked Dustov, slashing his hand. A second security officer who arrived at the scene opened fire, shooting Sufi and injuring him.

Sufi was arrested and taken to a nearby hospital for treatment. He has been questioned by the Shin Bet security service.

Though Palestinians regularly attempt to cross into Israel from Gaza, it is highly uncommon for them to make it so far into Israeli territory without being seen and detained by Israeli troops.

According to the Kan broadcaster, the suspect was believed to have entered the area from near the Kerem Shalom Crossing between Israel and Gaza.

The incident came as much of southern Israel remained on edge, less than 10 days after a round of intense fighting between Israel and the Gaza-ruling Hamas terror group drew to a close.

Thirteen people in Israel, all but one of them civilians, were killed, as southern Israel was pummeled by rockets. Over 250 people were reported killed in Gaza by the Hamas-run health ministry during the 11 days of fighting. Israel maintains that most of those killed were terror combatants and that some Palestinians were killed by errant Hamas rockets, not Israeli airstrikes.