Instagram has changed its algorithm amid accusations from employees that it was suppressing Arab, and in particular pro-Palestinian posts, during the recent Israel-Hamas fighting, the company said on Sunday.

In recent weeks employees at the Facebook-owned photo- and video-sharing site complained that posts showing support for Palestinians were not being shared across the platform, while other posts and hashtags were blocked and removed by the moderation system after being incorrectly flagged as associated with “violence or dangerous organizations,” Buzzfeed reported earlier in the month.

The largest instance was for posts with hashtags about the Al-Aqsa Mosque in the Old City of Jerusalem, which was the scene of violent clashes between worshipers and Israeli forces during the last days of the Muslim holy month of Ramadan.

The mosque, the third-holiest site in Islam, sits on the Temple Mount, site of the biblical Temples and the holiest place in Judaism. It has been a frequent flashpoint for violence. 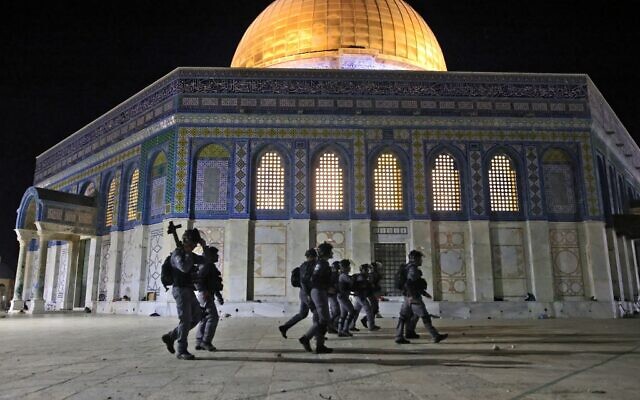 Israeli security forces deploy next to the Dome of the Rock mosque amid clashes with Palestinian protesters at the Temple Mount compound in Jerusalem, on May 7, 2021. (Ahmad GHARABLI / AFP)

Instagram was also criticized for removing posts and deleting accounts by users who were posting about protests against efforts to evict Palestinians from their homes in East Jerusalem’s Sheikh Jarrah neighborhood. It prompted an open letter signed by 30 organizations demanding to know why the posts had been removed.

While posts about Al Aqsa and Sheikh Jerrah were restored following complaints, other posts showing support for the Palestinians continued to be suppressed.

Instagram acknowledged the problem but said it had to do with how the site prioritized posts in general and was not specifically directed at anti-Israel content.

A Facebook spokesperson told the Verge on Sunday that it was caused by the algorithm prioritizing original posts over shared content, giving the impression that it was suppressing certain views or topics.

“We want to be really clear — this isn’t the case,” the spokesperson said. “This applied to any post that’s re-shared in stories, no matter what it’s about.”

The company said that in the past people had clearly preferred to see original content, but that has changed, especially during times of conflict.

“There’s been an increase— not just now but in the past as well — in how many people are resharing posts, and we’ve seen a bigger impact than expected on the reach of these posts,” the spokesperson said. “Stories that reshare feed posts aren’t getting the reach people expect them to, and that’s not a good experience.”

Social media sites have faced numerous problems trying to weed out hate speech and misinformation on their sites, and to ensure they are not used to support terrorism.

Earlier this month, another Facebook-owned application, the messaging platform WhatsApp, blocked 17 Palestinian journalists, apparently after joining a WhatsApp group that disseminates information related to Hamas operations. Hamas, which rules the Gaza Strip, is viewed as a terrorist organization by Israel and the United States, where Facebook is headquartered. 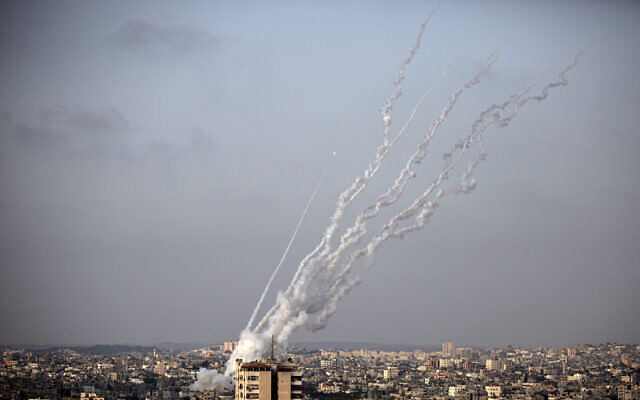 In this May 10, 2021 photo, rockets are launched from the Gaza Strip towards Israel. (AP Photo/Khalil Hamra)

That came after an 11-day war that caused widespread destruction across Gaza with 253 Palestinians, including 66 minors killed in the fighting, according to the Hamas-run Health Ministry, which did not differentiate between terror group members and civilians. The Israeli army said some of the Gaza casualties were caused by the terror groups’ rockets falling short and landing inside Gaza.

One soldier and 12 civilians in Israel, including a 5-year-old boy and a 16-year-old girl, were killed in the terror groups’ rocket fire, and hundreds were injured.

WhatsApp also blocked the accounts of over a dozen Israeli far-right activists associated with the Otzma Yehudit party, among them the account of the wife of its leader MK Itamar Ben Gvir and that of Bentzi Gopstein, who heads the extremist Lehava group.