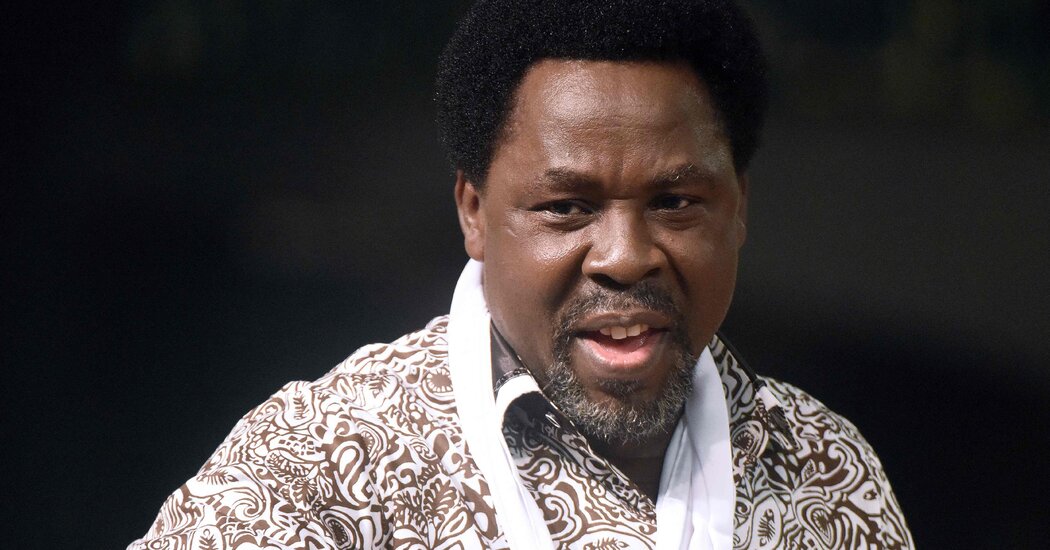 DAKAR, Senegal — One of the most popular and controversial evangelical pastors in Africa has died at 57 of unknown causes.

Temitope Balogun Joshua, known as T.B., founded the Synagogue Church of All Nations in Nigeria. He died on Saturday after speaking in a meeting on his television channel, Emmanuel TV.

His death was announced on his official Facebook page, which said his last words were “Watch and pray.”

Mr. Joshua was one of Nigeria’s millionaire class of Pentecostal pastors, many of whom preach a prosperity gospel that some say was imported from the United States, telling their adherents that faith will bring them wealth and success. He also claimed that thousands of people with health problems had been healed at his church.

Last August, he claimed to have healed people stricken with Covid-19 through a virtual prayer session.

He offered what he said were anointing stickers and anointing water. When the Ebola virus broke out in West Africa eight years ago, he sent 4,000 bottles of holy water to Sierra Leone.

In 2013, four people died at a branch of his church in Ghana and 30 were injured in a stampede after his television channel announced that his anointing water would be given out free.

Dozens died in 2014 when a guesthouse at his headquarters in Lagos, Nigeria, collapsed, and church workers initially prevented emergency officials from helping rescue people trapped in the rubble.

Mr. Joshua called himself a prophet and regularly made prophecies on his Facebook page. In one of these, he said that he saw the winner of the U.S. presidential election in 2016 and that it was a woman. The post was later deleted.

In 2011, Forbes said he was the third-wealthiest pastor in Nigeria, with a net worth of $10 million to $15 million.

“God has taken His servant Prophet TB Joshua home — as it should be by divine will,” the announcement on Facebook read on Sunday. “His last moments on earth were spent in the service of God. This is what he was born for, lived for and died for.”