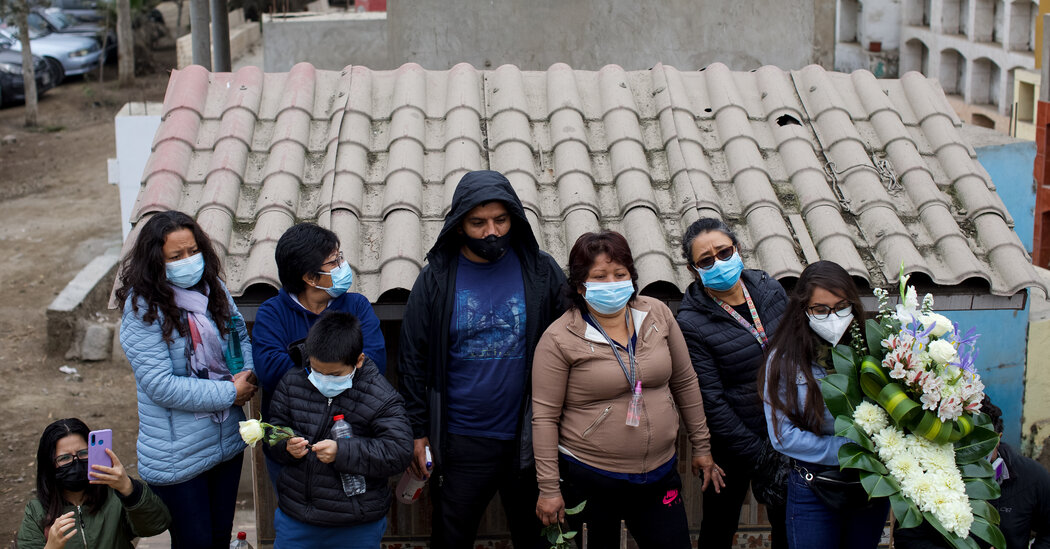 Many of the world’s poorest nations are living through their deadliest outbreaks of the pandemic, with few signs that a significant number of vaccine doses will be available to reverse that tide anytime soon.

Billion-dollar pledges to help them buy doses — and last week’s announcement that the United States will distribute an initial supply of 25 million doses around the world this month — will do little to curb the explosive outbreaks in countries including Argentina, Malaysia and Botswana, experts said. India, the world’s largest producer of vaccines, won’t export any for the rest of the year as it confronts a crushing virus wave. And Covax, the global vaccine-sharing program that the poorest nations rely on, is struggling to raise money and find doses to buy.

The World Health Organization estimates that 11 billion doses need to be administered worldwide to stamp out the pandemic.

Scientists warn that as long as the virus runs rampant in much of the world, virus variants have time to mutate and possibly evolve the ability to evade vaccines.

The vaccine shortfall is widest in Africa, where about 3 percent of 1.2 billion people across more than 50 countries have received one shot, and the World Health Organization reported last week that eight countries had seen cases surge 30 percent or more in the previous seven days. Compare that with the United States, where more than 60 percent of people have received one dose, and new cases have dropped 80 percent since mid-April.

The efforts to help poorer countries are “a baby step,” said Dr. Peter Hotez, a vaccine expert at Baylor College of Medicine in Houston. “The donations to date are so modest you really won’t have much of an impact,” he said. “I don’t think any of the efforts from the U.S. even come close to recognizing the scope and magnitude of the problem.”

But experts say it’s not just a problem of political will. There is a huge bottleneck in the global vaccine supply, with the Serum Institute of India saying that it won’t resume exports until next year as it saves doses to inoculate Indians. And mishaps at factories in the United States have forced producers to sit on 100 million doses as regulators review whether they were tainted.

Last year, rich nations including the United States, Britain and Germany rushed to lock up supplies of vaccines even before it was clear that they were effective against the coronavirus. That early stockpiling has meant that of the roughly two billion vaccine doses that have been administered globally, about 85 percent have gone to the wealthiest nations. The world’s poorest, according to data tracked by the The New York Times, have administered just 0.3 percent of those doses.

Covax, which set a goal of delivering two billion doses by the end of the year for the world’s poorest countries, has distributed about 100 million doses so far.

At a virtual summit last week hosted by the Japanese government and Gavi, the Vaccine Alliance, wealthy countries — along with foundations and private companies — pledged $2.4 billion to Covax. Additionally, five countries — Belgium, Denmark, Japan, Spain and Sweden — said they would share a total of 54 million doses.

Dr. Hotez said that scaling production is “our only hope” to truly make a difference in global vaccine distribution, and that the United States needs to lead the effort, not just in ramping up production but also delivery.

In addition to scaling production, wealthy countries must share more of the doses they don’t need, said Henrietta Fore, executive director of the U.N. Children’s Fund.

As leaders of the Group of 7 industrialized nations prepare to meet in Britain next weekend, UNICEF urged them to consider donating 20 percent of their available supplies from June through August as “an important emergency stopgap measure,” Ms. Fore said.

But even if wealthy countries agree to share more vaccines, hundreds of millions of dollars will be needed to ship doses, train health care workers, and provide personal protective equipment and technical assistance, Ms. Fore said.

“We need dedicated funding to get vaccines off the tarmac and into the arms of those who need them,” she said.

In a statement, Gavi said that last week’s donations and pledges of doses had put the global vaccination effort “on a path towards ending the acute phase of the pandemic.”

The organization acknowledged, however, that deliveries of those vaccines would not begin to ramp up until after September.

Globally, surges later this year might be even worse. Dr. Hotez said he was especially concerned about the Democratic Republic of Congo, where cases are rising and vaccine distribution is lagging. Over the past two weeks, Congo has reported an average of almost 200 new cases per day, although experts say the true number is likely much higher because of lack of testing.

What’s happening there may be “the beginning of something terrible, and that’s what really concerns me,” Dr. Hotez said. “The urgency is greater than ever.”