In a joint press conference Tuesday afternoon, the heads of the Haredi political parties Shas and United Torah Judaism launched a stunning assault on the leader of the Yamina party and prime minister-designate, Naftali Bennett.

With the so-called change government set to be sworn in on Sunday and the ultra-Orthodox headed for the opposition, Haredi leaders branded Bennett as “wicked” and claimed his new government’s policies would endanger the Jewish state.

Bennett, who is set to become Israel’s first Orthodox prime minister, dismissed the attack as embarrassing and unhinged, a “hysterical outburst,” and vowed he would safeguard religious life in the country.

The coalition agreements signed by the parties have yet to be formally made public but will reportedly include advancing an IDF draft bill for some yeshiva students.

Other issues, including reforms on conversion to Judaism, civil unions, public transportation and the opening of supermarkets on Shabbat, appeared in some early drafts but were removed from the final document, Channel 12 said.

Still, Shas leader Aryeh Deri asserted that a government headed by Bennett “is going to destroy and ruin everything we have maintained for years. A government headed by Bennett will destroy Shabbat, conversion, the Chief Rabbinate, kashrut and will tear the people of Israel asunder,” he said. “For the sake of his personal ambition, Bennett is throwing away everything that is important to the Jewish people.” 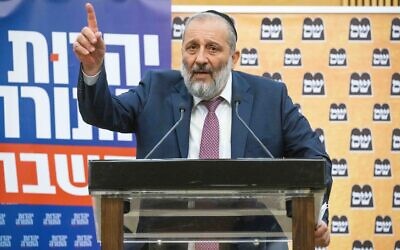 “The Jewish state is in danger!” Deri proclaimed. “The State of Israel is changing its face and its character and its identity. This isn’t a separation of religion and state, but an uprooting of religion from the state.”

“We will cry out to heaven and earth… against the behavior of this man who ostensibly wears a kippa,” Gafni said of Bennett. “From the beginning, we knew that this is what he wants — he wants there to be an anti-religious government, a secular government.”

Gafni said that the Haredi parties would not allow Bennett to appoint national-religious rabbis to head local religious councils or to the Chief Rabbinate. “We won’t allow this in any way,” he declared. “There will be a war on all fronts, there will be nothing he can do — this wicked one!”

Gafni called on Yamina voters and other national-religious supporters to “purge these people from among you, so that they will be excommunicated and ostracized.” 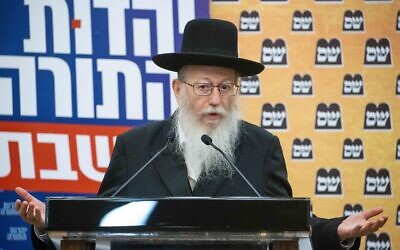 Deri slammed the establishment of a government “thanks to kippa wearers blinded by a thirst for power, who are going to fulfill the longtime dream of Meretz, Labor, Lapid, [Avigdor] Liberman and the Reform Movement together.”

Litzman called Bennett a Reform Jew, a denigration of the highest order in the Haredi world.

“If he signs all of these coalition agreements, he’s Reform — there’s no difference between them,” Litzman said. “He should take off his kippa… so at least people can understand that he’s Reform.” 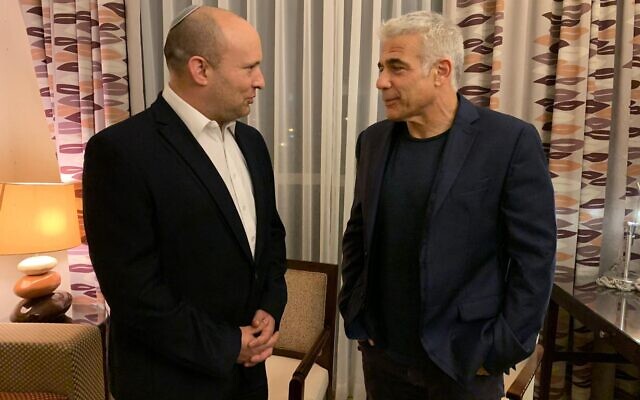 Yamina chief Naftali Bennett and Yesh Atid leader Yair Lapid are seen on Wednesday evening, as they inform President Reuven Rivlin they have succeeded in forming a government, June 2, 2021. (Courtesy)

Bennett said he was “disappointed” by the harangue. “These are comments that do not gain them any respect, and reflect a loss of control,” he said in a statement.

“Only a year ago when the current unity government was formed, Yamina was left out and the Haredim were in. You did not see me calling on Gafni to take off his kippa. There was a government, we were not part of it, and the sun still rose in the morning,” Bennett added.

“The ultra-Orthodox MKs will not teach us what Judaism is, and certainly not what Zionism is. As prime minister, I will take care of ultra-Orthodox society and the world of Torah,” he said. 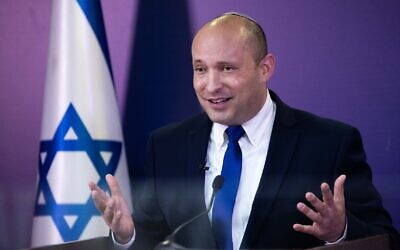 Bennett added that “if the intention of this hysterical outburst is to deter us from the intention to establish a state commission of inquiry into the Meron disaster — it will not work.”

“Forty-five people died, someone needs to provide an answer,” he said, apparently in response to Haredi parties blocking attempts to establish a probe into the April disaster.

The eight-party “change government” alliance, headed by Bennett and Lapid, anticipates winning a 61-59 majority in a confidence vote slated for Sunday, after wavering Yamina MK Nir Orbach said Tuesday he would back the new coalition.

The timing of the vote means that all coalition agreements must be formally handed to the Knesset and made public by Friday.