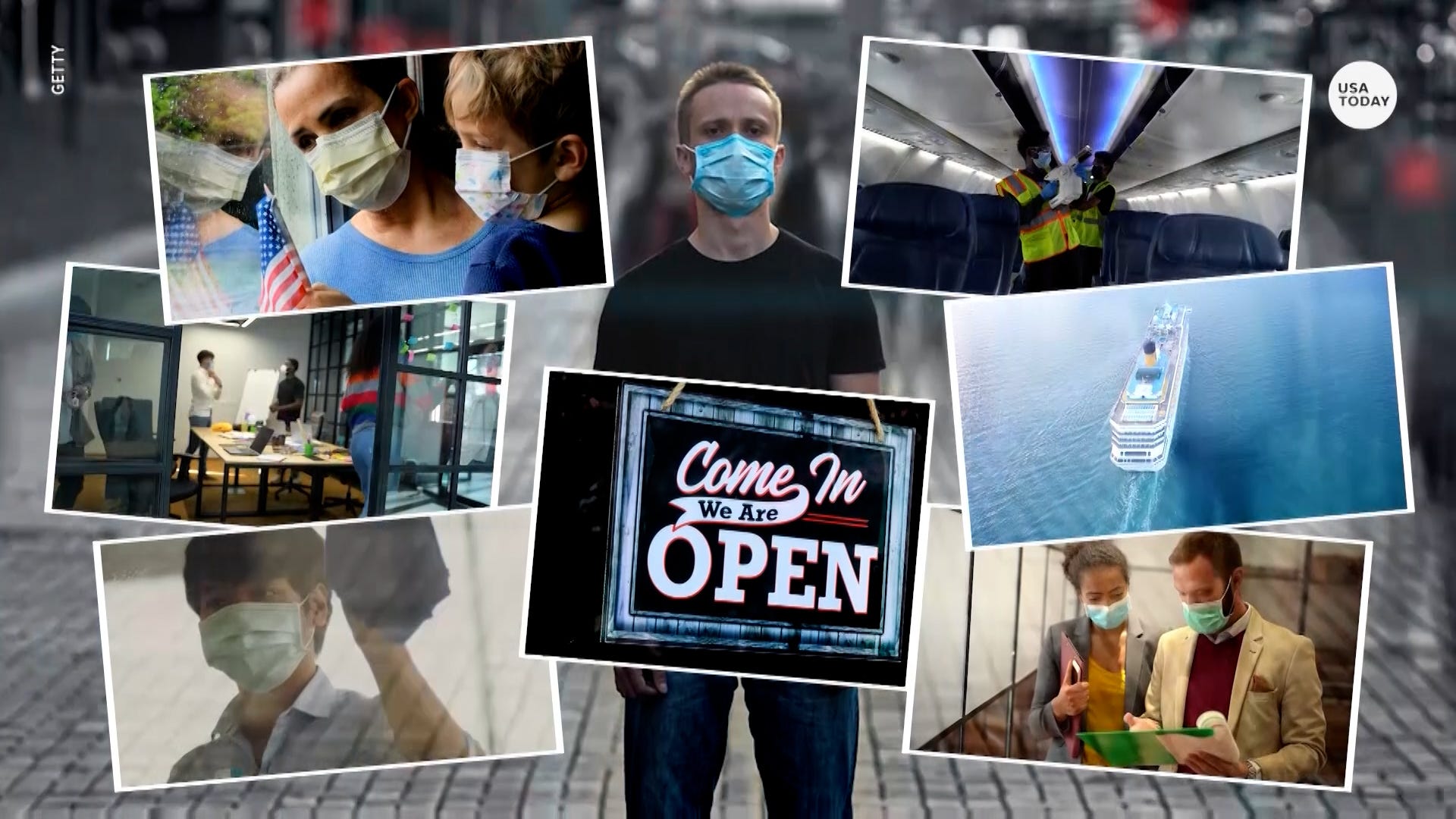 COVID-19 and the ‘new normal’ for travel, the workplace, mental health

More than a year after the world went on lockdown because of COVID-19, America is slowly opening up again. But our lives will never look the same.

The seven-day average of new, daily coronavirus cases dropped to 13,277, the first time it has fallen below 15,000 since the first weeks of the pandemic in March of 2020, top U.S. health officials said Tuesday.

The daily average has dropped to one-third the average number of cases seen just three weeks ago. Five months ago the U.S. was seeing 15,000 cases every 90 minutes.

Dr. Rochelle Walensky, director of the Centers for Disease Control and Prevention, said barely more than 10,000 new cases were reported Monday. She noted that deaths and hospitalizations related to COVID-19 also have continued their precipitous decline.

Walensky credited the 300 million-plus vaccination shots already administered across the nation for the encouraging numbers.

“It gives me so much hope,” she said. “Each week there are more and more data to demonstrate the impact vaccination has on preventing this disease and moving us out of this pandemic.”

“Threats remain,” warned Andy Slavitt, who on Wednesday leaves his post as White House senior adviser for COVID-19 response. “We must push harder so more Americans can return to normal life and the peace of mind that come with being vaccinated.”

►The Toronto-based Mastercard Foundation says it will spend $1.3 billion over the next three years to acquire and deliver COVID-19 vaccines for more than 50 million people in Africa, with plans to rely on the single-shot Johnson & Johnson vaccine.

►Spain this week started to allow in fully vaccinated Americans along with unvaccinated minor children. Austria has said it will admit Americans as long as they’ve had at least one round of COVID vaccine.

►Two-thirds of Major League Baseball’s 30 teams have been able to relax coronavirus protocols after four additional clubs qualified and raised the total to 20 franchises reaching 85% vaccinations for players and other on-field personnel.

📈 Today’s numbers: The U.S. has more than 33.3 million confirmed coronavirus cases and more than 598,000 deaths, according to Johns Hopkins University data. The global totals: Over 173.7 million cases and over 3.73 million deaths. Nearly 140 million Americans have been fully vaccinated — 42.1% of the population, according to the CDC.

📘 What we’re reading: The COVID-19 pandemic barely registered as a blip as humanity continued to spew carbon dioxide into Earth’s atmosphere. Read the full story.

Keep refreshing this page for the latest updates. Want more? Sign up for our Coronavirus Watch newsletter for updates to your inbox and join our Facebook group.

Pfizer released new details Tuesday about the progress of its COVID-19 vaccination trials in children, showing the company has completed early testing and is moving forward with lower-dose trials in younger kids. Children are less likely than adults to have a serious case of COVID-19 so drug companies are trying to minimize vaccine side effects while maximizing benefits. For now, Pfizer, which collaborates with German biotech firm BioNTech, is testing its vaccine in grade schoolers at lower doses than adolescents and still lower doses in younger children.

Moderna and Johnson & Johnson, which also make COVID-19 vaccines authorized in the U.S., are testing their shots in children as well.

India’s daily coronavirus infections have dropped below 100,000 for the first time in more than two months, as the monstrous surge that beset the country last month has receded. At one point in May, India was reporting more than 400,000 new cases per day. Deaths across the country of nearly 1.4 billion have declined as well, and the combination has prompted some states to relax restrictions.

The latest daily tally of 86,498 new infections pushed India’s total past 29 million Tuesday, second only to the U.S. The Health Ministry also reported 2,123 new fatalities in the past 24 hours, still horrific but about half of the May peak. Both the case number and the 351,309 total reported deaths are considered vast undercounts.

India’s government is trying to accelerate its lagging vaccine program and provide free shots. Less than 5% of the population is fully vaccinated.

The Washington state Liquor and Cannabis Board said this week it will allow state-licensed cannabis retailers to “provide one joint to adult consumers who receive COVID-19 vaccination at an in-store vaccination clinic.”

The program is the latest incentive in the state’s push to get 70% of its adults at least partially vaccinated by month’s end.

Gov. Jay Inslee has said reaching that mark would allow elimination of most remaining coronavirus-driven restrictions across the state. Inslee unveiled the “Shot of a Lifetime” campaign aimed at promoting vaccination in the state, and the board previously approved free beer, wine or cocktails for those vaccinated by June 30.

Hotels and office buildings are reopening after remaining dormant for a year or more, and building engineers are keeping a watchful eye for Legionnaires’ disease.

Legionella pneumophila, the bacteria that causes the illness, most often becomes a problem when it sits in stagnant, lukewarm, unchlorinated water and multiplies, said Michelle Swanson, a professor of microbiology at the University of Michigan. That could be a problem in some closed buildings where water has not moved through pipes since the pandemic began.

“It’s almost certain that we’re going to be at risk for more Legionnaires’ disease cases after the shutdown,” said Swanson, a member of a National Academies of Sciences committee that wrote a report in 2020 on the management of Legionella in water systems.

The hypothesis claiming the coronavirus leaked from a Wuhan lab is “plausible” and deserves further investigation, a report on the origins of COVID-19 from a U.S. government laboratory said. The study, prepared in May 2020, was received that October by the State Department when it investigated the pandemic’s origins, reported the Wall Street Journal, citing people familiar with the classified document.

The report comes as questions grow about whether the virus was the result of an accident in a Chinese laboratory or spread through other means. President Joe Biden has ordered the intelligence community to report on the origins in a matter of months.

A large trial for Novavax’s COVID vaccine candidate is about to end in the U.S., and research president Dr. Gregory Glenn told an audience at a recent webinar that “we anticipate filing for authorization in the U.K., U.S. and Europe in the third quarter,” meaning July to September, NPR reported. Novavax is one of five companies that received large sums of money from the federal government for developing and/or manufacturing COVID-19 vaccines.

In the U.K., the company reported that its vaccine had protected against all severe disease and was better than 96% effective against any disease from the original strain of the coronavirus, and had 86% efficacy against the variant first seen in the U.K., now known as Alpha. The vaccine was 55% effective in a smaller trial among HIV-negative participants in South Africa, where another variant, now called Beta, was prevalent.

By the middle of last year, the number of people in jails nationwide was at its lowest point in more than two decades, according to a new report published Monday by the Vera Institute of Justice, whose researchers collected population numbers from about half of the nation’s 3,300 jails to make national estimates.

According to the report, shared with The Marshall Project and The Associated Press, the number of people incarcerated in county jails across the country declined by roughly one-quarter, or 185,000, as counties aggressively worked to release people held on low-level charges, dramatically reduced arrest rates and suspended court operations.

But in most places, the decrease didn’t last long: From mid-2020 to March 2021, the number of people in jails awaiting trial or serving short sentences for minor offenses climbed back up again by more than 70,000, reaching nearly 650,000.

“Reducing the incarcerated population across the country is possible,” said Jacob Kang-Brown, a senior research associate at the Vera Institute of Justice and author of the new report. “We saw decreases in big cities, small cities, rural counties and the suburbs, but the increase we see is troubling.”