At least 11 people were reportedly killed overnight Wednesday in Israeli airstrikes in Syria.

According to the Syrian Observatory for Human Rights — a pro-Syrian opposition organization of uncertain funding based in the UK — the government troops and militiamen were killed in Homs Province in central Syria.

The monitor’s director, Rami Abdul Rahman, told AFP that “at least seven army soldiers and four National Defence Forces militiamen were killed” in the strikes shortly before midnight, adding that all of the dead were Syrian.

The Observatory has regularly been accused by Syrian war analysts of inflating casualty numbers, as well as inventing them wholesale.

The purported Israeli Air Force strike is the first attack in Syria attributed to Israel in more than a month.

According to a military source cited by the Syrian state news agency Sana, air defense systems managed to shoot down some Israeli missiles that were fired from the direction of Lebanon after 11:30 p.m., while others caused damage.

“Our air defense array confronted the aggression’s missiles and shot down some of them, and there were material losses only,” the source was quoted as saying earlier in the evening.

Defense analysts routinely dismiss such claims by the Syrian regime as empty boasts. 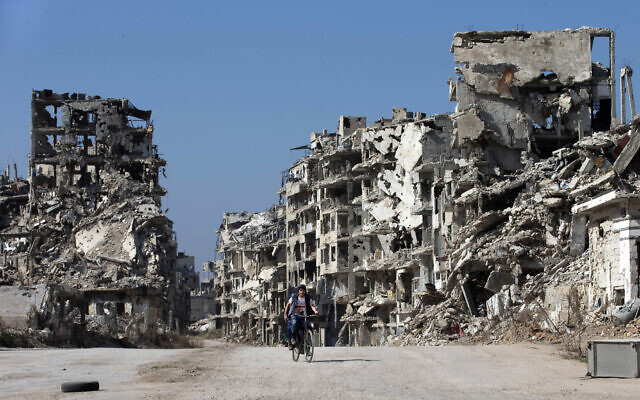 A Syrian boy rides a bicycle through a devastated part of the old city of Homs, Syria, February 26, 2016. (Hassan Ammar/AP)

The Observatory said the strikes targeted air force positions near the village of Khirbet al-Tin on the outskirts of Homs, as well as an arms depot belonging to the Lebanese Hezbollah terror group.

The Israeli air force carried out Tuesday evening strikes in several regions of Syria, in the capital Damascus as well as in Homs, Hama and Latakia provinces, the Observatory said.

The Israeli army, which rarely acknowledges its strikes in Syria, told AFP it would not comment on “information coming from abroad.”

The pace of attacks has slowed considerably in recent months, with the last reported strikes taking place May 5 and 6 on sites in Latakia and near Quneitra. One civilian was reported killed in the May 5 strike.