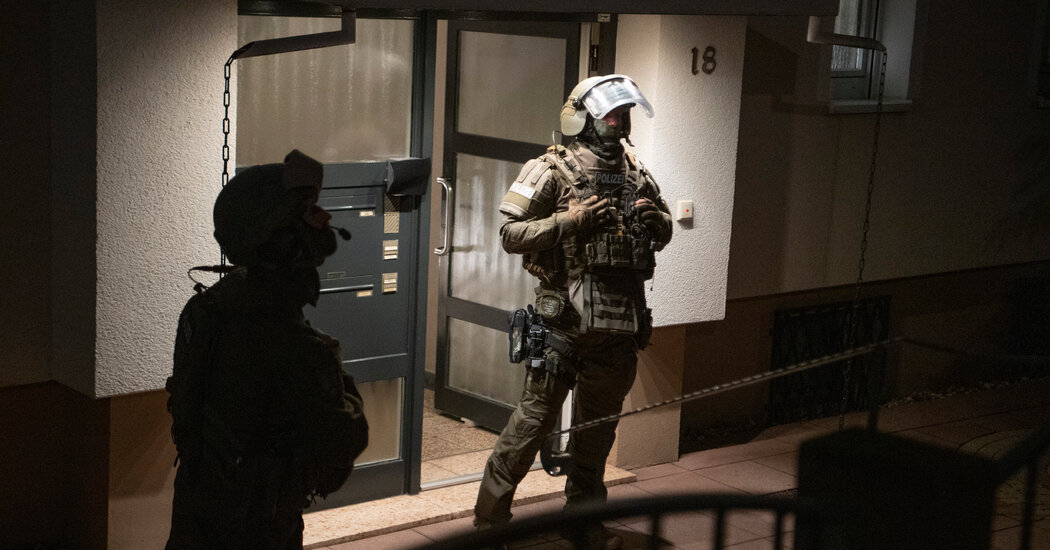 BERLIN — The German authorities disbanded an elite state police unit and suspended 18 of its active members after they were found to have been involved in a chat group that exchanged racist messages and glorified the Nazis, the interior minister of Hesse said on Thursday.

The move against the unit — roughly analogous to a S.W.A.T. team in the United States — in Frankfurt is the latest by German authorities to clamp down on a rise in far-right networks in several state security units and in the military. Police officers in several states have been fired or reprimanded for their participation in such chat groups, where content like swastikas, Hitler images and anti-foreigner postings are shared over social media.

In the central state of Hesse alone, the latest revelations bring the number of police officers who have been or are under investigation for far-right sympathies to nearly 100. Günter Rudolph, a Social Democratic state lawmaker, described the Frankfurt case as offering “staggering evidence of a profound problem in Hesse’s police force.”

The recently discovered chat group included three supervising officers of the elite squad, though they appear to have been inactive, making the disbandment of the entire unit unavoidable, according to the state authorities.

The 18 suspended officers face charges in connection with communicating symbols banned by the constitution and racist hate content, and the supervisors will face additional charges for failing to intervene or report the chats.

“The unacceptable misconduct of several members as well as the turning a blind eye of immediate superiors in the S.E.K. Frankfurt has made its complete dissolution necessary,” Peter Beuth, the state interior minister of Hesse said in a statement, referring to the S.W.A.T.-like unit by its German initials.

Mr. Rudolph and other state lawmakers have criticized the police and conservative state government leaders, including Mr. Beuth, for their inclination to dismiss episodes involving police officers with right-wing tendencies as solitary cases, ignoring the broader problem of like-minded groups and individuals across the country.

In the most significant development of the country’s efforts to stamp out extremism in law enforcement and the military, the defense ministry was forced last year to disband a full fighting company of the country’s most elite special forces unit, known by its German initials, K.S.K., because of right-wing infiltration.

The authorities took the dramatic move after the authorities conducted a wide-ranging investigation into far-right structures within the unit and just six weeks after authorities dug up an illegal weapons cache in the backyard of one of the company’s soldiers.

The chat room was most active in 2016 and 2017, according to officials, and it was found by coincidence when the mobile devices of a member of the unit were analyzed for child pornography in an unconnected case.

The state attorney’s office in Frankfurt has been investigating 20 men between the ages of 29 and 54 who belonged to two different chat groups, where they mocked refugees and shared Nazi symbols. Of those, 18 were active duty S.E.K. members, one was in another police unit and one was already retired.

The investigation was first made public on Wednesday, when authorities raided 6 dwellings and suspended all 18 elite police officers from duty.

The police in Frankfurt, where the elite unit was based, have come under scrutiny in the past. A series of far-right threats to immigrant activists, lawyers and politicians that started in 2018 were traced back to police computers in the city.

In one case, a police computer that was used to gain access to the personal information of a female lawyer who had been threatened was linked to a police officer who belonged to a separate far-right chat group.

Last month, the police arrested a man in Berlin for making those threats. While the man was not affiliated with the police, those who have been threatened suspect sympathetic members of the police force were involved in the matter.

Stefan Müller, a chief of state police in Hesse, said the state police would rebuild an S.E.K. unit to replace the old one, but it would be restructured with a stronger emphasis on accountable leadership.

“They are one of the guarantors of security and must therefore be all the more free of unacceptable misconduct,” he said.