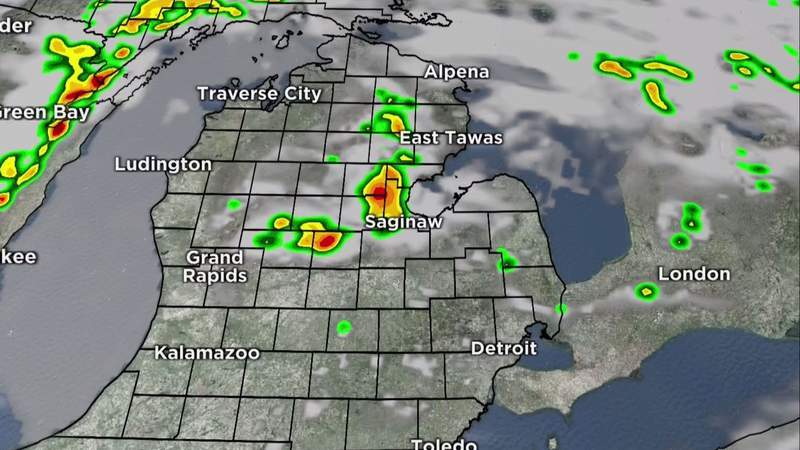 We hope you were able to catch the partial solar eclipse this morning! It ended at 6:37 a.m.

Our Thursday will feature mostly sunny to partly cloudy skies, with only an isolated thunderstorm possible this afternoon. The best chance to see one (and it’s still a small chance) is generally west of US-23. Highs will once again reach the mid 80s, with just a light wind from the east.

Thursday night will be mostly clear with lows in the mid 60s and calm air.

Friday will be mostly sunny to partly cloudy, and I cannot rule out at late day or early evening scattered shower. Highs will be in the upper 80s. It will be mostly clear Friday night, with lows in the mid 60s.

The first half of Saturday will be nice, with mostly sunny to partly cloudy skies. Then an approaching cold front will trigger scattered showers and thunderstorms by late afternoon. Highs will be in the mid to upper 80s.

Scattered showers and possible thunderstorm chances will continue Saturday night, with low in the mid 60s.

IF there are still any showers around at dawn Sunday, they will quickly move out, and the day ahead should be partly cloudy to mostly sunny, with highs in the mid-to-upper 80s.

Relief from the heat

A pattern change will occur early next week that will finally bring relief from the heat (for those who don’t like it).

Monday will be warm day, then get ready for upper 70s to low 80s Tuesday and Wednesday, before things start warming up again for the end of the week into next weekend.

Remember to download the FREE Local4Casters weather app — it’s easily one of the best in the nation. Just search your app store under WDIV and it’s right there available for both iPhones and Androids! Or click the appropriate link below.