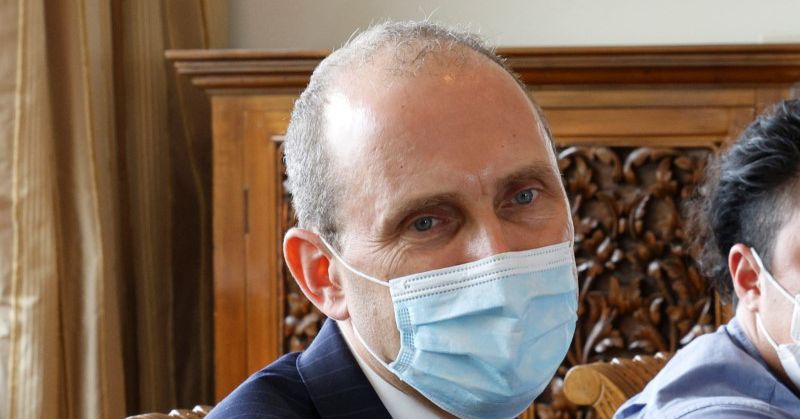 The top U.S. diplomat in Hong Kong said the imposition of a new national security law had created an “atmosphere of coercion” that threatens both the city’s freedoms and its standing as an international business hub.

In unusually strident remarks to Reuters this week, U.S. Consul-General Hanscom Smith called it “appalling” that Beijing’s influence had “vilified” routine diplomatic activities such as meeting local activists, part of a government crackdown on foreign forces that was “casting a pall over the city”.

Smith’s remarks highlight deepening concerns over Hong Kong’s sharply deteriorating freedoms among many officials in the administration of President Joe Biden one year after China’s parliament imposed the law. Critics of the legislation say the law has crushed the city’s democratic opposition, civil society and Western-style freedoms.

The foreign forces issue is at the heart of the crimes of “collusion” with foreign countries or “external elements” detailed in Article 29 of the security law, scholars say.

Article 29 outlaws a range of direct or indirect links with a “foreign country or an institution, organisation or individual” outside greater China, covering offences from the stealing of secrets and waging war to engaging in “hostile activities” and “provoking hatred”. They can be punished by up to life in prison.

“People … don’t know where the red lines are, and it creates an atmosphere that’s not just bad for fundamental freedoms, it’s bad for business,” Smith said.

“You can’t have it both ways,” he added. “You can’t purport to be this global hub and at the same time invoke this kind of propaganda language criticising foreigners.”

Smith is a career U.S. foreign service officer who has deep experience in China and the wider region, serving in Shanghai, Beijing and Taiwan before arriving in Hong Kong in July 2019. He made his comments in an interview at the U.S. diplomatic mission in Hong Kong on Wednesday after Reuters sought the consulate’s views on the impact of the national security law.

In a response to Reuters, Hong Kong’s Security Bureau said that “normal interactions and activities” were protected, and blamed external elements for interfering in the city during the protests that engulfed Hong Kong in 2019.

“There are indications in investigations and intelligence that foreign intervention was rampant with money, supplies and other forms of support,” a representative said. He did not to identify specific individuals or groups.

Government adviser and former security chief Regina Ip told Reuters it was only “China haters” who had reason to worry about falling afoul of the law.

“There must be criminal intent, not just casual chat,” she said.

Smith’s comments come as other envoys, business people and activists have told Reuters of the chilling effect on their relationships and connections across China’s most international city.

Private investigators say demand is surging among law firms, hedge funds and other businesses for security sweeps of offices and communications for surveillance tools, while diplomats describe discreet meetings with opposition figures, academics and clergy.

Fourteen Asian and Western diplomats who spoke to Reuters for this story said they were alarmed at attempts by Hong Kong prosecutors to treat links between local politicians and foreign envoys as potential national security threats.

In April, a judge cited emails from the U.S. mission to former democratic legislator Jeremy Tam as a reason to deny him bail on a charge of conspiracy to commit subversion. Tam, one of 47 pro-democracy politicians charged, is in jail awaiting trial; his lawyer did not immediately respond to a request for comment.

“It’s appalling that people would take a routine interaction with a foreign government representative and attribute something sinister to it,” Smith said, adding that the consulate did not want to put anyone in an “awkward situation.”

In the latest ratcheting up of tensions with Western nations, Hong Kong on Friday slammed a U.K. government report that said Beijing was using the security law to “drastically curtail freedoms” in the city. read more

Although local officials said last year the security law would only affect a “tiny minority” of people, more than 100 have been arrested under the law, which has affected education, media, civil society and religious freedoms among other areas, according to those interviewed for this story.

Some have raised concerns that the provisions would hurt the business community, a suggestion Ip dismissed.

“I think they have nothing to worry about unless they are bent on using external forces to harm Hong Kong,” Ip said. “I speak to a lot of businessmen who are very bullish about the economic situation.”

Retired judges familiar with cases such as Jeremy Tam’s said they were shocked at the broad use of foreign connections by prosecutors. One told Reuters he did not see how that approach would be sustainable, as the government accredits diplomats, whose job is to meet people, including politicians.

Hong Kong’s judiciary said it would not comment on individual cases.

“It’s been very distressing to see this relentless onslaught on Hong Kong’s freedoms and back-tracking on the commitment that was made to preserve Hong Kong’s autonomy,” he said.