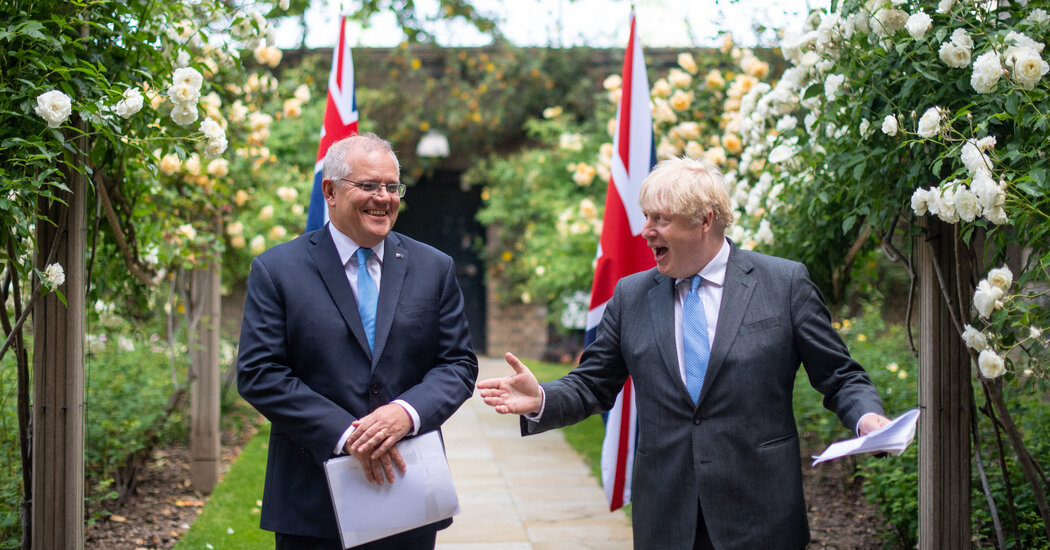 About half of Britain’s trade is with the European Union, and the drop in trade could never be compensated for by joining, say, the Asian trading pact, Mr. Gasiorek said. “It’s clearly much more important to sort out our trading relations with the E.U. and to think closely about that relationship, but that’s not what the priority of this government is,” he said.

The Australian deal is important because it will set the standard for how much Parliament will be able to alter trade deals, said Sally Jones, a trade expert at EY. Even though the deal will have only a small economic impact, its provisions on digital trade, or sustainability, could have significant influence, she said.

Britain has spent the past week brandishing its credentials as a leader on climate change as the host of the Group of 7 meetings, and some industry leaders have raised concern that a trade deal with a country on the other side of the world would have insufficient climate-change protections.

In Australia, the deal has been welcomed by the meat and wine industries, two of the industries expected to gain the most from the agreement.

“It is just the tonic the Australian wine sector has needed as it moves quickly to reposition itself after the market into China was closed by the imposition of prohibitive tariffs,” said Tony Battaglene, the chief executive of Australian Grape and Wine, the country’s national association for wine producers.

“This is a great opportunity for the Australian red meat industry,” said Patrick Hutchinson, the chief executive of the Australian Meat Industry Council.

But there are concerns about the removal of a longtime provision that allows young British travelers to extend their visa for a year by working three months on a farm. The Australian horticulture sector has been struggling to find fruit and vegetable pickers after the backpackers that made up a significant part of its work force were shut out of the country because of Australia’s pandemic border closures.