LISBON, Portugal — The city council of Lisbon has for years provided foreign embassies with personal information about protesters who organize demonstrations outside their premises, the Portuguese capital’s mayor said Friday.

The practice continued even after a new data protection law that took effect in 2018 made it illegal, Mayor Fernando Medina said.

Medina did not specify which embassies were informed, but he gave an example of information provided to the Israeli Embassy in 2011 to show that previous council leaders had followed the same procedure. The information provided at that time named at least one person who took part in the protest against Israeli conduct in Palestinian territories, he said.

The mayor spoke as he published the results of a preliminary internal audit into why the city council shared with Russian officials personal details of at least three Lisbon-based dissidents. The dissidents organized a protest in Lisbon five months ago in support of jailed Russian opposition leader Alexei Navalny.

The information-sharing, first reported by Portuguese newspapers Expresso and Observador earlier this month, caused a scandal.

Medina said the audit found that the personal details of protesters had been sent to embassies 52 times since 2018. A broader audit is now looking into pre-2018 cases.

The council’s rules on informing embassies about the identity of protesters are unclear despite the data protection law, he said. Council procedures say information should be sent to “the proper authorities.” For many years, that was understood to mean sending the details to Portuguese police, the government and diplomatic representations targeted by protests. 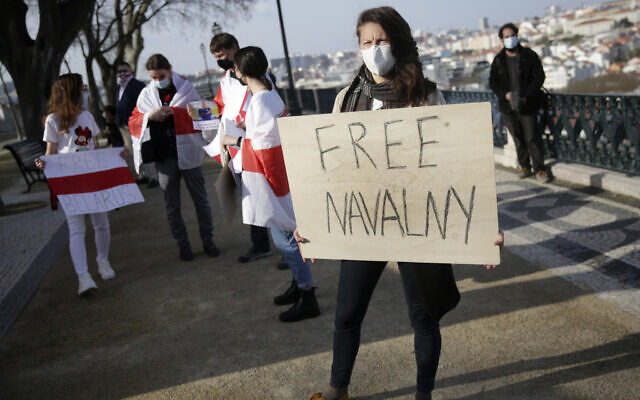 Ksenia Ashrafullina holds a poster during a protest demanding freedom for political prisoners organized by a Belorussian cultural association, in Lisbon, March 6, 2021. The mayor of Lisbon is under fire after admitting that municipal employees shared with Russian officials personal details of Ashrafullina and at least two other Lisbon-based dissidents who organized protests in support of Russian jailed opposition leader Alexei Navalny. (AP Photo/Armando Franca)

Recommendations to change the procedures, especially after the 2018 law change, were unheeded, and the council’s data protection officer is to be fired, Medina said

In the future, the council will provide information about protest organizers – who must request the council’s permission to hold demonstrations – only to the Portuguese police and government, according to Medina.

Police will offer to conduct a “security analysis” to assess the safety of the individuals whose information was shared with foreign powers, he said.