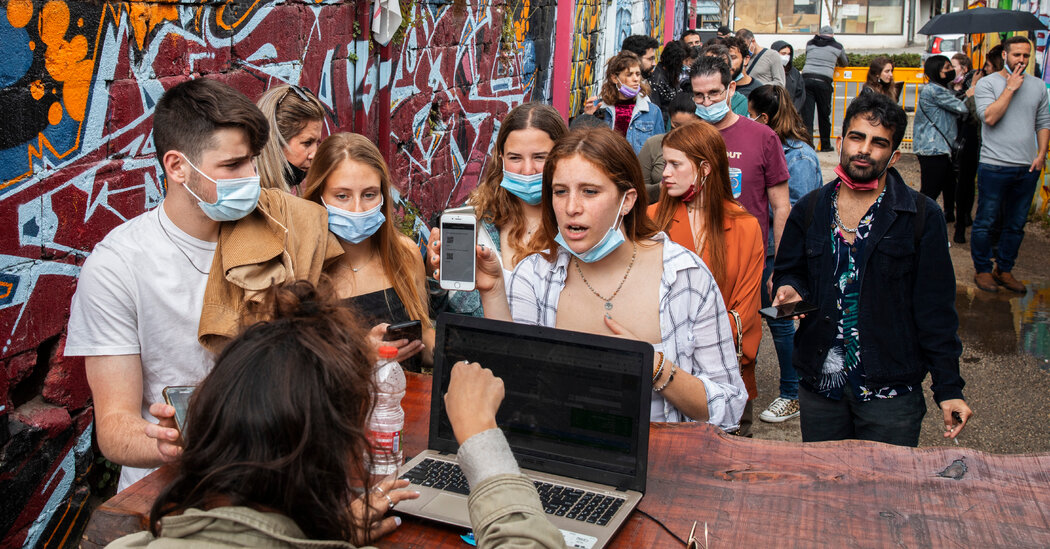 JERUSALEM — Israel has been a trailblazer in the post-pandemic world, largely returning to normal in May following one of the world’s fastest vaccination drives.

But dozens of new cases recently emerged at schools in two cities, Modiin and Binyamina, leading to hundreds of people being quarantined. Israel has made 12- to 15-year-olds eligible for vaccination, but many have yet to get shots.

The containment effort has struggled to have an impact. The virus spread through several cities, infecting more than 700 people. Many had been vaccinated against Covid, according to the director general of the Health Ministry, Prof. Chezy Levy, though he did not specify if they had had one or two doses.

The Delta variant is unlikely to pose much risk to people who have been fully vaccinated, experts have said. The country has relied on the two-dose mRNA vaccines made by Pfizer-BioNTech and Moderna.

Despite the new outbreak, the country’s current death rate remains close to zero, and only 26 of 729 active coronavirus patients were hospitalized, according to data released by the Health Ministry. And the overall daily caseload remains far from the country’s peak in mid-January, when the average hit more than 8,000 daily cases.

Some Israeli officials and health experts have attributed the outbreaks to the Delta variant, and point to international travelers as a potential source of the outbreaks.

According to Anat Danieli, a Health Ministry spokeswoman, the Delta variant had been identified in 180 samples as of last Sunday. But it was unclear how many of the new cases involved the variant, as the testing can take up to 10 days.

Since last Saturday, the country’s rolling seven-day average of new cases has grown from less than 25 to more than 72, according to the Our World in Data project at Oxford University.

Before the recent outbreak, the daily caseload had fallen close to zero. About 57 percent of the country’s population has already been given two shots of Covid vaccine.

To deal with the sudden outbreak, the Israeli prime minister, Naftali Bennett, reinstated a ministerial crisis committee, known as the coronavirus cabinet. On Wednesday, Israel’s Tourism Ministry said that it would postpone its resumption of issuing individual tourist visas from July 1 to Aug. 1.

Israeli officials fear the country may have eased too many of its anti-virus restrictions too quickly, and on Thursday, the Health Ministry said that the government would assess whether to reintroduce a requirement to wear masks in indoor public places should the daily caseload exceed 100.

The announcement came less than two weeks after the country’s indoor mask mandate was lifted and less than a month after the end of capacity restrictions in public spaces, as well as the requirement to show proof of full vaccination against the coronavirus.

Sorgente articolo:
Israel Grapples With Covid Outbreak That Some Link to Delta – The New York Times