Iranian ultraconservative cleric Ebrahim Raisi was sworn in on Thursday as the Islamic Republic’s eighth president, promising to pursue the country’s “legal rights,” but also not ruling out diplomacy with the West to ease economic sanctions.

Raisi, who is expected to take a less conciliatory approach than his predecessor, comes into office as high-stakes talk for the resumption of the 2015 nuclear pact have stalled, and with tit-for-tat sabotage attacks between Israel and Iran threatening to snowball into open conflict.

“The policy of pressure and sanctions will not cause the nation of Iran to back down from following up on its legal rights,” Raisi said in a parliamentary ceremony broadcast live on state television, referring to the country’s nuclear program.

The decision of former United States president Donald Trump to withdraw from Iran’s nuclear deal in 2018 has led Tehran, over time, to abandon every limitation on nuclear enrichment.

The country now enriches a small amount of uranium up to 63 percent, a short step from weapons-grade levels, compared to the 3.67% enrichment permitted under the deal. It also spins far more advanced centrifuges and at a higher quantity than allowed under the accord, worrying nuclear nonproliferation experts, though Tehran insists its program is peaceful.

Raisi was elected in a landslide June election marked by low turnout as Iranians protested the disqualifications of nearly all other candidates by the country’s Islamist leadership. 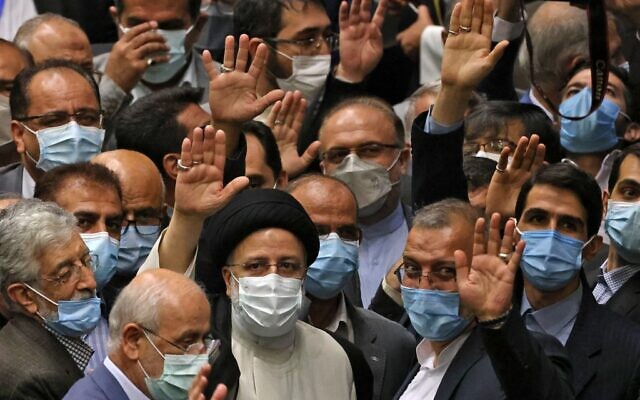 Iran’s newly elected President Ebrahim Raisi (C) gestures during his swearing in ceremony at the Iranian parliament in the capital Tehran, on August 5, 2021. (Atta Kenare/AFP)

His inauguration completes hardliners’ dominance of all branches of government in the Islamic Republic.

He took over from moderate Hassan Rouhani, whose landmark achievement during his two-term presidency was the 2015 nuclear agreement between the Islamic Republic and six world powers.

Current US President Joe Biden has sought to reenter the deal via indirect talks taking place in Vienna under European Union stewardship, but those negotiations have failed to budge over the last month.

In his address, Raisi stressed his embrace of diplomacy to lift US sanctions and mend rifts with neighbors, a subtle reference to Sunni rival Saudi Arabia.

“The sanctions must be lifted,” he said during his half-hour inauguration speech. “We will support any diplomatic plan that supports this goal.” 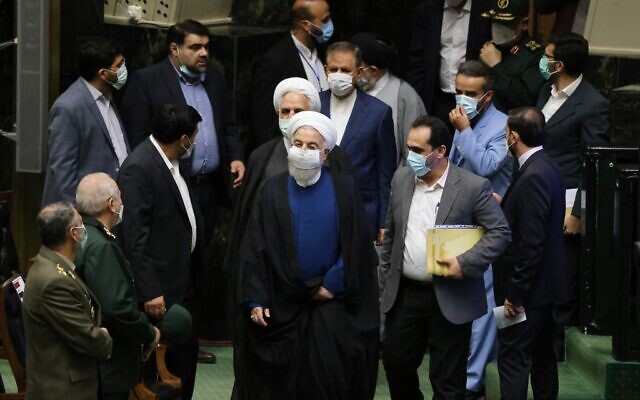 Iran’s outgoing president, Hassan Rouhani, center, arrives at the swearing in ceremony for Iran’s new president at the parliament in the Islamic republic’s capital Tehran, on August 5, 2021. (Atta Kenare/AFP)

But he also signaled that Iran seek to expand its power as a counterbalance to foes across the region.

“Wherever there is oppression and crime in the world, in the heart of Europe, in the US, Africa, Yemen, Syria, Palestine…,” he said, his voice rising with emotion, “the message of the election was resistance against arrogant powers.”

“We are the true defenders of human rights, and we do not accept silence against oppression and crime and the violation of the rights of innocent and defenseless human beings,” added Raisi, who has been accused of helping order the execution of some 5,000 prisoners in 1988, at the end of the Iran-Iraq War.

During the speech, Raisi cited Supreme Leader Ayatollah Ali Khamenei’s 2003 religious edict against pursuing nuclear weapons, saying that “such weapons have no place in the defense strategy of the Islamic Republic.”

Iranian officials often cite the fatwa as proof that the country’s nuclear ambitions are peaceful, but some analysts have questioned whether the ruling actually guides policy. In February, Iranian Intelligence Minister Mahmoud Alavi said Iran could discard the ruling and pursue nuclear weapons if pushed into a corner.

Wearing the traditional black turban that identifies him in the Shiite tradition as a direct descendant of Islam’s Prophet Muhammad, Raisi recited the oath of office with his right hand on the Quran.

“I will dedicate myself to the service of the people, the honor of the country, the propagation of religion and morality, and the support of truth and justice,” Raisi said.

Thursday’s inauguration ceremony, scaled back because of the coronavirus pandemic ravaging the country, still drew leaders and dignitaries from around the world, including Hamas terror group chief Ismail Haniyeh and Naim Qassem, second in command of the Lebanese terror group Hezbollah, an Iranian proxy. 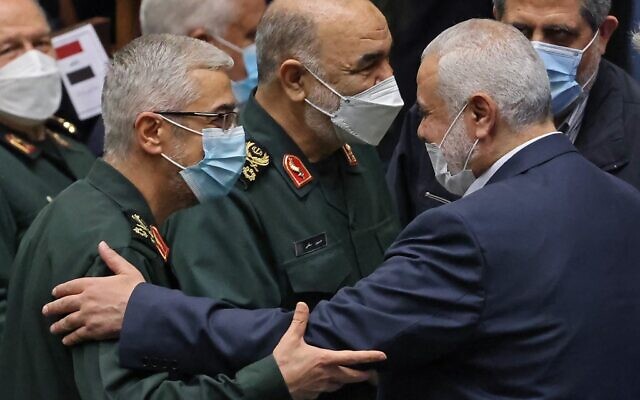 The leader of the Palestinian Hamas movement, Ismail Haniyeh (second right), shakes hands with Iranian Chief of Staff for the Armed Forces Mohammad Bagheri, left, and the commander of Iran’s Revolutionary Guard force, General Hossein Salami, during the swearing in ceremony for Iran’s new president at the parliament in the Islamic republic’s capital Tehran, on August 5, 2021.(Atta Kenare/AFP)

The two were seen in photos seated near Enrique Mora, the EU official who has coordinated the recent nuclear negotiations in Vienna.

Israel on Monday condemned Mora’s planned participation as a display of “poor judgment.”

“Flattery and subservience to violent totalitarian regimes only invites more violence and aggression,” the Foreign Ministry said in a statement.

Khamenei, in an endorsement ceremony for Raisi on Tuesday, advised him to “empower the country’s poor people and improve the national currency” during his presidency. 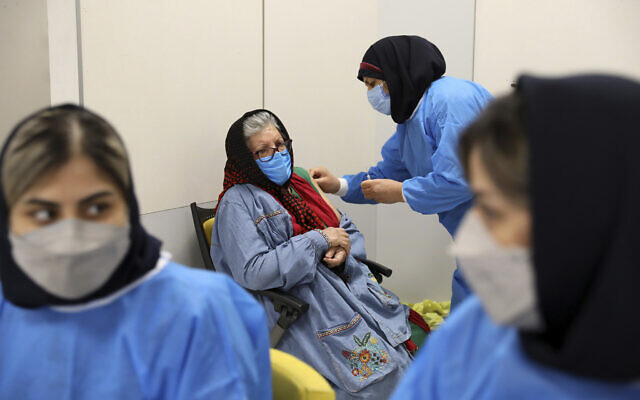 A woman receives the Sinopharm COVID-19 vaccine at the Iran Mall shopping center in Tehran, Iran, on Monday, May 17, 2021. (AP/Ebrahim Noroozi)

Barred from selling its oil abroad, Iran has seen its economy crumble and its currency crash, hitting ordinary citizens hardest. Iran is also battling the Middle East’s deadliest outbreak of the COVID-19 pandemic, with more than four million cases and upwards of 92,000 deaths.

Raisi, 60, a conservative cleric long cultivated by the supreme leader, has promised to end US sanctions on Iran. But he also has struck a hardline stance, ruling out negotiations aimed at limiting Iranian missile development and support for regional militias — something the Biden administration wants to address.

The official proceedings in Tehran come just a week after a drone crashed into an oil tanker linked to an Israeli billionaire off the coast of Oman, killing two crew members. The US, Israel and the United Kingdom blamed Iran for the raid and vowed a collective response. 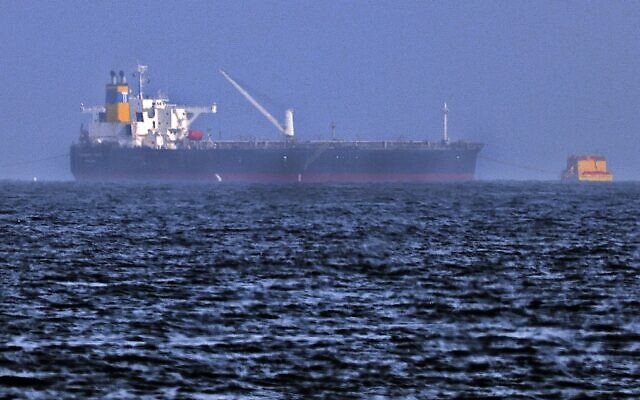 Tug boats are moored next to the Israeli-managed tanker MT Mercer Street, off the Fujayrah port in the United Arab Emirates, on August 3, 2021. (Karim Sahib/AFP)

Although Tehran denied involvement in the maritime attack, the assault escalates a years-long shadow war targeting commercial shipping in the Mideast and threatens to complicate efforts to revive the nuclear deal.