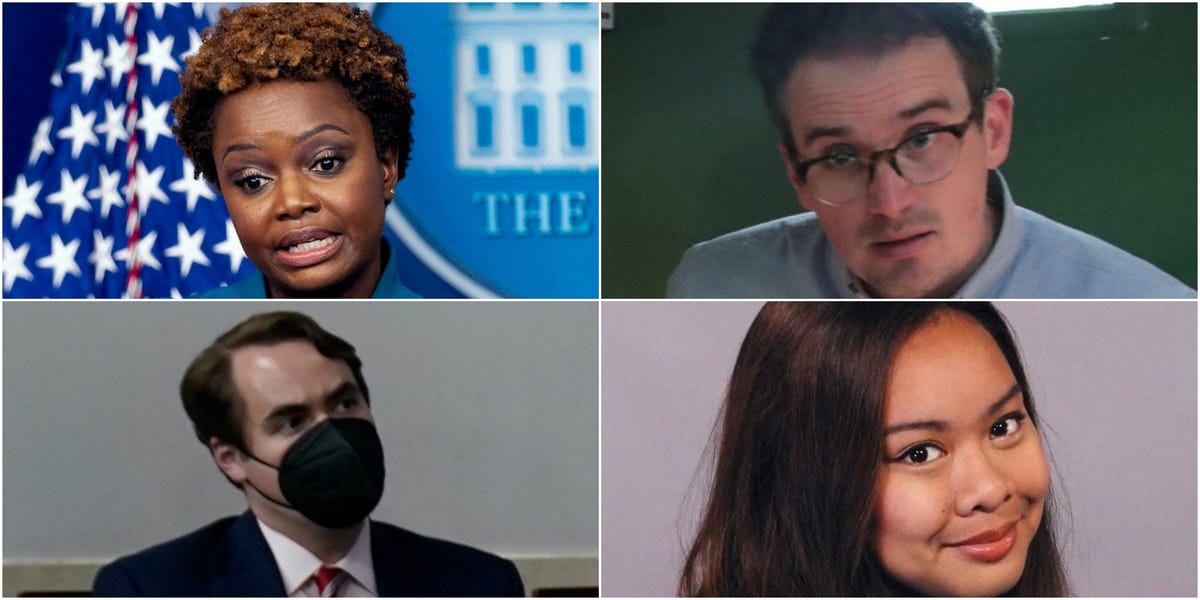 Watch closely when the White House press secretary, Jen Psaki, walks to the briefing podium every day. You’ll see the same lineup of staffers trailing behind her.

First comes Karine Jean-Pierre, the principal deputy press secretary, followed by the deputy press secretaries Andrew Bates and Chris Meagher. They sit quietly on the sidelines while reporters pepper Psaki with questions. Psaki occasionally fires back with retorts known as “Psaki bombs” to questions she dislikes.

Then there’s the small army of largely behind-the-scenes press staffers tasked with keeping President Joe Biden’s administration on message in a White House that prides itself on discipline when it comes to media relations. It fights to keep Biden-administration staffers out of the news, with Psaki recently chiding that reporters who find the Biden administration boring should “cover scandals in Hollywood” instead.

This approach has garnered Psaki legions of liberal fans who were thrilled to see the Biden administration supplant the comparatively chaotic Trump team in the White House. Her presence on the briefing podium every day offers them a comforting reminder that former President Donald Trump is no longer leading the country.

Psaki oversees 11 press staffers. They include millennial Democratic operatives and Gen Z aides who are new to the White House. Their pay ranges from $62,500 to $180,000 a year, recently released salary data indicated.

Each morning, the team gathers for meetings in Psaki’s office — Wednesdays are bagel days — and they huddle for follow-up meetings later in the day as needed.

They respond to a barrage of incoming press queries, pitch stories to reporters, prepare for press briefings, and connect senior administration officials with journalists for interviews, a person familiar with the press office said.

Some press staffers have offices, but others work side by side in a room just behind the media briefing room, where reporters can walk in at any time with questions.

Psaki is the face of the operation, but her team is the “arms and legs of the press office,” said Eric Schultz, who served as the principal deputy press secretary in President Barack Obama’s White House.

“They are sort of on the front lines of working with reporters and either knowing what’s on the minds of the reporters, knowing what they’re working on, and also knowing how the White House message is landing and being consumed,” Schultz added. “They have some of the best jobs in Washington right now.”

One of them, Jean-Pierre, is even a rumored contender to be the next White House press secretary after Psaki’s expected departure sometime next year. Jean-Pierre filled in for Psaki on the podium last week.