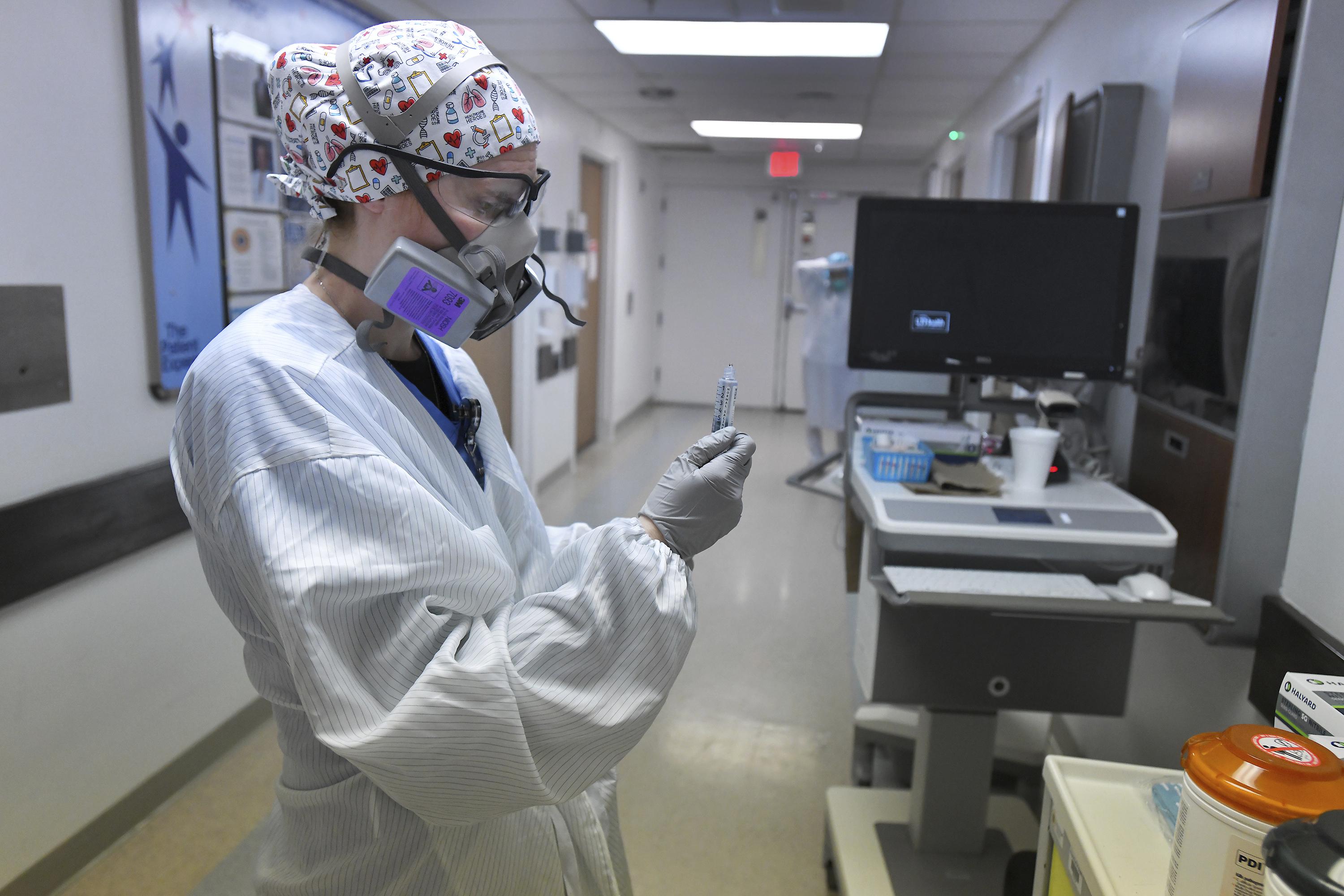 SEATTLE – Amazon has pushed back its return-to-office date for tech and corporate workers until January as COVID-19 cases surge nationally due to the more contagious delta variant.

Unlike its Seattle-area rival Microsoft and other tech giants, Amazon will not mandate employees receive the COVID-19 vaccine before they return to the office. Instead, the company said Thursday that unvaccinated employees will be required to wear masks in the office.

The surge of the delta variant of the coronavirus has upended many companies’ plans to bring office workers back this fall, a drive already complicated by efforts to accommodate widespread employee preference for flexible remote work policies, and debates over how to handle vaccine and masking policies.

Other companies that have postponed reopening plans include Microsoft, Google, Twitter and Lyft.

— US plans to require COVID-19 shots for international travelers

Mayor Brandon Scott said indoor masking regulations will take effect Monday morning, giving businesses and citizens a few days to adjust. The indoor mask rules are mandated for everyone, regardless of vaccination status.

The city’s health order came as the percentage of new COVID-19 cases has increased a whopping 374% over the past month, according to city Health Commissioner Letitia Dzirasa.

As is the case across the nation, the delta variant is driving those infections. The announcement about a return to mandatory masking was met with resignation by some.

At a clothing shop across from the city’s Inner Harbor, Luis Medina said he understood the reasoning by city leaders but couldn’t understand how they expected to enforce it.

OKLAHOMA CITY — The number of hospitalizations due to the coronavirus in Oklahoma on Thursday topped 900 for the first time since February, which a University of Oklahoma doctor said is his biggest concern due to a lack of nurses.

There were 954 hospitalizations, according to the Oklahoma State Department of Health, 274 in intensive care.

“Back in January, February, we handled the capacity with the big numbers of cases. We can’t do it now because we don’t have enough nurses and personnel to take care of all of those patients,” according to OU Health Dr. Dale Bratzler.

The physicians dialed up pressure on the Republican governor Thursday as coronavirus cases rise and a growing number of school districts are requiring staff and students to wear masks.

The doctors say in a letter to the governor that highly contagious delta variant of COVID-19 “has changed the fight.” They say scientists don’t yet know the long-term effects of the coronavirus on developing brains.

The Legislature this year blocked schools from requiring masks, but at least six districts have done so anyway noting the law doesn’t take effect until the end of September.

A spokesman for Ducey, C.J. Karamargin, did not immediately respond to a request for comment.

WEST DES MOINES, Iowa — One of Iowa’s largest health care provides has announced it will require its more than 33,000 employees to be vaccinated against COVID-19 — or find a new job.

System CEO and president Clay Holderman says the vaccination requirement is meant to protect the system’s employees and patients. The requirement applies to all employees, regardless of whether they provide direct patient care.

UnityPoint employees must be fully vaccinated by Nov. 1. Those who refuse must resign or be fired.

Employees can request an exemption for medical or religious reasons, and pregnant employees — while strongly encouraged to get vaccinated — can request a temporary deferral.

TOPEKA, Kan. — Kansas’ most populous county on Thursday imposed a mask mandate for students and staff in elementary schools in hopes of checking the more contagious COVID-19 delta variant.

The Johnson County Commission voted 5-2 for a mask requirement for schools from kindergarten through the sixth grade. The commission faced criticism both from health care providers who urged members to go further and from parents and other residents who opposed a mask mandate.

Johnson County, in the Kansas City area, has six public school districts with about 96,000 students or 20% of the state’s total. The mandate would affect roughly 50,000 students

The most recent round of funding announced Thursday is the third and last delivering the $382 million allocated to Montana schools through the federal American Rescue Plan.

Montana’s Office of Public Instruction will allocate funds to school districts to identify and help students whose learning was affected by the pandemic. It will also support student enrichment programs and mental health resources.

The funding comes on top of $32 million given to schools for coronavirus testing.

Florida Gov. Ron DeSantis held a news conference at Tampa General Hospital to promote the use of monoclonal antibodies to treat COVID-19 infections.

“I had hoped that the vaccine would just completely shut off any chance of infection and then you’d have big herd immunity and that obviously isn’t happening,” DeSantis said.

DeSantis said that he expected cases would rise during the summer.

“I don’t know that we thought we would necessarily see this many positive tests and some of the hospital admissions,” DeSantis said, adding that 91% of seniors and 80% of people over 50 have received at least their first shot. “The name of the game is if you’re infected, we just want you to be OK.”

Asked by a reporter about masks in schools, DeSantis repeated his stance that the decision should be made by parents, not school districts.

“What are the harmful effects of putting a kindergartener in a mask for seven hours? Have they talked about the emotional, the academic, the physiological? Why isn’t CDC studying that?” DeSantis said. “To act like somehow that this is just something that we shouldn’t worry about, I don’t think is acceptable.”

MILAN — Italy will require a vaccination pass on long-distance transportation, including high-speed trains and ferries between regions, from Sept. 1.

Under the new restrictions, access will be granted to anyone with at least one dose of vaccine in the last nine months, who has recovered from COVID-19 in the last six months or tested negative in the previous 48 hours.

Ministers also said that school would resume in September with all students present in classrooms, after a year and a half of at least part-time distance learning. All students over age six will have to wear masks and maintain a distance of one-meter (three feet) between students.

Italy is not making the vaccine mandatory for students or school personnel. But the education minister, Patrizio Bianchi, said any teacher who is not vaccinated and misses more than five days of school will no longer be paid and students who have been vaccinated will have their quarantine reduced from ten days to seven days in case of exposure to someone who is positive.

MIAMI — The Centers for Disease Control and Prevention said there were more than 20,100 new COVID-19 cases in the state of Florida, raising the 7-day average to an all-time high of 18,120.

The number of patients hospitalized with coronavirus rose from 12,041 to 12,516 from Wednesday to Thursday, according to the U.S. Department of Health and Human Services.

More than 2,500 of those patients with COVID-19 required intensive care, using about 40% of the ICU beds in the state, compared to less than 20% they were using two weeks ago.

RIO RANCHO, N.M. — The head of a national teachers union is visiting New Mexico on Thursday as part of a nationwide campaign to convince parents that it’s safe to send their kids back to public school.

The effort comes as more parents voice concerns over mask mandates, saying they aren’t being given a choice as school boards adopt state and federal guidance on the matter.

The school board that oversees New Mexico’s largest district ended its meeting early Wednesday amid parents protesting, and members of a rural school board in eastern New Mexico were suspended by state officials for deciding that masks would be optional this school year.

American Federation of Teacher President Randi Weingarten has said she believes masks are among the precautions that school districts can take to ensure students can safely return to in-person learning.

Weingarten had been criticized in recent weeks after some said she wavered on school reopenings following the reversal of federal officials on mask-wearing rules for vaccinated people.

Weingarten’s trip to New Mexico is part of the union’s campaign to support vaccination clinics and encourage parents through billboards, advertisements, town halls and door-to-door visits that schools are safe. The work is funded by $5 million in grants.

RICHMOND, Va. — Most of Virginia’s state workers will have to be vaccinated or agree to regular COVID-19 testing under a new requirement announced by Gov. Ralph Northam.

The governor’s office said in a news release Thursday that the order will take effect on Sept. 1 and will apply to more than 120,000 executive branch employees. It comes amid a national surge in COVID-19 cases driven by the delta variant. Most cases involve the unvaccinated.

President Joe Biden and a growing number of state and local governments and major employers are taking an increasingly hard line against vaccine holdouts.

FORT LAUDERDALE, Fla. — Coronavirus hospitalizations are once again surging as the more potent delta variant cuts across the country.

The number of people in the hospital in the U.S. has more than tripled over the past month, from an average of roughly 12,000 to almost 43,000, according to the Centers for Disease Control and Prevention. The variant has sent cases surging to 94,000 a day on average, a level not seen since mid-February.

Florida, Georgia and Louisiana account for nearly 40% of all hospitalizations in the country. Louisiana and Georgia have some of the lowest vaccination rates, with 38% of their populations fully inoculated. Florida is closer to the national rate, at 49%. Most New England states are well over 60%.

PARIS — A French constitutional court has validated most aspects of a new law that requires people carry a COVID-19 health pass to access cafes, restaurants and long-distance travel.

But it struck down several measures for not meeting constitutional muster. The Constitutional Council ruled Thursday the automatic 10-day isolation of people infected with the virus goes against French freedoms.

It approved obliging health care workers to be vaccinated against the virus by Sept. 15

The health pass has ardent opponents, with many claiming their freedoms are compromised. The pass is issued to the vaccinated or people who have proof of recent recovery from the coronavirus or a recent negative test.

Starting Monday, it will be required for using long-distance travel by train, plane or bus, entering restaurants, cafes and their terraces and rest homes, among a long list laid out in the law and approved in the ruling.

Rep. Debbie Wasserman Schultz says Florida, which has accounted for about 20% of the nation’s new cases in the last three weeks, has become “one of the most dangerous and least prepared places to be in America.”

Florida had 12,500 COVID patients hospitalized Thursday, according to the CDC, nearly seven times the state’s figure in mid-June. It is reporting 17,000 new cases per day, 10 times more than two months ago. Those are records, eclipsing numbers posted last summer before vaccinations were available.

Wasserman Schultz criticized DeSantis for threatening to withhold millions in state funding from school districts that require students to wear masks in the upcoming school year.

“That is not leadership, that is dereliction of his duty to protect people and the kind of big government overreach and obstruction of local control that conservatives should be outraged over,” she said.

DeSantis has argued children rarely become ill from the coronavirus and wearing masks interferes with their learning and breathing. He has said mask wearing should be left up to individuals and the spike in cases is seasonal.