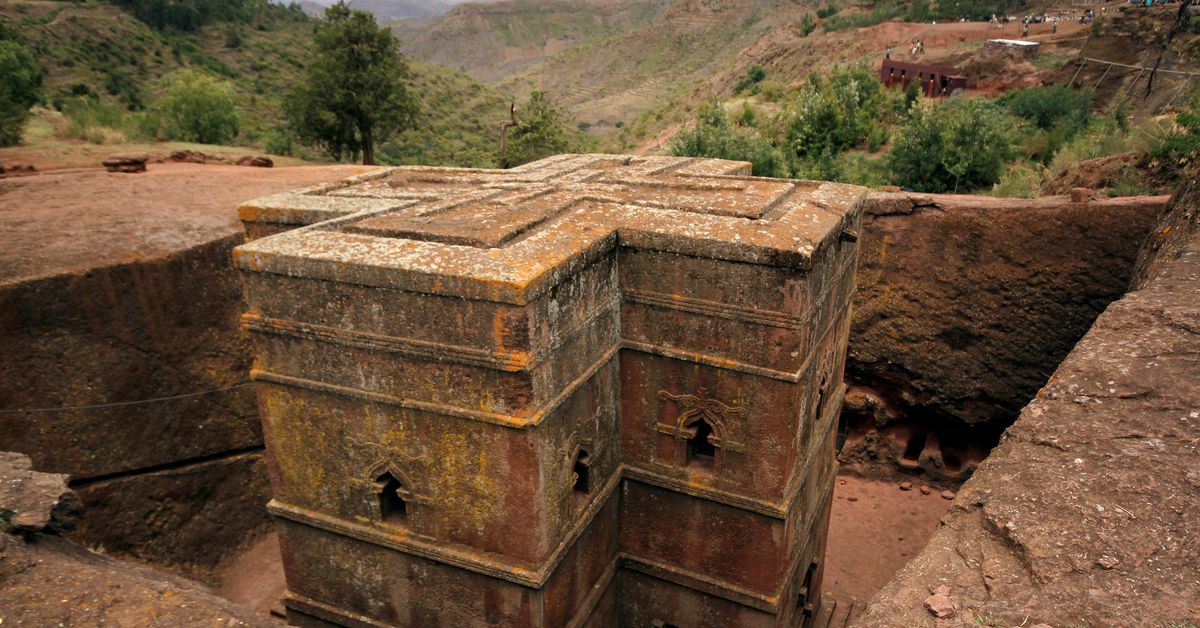 Bet Medhane Alem rock church is seen in Lalibela April 23, 2011. According to legend, angels helped King Lalibela build this church and others like it in the 11th and 12th century after he received an order from God to create a new Jerusalem in Ethiopia. Picture taken April 23, 2011. REUTERS/Flora Bagenal/File Photo

Lalibela, also a holy site for millions of Ethiopian Orthodox Christians, is in the North Wollo Zone of the Amhara region in Ethiopia’s north. In recent weeks fighting has spread from Tigray into two neighbouring regions, Amhara and Afar, forcing around 250,000 people to flee.

Senior officials from the United Nations and the United States government who visited Ethiopia this week raised alarm at the widening of the war in Tigray to other parts of northern Ethiopia. read more

Seyfu, a resident of Lalibela who spoke to Reuters by phone, said he saw hundreds of armed men speaking Tigrinya, the language of ethnic Tigrayans, walking through the town on Thursday. He said they were not speaking Amharic, the language of the people of Lalibela, and were wearing “different uniforms” from those of the federal military.

Seyfu said forces from the Amhara region, which are allied to Ethiopia’s central government, fled on Wednesday night together with local officials.

“We asked them to stay, or at least give us their Kalashnikovs, but they refused and fled taking five ambulances, several trucks and cars. They shot dead a friend of mine while they fled, he was begging them to stay to protect civilians,” he said.

A second man, Dawit, told Reuters by phone he left Lalibela on Thursday morning as Tigrayan forces were arriving. “We had to walk with on foot, around 200 of us left.”

Reuters could not independently verify the eyewitnesses’ information. Spokespeople for the prime minister, the Ethiopian military and a government task force on Tigray did not immediately respond to requests for comment. A spokesperson for the Tigrayan forces could also not be reached for comment.

Daniel, a third resident of Lalibela, told Reuters by phone that he saw hundreds of soldiers entering the town around noon. He said he fled to the mountains outside the holy city and that only women and children had been left in the town.

He said that there was no fighting in Lalibela when the Tigrayan forces entered.

The United States on Thursday called on Tigrayan forces to respect the cultural heritage of the town, as Washington’s grows increasingly alarmed over the widening of the conflict.

Lalibela is a major tourist destination in Africa’s second-most populous nation. Visitor numbers plunged after war broke out in November in Tigray between the federal army and forces belonging to the Tigray People’s Liberation Forces (TPLF). read more

The government declared victory at the end of that month, after seizing the regional capital Mekelle. But the TPLF kept fighting and at the end of June retook Mekelle and most of Tigray after government soldiers withdrew.

Tens of thousands of visitors from around Ethiopia and abroad usually come to Lalibela on the Orthodox Easter weekend, home to a UNESCO World Heritage site of 12th and 13th century monolithic churches, to celebrate and witness the most important holiday in the Orthodox calendar.