Washington is still attempting to gauge the scope of United States weaponry and technology that have fallen into the hands of the Taliban following Afghanistan’s fall to the militants, though it is believed to be considerable.

Materiel the Islamist group is believed to have gained includes hundreds of thousands of assault rifles, thousands of armored vehicles, dozens of aircraft, tanks, artillery, sniper rifles, night-vision goggles and much more.

Some analysts believe the capture of such vast amounts of sophisticated firepower, while representing a loss of billions of dollars in funds and embarrassing to the US, is mostly a public relations coup for the Taliban. A lack of expertise and resources will prevent the group from using the most advanced weaponry in any effective manner, they argue.

Matthew Henman, a defense analyst who is head of terrorism and insurgency research at Janes, told The Wall Street Journal: “These seizures have more propaganda value for the Taliban than any real leveling-up of capabilities.”

Others note that guns and armored cars will significantly boost the group’s ability to potentially terrorize civilians. And much of the equipment that is not useful to the militants could end up being sold to American enemies who could make good use of it.

A congressional source with knowledge of the discussions on the matter spoke to CNN Saturday of concern “that some [weapons] may end up in the hands of others who support the Taliban’s cause.”

“My biggest fear is that the sophisticated weaponry will be sold to our adversaries and other non-state actors who intend to use it against us and our allies.”

Pentagon spokesman John Kirby said on Wednesday that the department is looking at the issue.

“We obviously don’t want to see our equipment in the hands of those who would act against our interests, or the interests of the Afghan people,” Kirby told reporters.

“There are numerous policy choices that can be made, up to and including destruction,” he said, without giving specifics.

Weapons of US army seized by Taliban pic.twitter.com/s62MSGlW18

US National Security Adviser Jake Sullivan said that US officials “don’t have a complete picture, obviously, of where every article of defense materials has gone, but certainly a fair amount of it has fallen into the hands of the Taliban.”

In a letter to US Defense Secretary Lloyd Austin this week, 25 Republican senators demanded accountability for the loss of arms.

“It is unconscionable that high-tech military equipment paid for by US taxpayers has fallen into the hands of the Taliban and their terrorist allies,” they said. “Securing US assets should have been among the top priorities for the US Department of Defense prior to announcing the withdrawal from Afghanistan.” 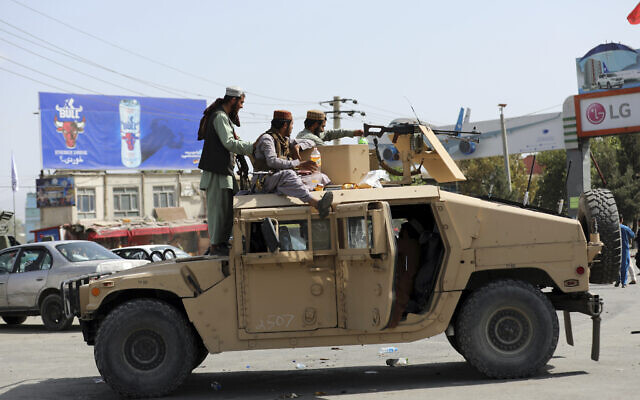 According to official figures, the US military supplied the Afghan army with more than 7,000 machine guns, 4,700 Humvees and 20,000 grenades in recent years.

The Afghans have also received artillery and reconnaissance drones from Washington, as well as more than 200 aircraft, both fixed-wing and helicopters.

Their continued operation depended heavily on US technical support and parts, however.

According to photographs published on Wednesday by Janes, the defense specialists, some 40 Afghan military aircraft were flown into Uzbekistan over the past week to escape the Taliban advance, including five UH-60 Black Hawk and 16 Russia Mi-17 helicopters and 10 A-29 Super Tucano attack airplanes.

In its 16-month drawdown, the Pentagon removed huge amounts of its own equipment from Afghanistan, and handed some of it to the Afghan army.

But hardware supplied to the Afghan forces that is now in Taliban hands has raised concerns.

Pentagon spokesman John Kirby said on Wednesday that the department is looking at the issue.

The captured arms and vehicles only expand the Taliban’s powers in limited ways, experts say.

“The most dangerous weapons the Taliban have captured are the D-30 howitzers and Afghan Air Force assets,” said Jonathan Schroden, director of the Countering Threats and Challenges Program at CNA, a Washington security consultancy.

#Afghanistan Updates
After weeks of fierce clashes & hundreds of casualties, #LashkarGah city was handed over to #Taliban last night. Taliban in exchange gave safe to all pro-Govt forces to retreat towards Camp Shorbak
Two D-30 Howitzers were also seized by the Talibans pic.twitter.com/dB5HgjzNwr

Even then, it makes them at best a limited direct threat to better-armed neighbors.

On the other hand, the massive amounts of small arms and munitions they inherited, said Schroden, could “conceivably find their way to many different parts of the globe and to a variety of other terrorist groups.”

“Probably the best thing the US can do at this point is to work with Afghanistan’s neighbors to try and interdict the transport of any of this equipment across the country’s borders,” he said.

Sorgente articolo:
As Taliban parades captured weapons, US still trying to gauge scope of damage – The Times of Israel