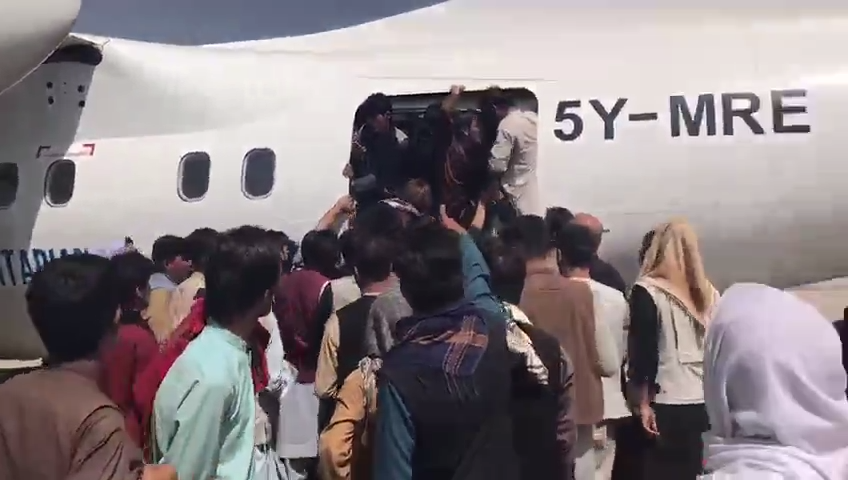 Crowds in Afghanistan gets on airplane as Taliban returns to Kabul

Omid Mahmoodi, an Afghan man who worked with the military, captured footage of people boarding an airplane as the Taliban returned to Afghanistan.

Defense Secretary Lloyd Austin ordered the emergency use of 18 U.S. commercial aircraft Sunday to transport Afghan evacuees after they’re flown out of Kabul.

The U.S. continues to evacuate Americans and Afghan people with special immigrant visas. Seventeen thousand people have been taken out of Afghanistan in the past week.

The Defense Department is acting under Stage I of the Civil Reserve Air Fleet (CRAF) and confirmed the commercial aircraft wouldn’t be flying in and out of Kabul. Officials told The Wall Street Journal the planes will move evacuees “from bases in Germany, Qatar and Bahrain to ease overcrowding pressure and transport bottlenecks.”

►Latest from Afghanistan: 7 die at Kabul airport, US airlines activated to help evacuation

►’We’re not out of the woods yet’: Southwest admits struggles will continue as employee gripes grow

“As a global airline and flag carrier for our country, we embrace the responsibility to quickly respond to international challenges like these and use our expertise to ensure the safe passage of our fellow countrymen and women as well as those who have risked their lives to help keep them safe,” United Airlines’ statement read.

“The images from Afghanistan are heartbreaking. The airline is proud and grateful (to) our pilots and flight attendants, who will be operating these trips to be a part of this life-saving effort,” American Airline’s statement read.

CRAF is part of the National Emergency Preparedness Program and was designed to help the Defense Department’s airlift capability.

“For decades, Delta has actively played a role in supporting the U.S. Military and our troops,” said John Laughter, Delta EVP and Chief of Operations, in a media statement. “And we are again proud to pledge Delta people and our aircraft in support our country’s relief efforts.”

According to the Defense Department, this is the third CRAF activation in the history of the program. The first being in support of Operations Desert Shield/Storm from August 1990 to May 1991, and the second for Operation Iraqi Freedom from February 2002 to June 2003.