For the second consecutive day on Monday, the government commission investigating a deadly accident at a Jewish pilgrimage site in April heard testimony from officials involved in the oversight of Mount Meron in Israel’s north.

Rabbi Shmuel Rabinovitch, the rabbi of the Western Wall and Holy Sites, told the three-member panel that he didn’t know the narrow passageway that was the site of the crush was dangerous. “We didn’t know there was a problem,” he said on Monday. “They didn’t tell us there was an issue with the ‘Dov Bridge.’ Nobody brought it up to us.”

Rabinovitch spoke to the panel, headed by former Supreme Court justice Miriam Naor, almost four months after the crush at Mount Meron left 45 people dead. The April 29 incident at a Jewish festival in northern Israel was the deadliest civilian disaster in the country’s history. Around 100,000 worshipers, mostly ultra-Orthodox Jews, attended festivities despite longstanding warnings about the safety of the site and the dangers of overcrowding.

Rabinovitch served as the head of the Committee of Five charged with overseeing the Mount Meron site, which draws enormous crowds each year on Lag B’Omer of those seeking to visit the grave of second-century sage Rabbi Shimon Bar Yochai. Rabinovitch repeatedly claimed that the committee was not involved with the planning of events at the site on Lag B’Omer, and did not have the authority to intervene. “If the state had told me that I was responsible for the events of Lag B’Omer, I would have immediately resigned,” he said on Monday.

He also told the panel that when the committee was established in 2008, the site was in much worse shape. “The situation there in 2008 was awful — there was no infrastructure, there was illegal building, electric cables everywhere, and every brick we tried to move set off a war,” he told the three-member panel, which is holding hearings in the Malha neighborhood of Jerusalem.

“I decided that I couldn’t give in [to demands] because the place was so dangerous. And for three years there were major changes,” Rabinovitch added, saying that the situation now is vastly improved over 2008. “Then, any child could touch an electric cable and get electrocuted.” 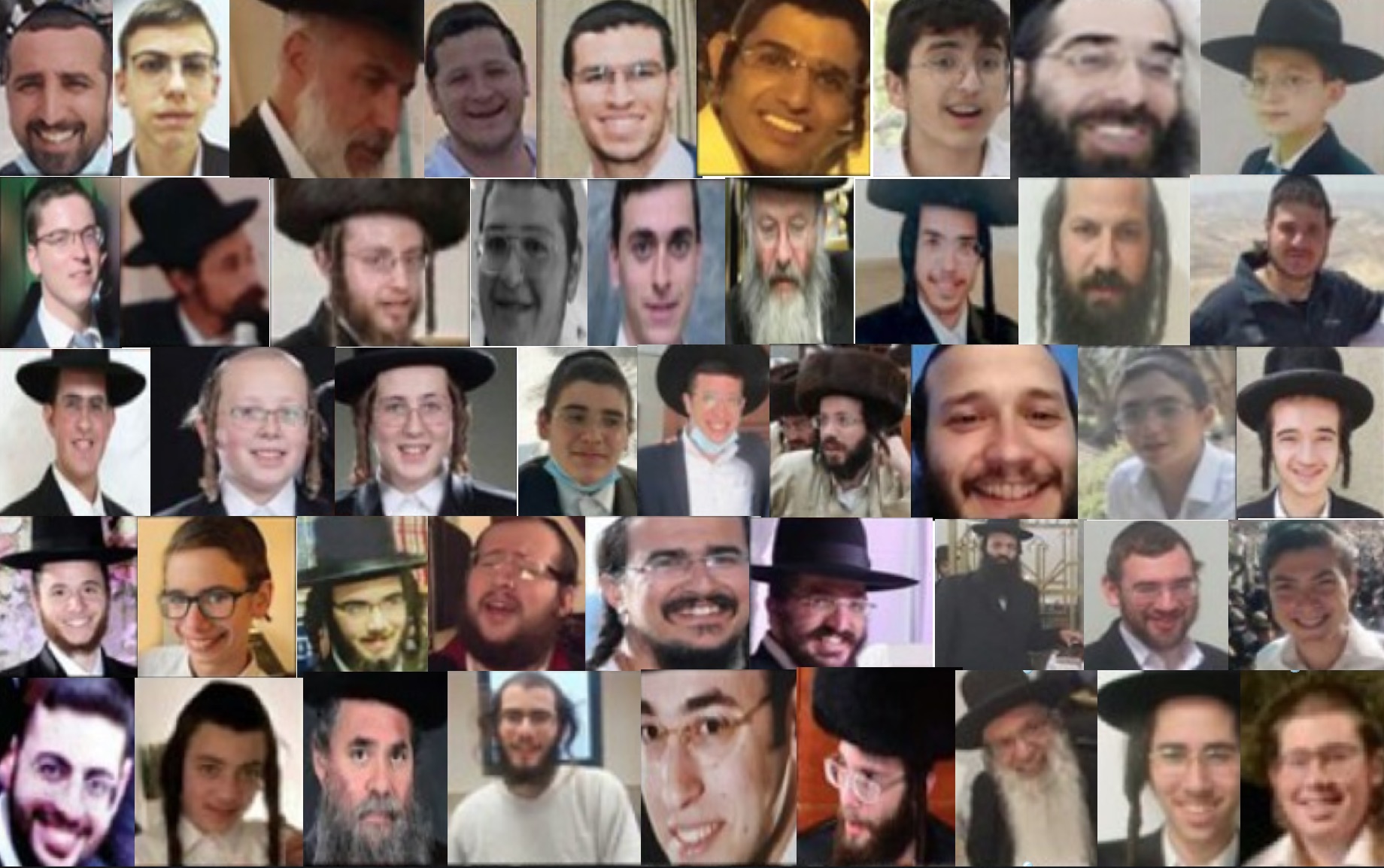 Naor pressed Rabinovitch to answer questions about the narrow passageway where the tragedy unfurled, as hundreds of people pressed their way to the exit and, as some began to slip and fall, leading to the deaths of 45 men and children.

“We didn’t know there was a problem. The security advisers we consulted in 2008 and after that didn’t bring up any problems with the Dov Bridge, they didn’t mention it,” said Rabinovitch on Monday. He claimed that it was possible there were no issues with the bridge throughout the majority of the year, and said that on Lag B’Omer, “I don’t really spend much time at the site.”

Rabinovitch reiterated that he had never heard of any concerns with the specific passageway, “but I thought that the entire area looks like the third world. We asked to plan and build everything from scratch,” he added. “We started work on a plan that was supposed to renovate the entire area. I didn’t know there were any problems with that bridge. Nobody brought it to my attention.”

The members of the panel further pressed the rabbi about the specific area of the Meron site where the tragedy occurred, where the Toldot Aharon sect lights a bonfire each year. Rabinovitch claimed that the lighting occurs each year without any particular oversight or approval. “I don’t approve anything — nobody even asks us,” he said.

Rabinovitch said he believed authorities should considering canceling or moving the satellite bonfire lightings at the site. “The committee was opposed to the Toldot Aharon lighting… we told them to go to a different area, but they rejected it.” 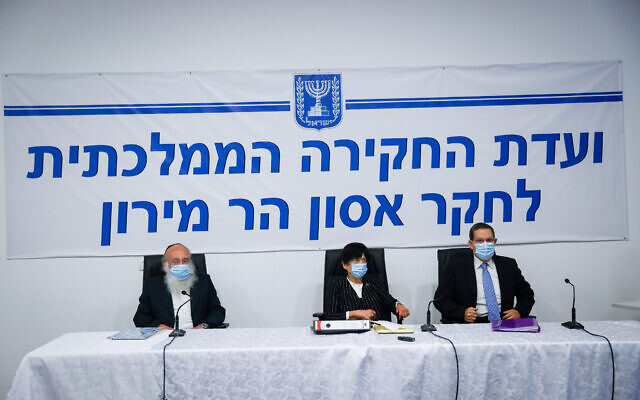 He told the panel that he welcomed the state commission of inquiry, and noted that it was unfortunate that such a tragedy had to occur to establish an investigation.

“There are many different interests at play. I am also part of the bereaved families, I lost a nephew during the incident,” said Rabinovitch. “It’s a horrible tragedy, my heart is hurting.”

The commission’s proceedings kicked off on Sunday with testimony from Northern District police chief Shimon Lavi, the officer who was in charge of managing the event.

Lavi said the Mount Meron festivities were the Israel Police’s most significant annual event, requiring extensive resources, planning and preparation. He said that out of safety concerns “there has been no limitation on attendance at Meron — that’s how it has been done for the last 30 years.”

Any attempt to limit entry and put up barricades could result in “bottlenecks and much greater disasters,” he said. 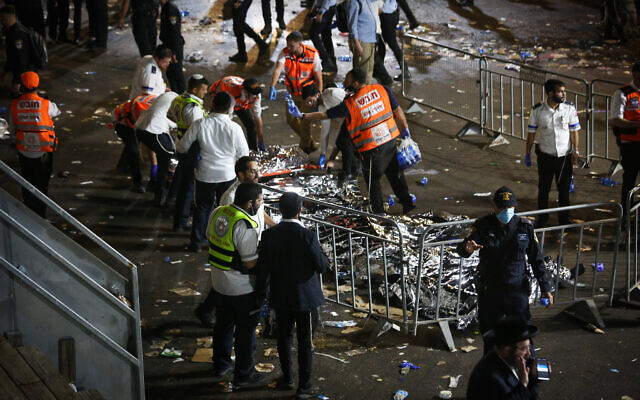 Israeli rescue forces and police at the scene of the fatal crush during Lag B’Omer celebrations on Mt. Meron, in northern Israel, on April 30, 2021. (David Cohen/Flash90)

Lavi said there had been “neglect for many years” and “a lack of understanding that the event grew over time and that the infrastructure was not adequate, but rather a kind of Band-Aid.”

The panel has been granted a budget of NIS 6 million ($1.83 million) to investigate how the disaster unfolded and probe the decision-making processes that authorized the event.

Times of Israel staff and The Associated Press contributed to this report.

Sorgente articolo:
Rabbi of holy sites tells Meron probe: I had no authority over Lag B’Omer events – The Times of Israel