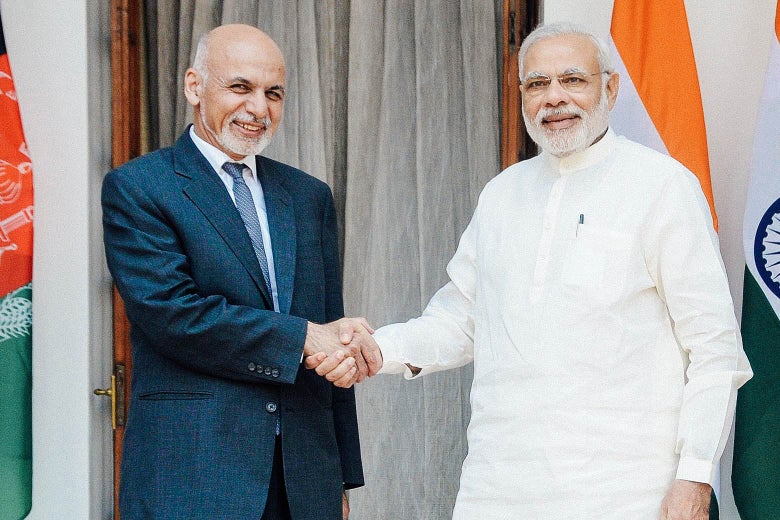 For the past few years, the main geopolitical power struggle in Asia has been the trade and military conflicts between its two largest nations, China and India. Other regional players, including Nepal and Sri Lanka, have been defined on the world stage by their relationships with one or the other country, while farther-off powers like the United States and Australia have been willing to partner with India to form an alliance against China’s authoritarian rise. But the two sides of this struggle have never been neatly defined—and that was the case even before the Taliban took back control of Afghanistan. With its return to power, the militant group stands ready to shake up the entire balance of power across Asia, just as it did the last time it held power.

To understand why, it’s worth going back a few decades, to the years just before the Soviet Union’s incursion into Afghanistan. For all the current buddy-buddy goodwill between the U.S. and India, relations between the two were much more strained during the Cold War—India remained staunchly neutral when it came to the Soviet Union vs. the U.S. This shifted in the early 1970s, when nationalist Bengali rebels in what was then East Pakistan began a revolt to create a new nation named Bangladesh, with aid from India and its Soviet-purchased weapons. Richard Nixon’s administration backed Cold War ally Pakistan’s efforts to crush the rebellion.

While that effort failed—India won the war, and Bangladesh is now 50 years old—this mess would establish which country took which side when the Soviets invaded Afghanistan in 1979. The Carter and Reagan administrations funded the Afghan mujahedeen rebels who battled the Soviets, fueling a war that displaced millions of people, many of whom fled to neighboring Pakistan. The military government in Islamabad supported the refugees and prominently stood against the Soviets; for this effort, it received formal financial aid from the U.S., Saudi Arabia, and even China, which by that point had severed relations with the Soviets. Throughout the 1980s, Pakistan served as a conduit for intelligence trading and arms sales between the anti-Soviet fighters and the U.S., and trained tens of thousands of Afghan rebels within its borders. India, meanwhile, was willing to establish relations with the Soviets’ puppet government in Kabul, in part as a matter of opposition to the fundamentalist ideologies of mujahedeen factions.

After the Soviet withdrawal from Afghanistan in 1989, many of Pakistan’s trainees would find a new cause: India and Pakistan’s fights over control of the Jammu and Kashmir region, a decadeslong land dispute dating back to independence from Britain. Some of the soldiers who fought in Afghanistan went on to form a splinter group known as Hizbul Mujahedeen, a militant political faction fighting, with the support of Pakistan’s intelligence services, to bring Jammu and Kashmir under full Pakistani control. Hizbul Mujahedeen ramped up its insurgency in Jammu and Kashmir during the early 1990s, displacing numerous Kashmiris and sparking military countermeasures from the Indian government. Other militant groups spun off from or inspired by the Afghan mujahedeen, including Al-Badr Mujahedeen and Jaish-e-Mohammed, would keep up the fight to wrest Kashmir from India, either by merging it with Pakistan or forcing its full independence. The conflict continues to this day.

By the time the Taliban, founded and led by Pakistan-trained militants and ex-mujahedeen troops, took over Afghanistan in 1996, this history would lead the group to a shaky alliance with Pakistan and, resultingly, enmity with India. The latter, which had already been fighting off mujahedeen splinter cells, was worried about how a government-powered Taliban could further work with Pakistani intelligence to bolster groups that could attack India across the Indo-Pak border; thus, the Indian government never formally recognized the Taliban’s power. Meanwhile, Pakistan and Afghanistan worked closely together, while Afghan Sikhs and Hindus, who had a long history within the country but were religious minorities, fled persecution by fundamentalist rulers. Taliban-India tensions flared up multiple times, such as when the group hijacked an Indian Airlines flight near the turn of the millennium and held the passengers hostage in exchange for three terrorists who were detained in India.

This power balance was shifted again by the 9/11 attacks, after the U.S. invaded Afghanistan to oust the Taliban and began drone strikes within Pakistan in its fight against al-Qaida and Osama bin Laden. These war on terror dynamics, which positioned the U.S. against the region’s Islamist fundamentalists, also brought its government closer to India as a strategic military, economic, and democratic power. This also helped sour the U.S. further on China, which, due to its own long-standing border conflicts with India, had remained an ally of Pakistan throughout these war-torn years (though not, notably, of the Taliban specifically). Meanwhile, India spent billions supporting the U.S.-backed Afghan government and staying close to its leaders.

Two decades after U.S. occupation commenced, we’re back to Taliban rule in Afghanistan. But it’s not the Cold War or 1996 anymore, and there are far different stakes now.

Over the years, the Afghan Taliban have softened their vitriol against India, but the subcontinent is right to still worry about their return to power. After all, there’s no reason to think a theocratic Afghanistan won’t be a safe space for jihadi groups and spinoff cells, or that it won’t encourage Pakistani radicals, or that it couldn’t reinvigorate now-limp terrorist factions that target their hostility toward India. It was only two years ago that the mujahedeen-influenced Jaish-e-Mohammed carried out a fatal bombing in Indian Kashmir, killing dozens and nearly reengaging India and Pakistan in war; Taliban support could further empower such groups and further ignite the Kashmir crisis.

As for Pakistan, it now has an uneasy friend in Taliban-run Afghanistan. While Pakistani intelligence could work with Taliban militants for mutual benefit, the country’s government has a lot to worry about: Afghan refugees emigrating to their neighboring country, as well as a resurgence of even more extreme Taliban splinter groups that seek to take over the Pakistani government.

Nevertheless, these concerns could potentially be superseded by the fact that both Afghanistan and Pakistan may have a friend in China, depending on how future developments pan out. The ruling Communist Party is concerned that the Taliban could influence militants in Xinjiang—which borders both Afghanistan and Pakistan—and that the group’s mass displacement of Afghans could spur refugees to the Chinese border. However, China is still edging toward establishing relations with the new Afghan government, incentivized as it is by the potential advantages of pairing with the Taliban.

What are those advantages? Let’s start with the diplomatic: China is going to keep sparring with India over disputed territories, Himalayan and Indus River access, traded goods, cybersecurity, and cultural influence. In this case, it will help not only to stay close with Pakistan, which will forever lock horns in India over matters of land and regional dominance, but also with Pakistan’s friends. Plus, Pakistan is willing to keep its mouth shut on the genocide of China’s Uyghur Muslims and even crack down on Uyghur refugees within its borders. And maybe, ties with Afghanistan’s Islamist government will deter the Taliban from inspiring uprisings from other religious fundamentalists within China. As for the economic: Now that the Taliban own the Afghan territory, they have control over the land’s rich mineral deposits. It’s been estimated that Afghanistan has trillions of dollars’ worth of rare earth metals, including and especially lithium, that are a major component of green technology ranging from electric vehicles to solar panels. China, as a leader in climate-tech manufacturing and distribution (even while emitting carbon at alarming levels), will find this feature of an Afghan partnership advantageous.

None of this is a guarantee, of course, that the Taliban and the CCP will be staunch allies. Still, no matter how the two regimes ultimately align, one thing is for sure: Chinese enemy India has little to celebrate. The subcontinent reacted quickly throughout the past two weeks: sending transport to evacuate its citizens from Afghanistan, shuttering its consulates there, and establishing a six-month “emergency e-visa for Afghan nationals who want to come to India,” per the Tribune India (which, controversially, appears to prioritize Sikh and Hindu refugees over Muslims, in an echo of the Islamophobic 2019 Citizenship Amendment Act). It kept its embassy in Kabul running until Aug. 16, when the Taliban, in spite of their usual hostility toward India, peacefully escorted the country’s diplomats out of the embassy building to the city’s airport.

A reempowered Taliban is of concern to India’s power ambitions—and the country’s leaders know it. Foreign Minister S. Jaishankar, in conversation with U.S. Secretary of State Antony Blinken, claimed it was imperative that “Afghanistan must neither be home to terrorism nor a source of refugees,” but it’s already too late for the latter, in spite of reported promises by Taliban leaders to provide domestic Sikhs and Hindus “safety and security,” and perhaps only a matter of time for the former. Plus, considering how India has treated Rohingya refugees—as well as its domestic Muslims in general—it’s unlikely the nation will be hospitable to potential Afghan refugees who find themselves persecuted by both the Taliban and the Pakistani government. So now, India has resigned itself to working with the Taliban, opening communication with the group as it also sees ostensible friends like Russia embrace Afghanistan’s new rulers. It may all be a portent for the inevitable future of the India-China fight: The former, already outweighed in military and manufacturing strength by the latter, will steadily have to compromise more and more with other great powers as China and Pakistan find more friends in Indian neighbors, and India loses more of its own.

Sorgente articolo:
The Taliban’s Comeback Could Upend the Balance of Power Across Asia – Slate