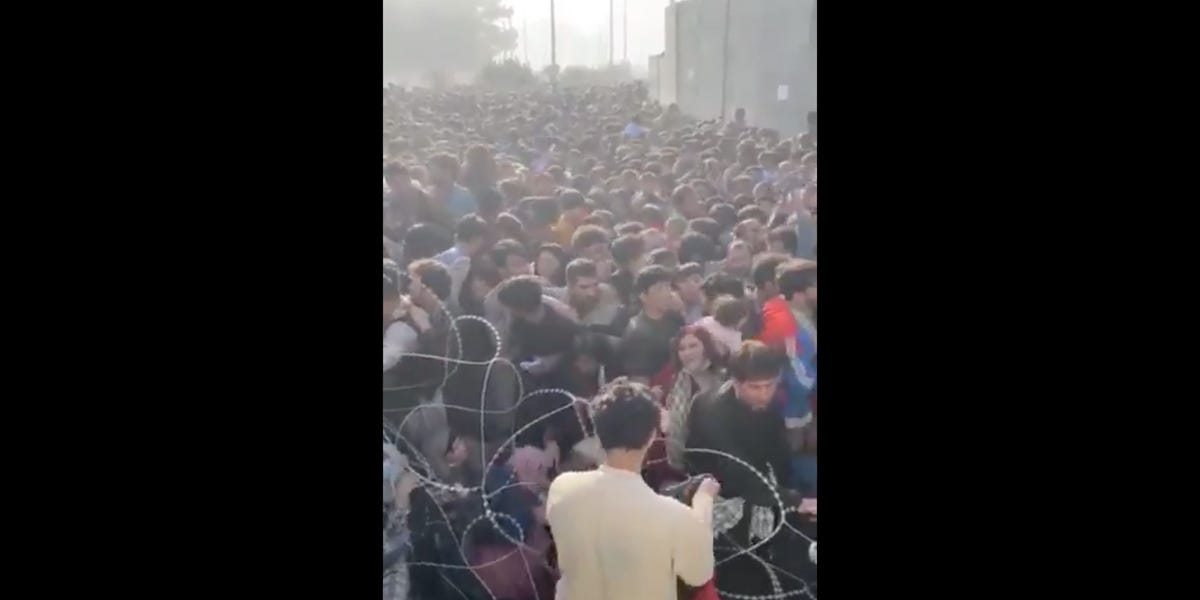 A harrowing video captures the chaos and desperation at Kabul airport on Saturday morning as thousands tried to flee following the Taliban takeover last week.

The video shows a heaving crowd of Afghans pressed up against a barbed-wire fence.

Small children and women can be seen at the front of the crowd, desperately shouting for help.

The video was posted to Twitter by Barak Ravid, a reporter for Walla News, who said he was sent the video by an NGO contact in Kabul.

“The scene at Kabul airport several hours ago per source from an NGO who is trying to get people out,” Ravid wrote.

“Main problem is that it’s impossible to pass the gates and get to the planes even if you are on an evacuees list.”

At least 15 people have been killed in and around the airport since Sunday, NATO and Taliban officials said, but those on the scene have said the death toll is likely to be much higher, The Guardian said.

Sky News’s chief correspondent Stuart Ramsay was at Kabul airport on Saturday and reported witnessing chaotic scenes and people at the front of the queue being “crushed to death.”

Ramsay described seeing paratroopers try to pull people out of the crowd while soldiers sprayed the crowd with a hose to cool them down.

Several foreign embassies have set up evacuation centers within the airport compound, and tens of thousands of Afghans have lined up outside the airport in the hopes of finding a way out.

Since the insurgent group seized control of the capitol on Sunday, many harrowing videos have emerged showing desperate scenes at Kabul airport.

One video showed an Afghan baby being passed over a barbed-wire fence at the airport, and another showed crowds of panicked Afghans desperately trying to hang on to planes.

A US service member also filmed a video capturing chaos on the tarmac of Kabul airport.

Large crowds have continued to gather at Kabul airport, where armed Taliban have reportedly urged those without travel documents to go home, according to The Telegraph.

The United States has advised citizens in Afghanistan to avoid traveling to Kabul airport right now due to “potential security threats.”

On Friday, President Joe Biden said the US would “provide safe evacuation for our Afghan allies, partners, and Afghans who might be targeted because of their association with the United States.”

However, critics say the system for US evacuees is incoherent and badly managed, with the few who managed to pass Taliban checkpoints being stuck at the airport for days, as reported by The Guardian.