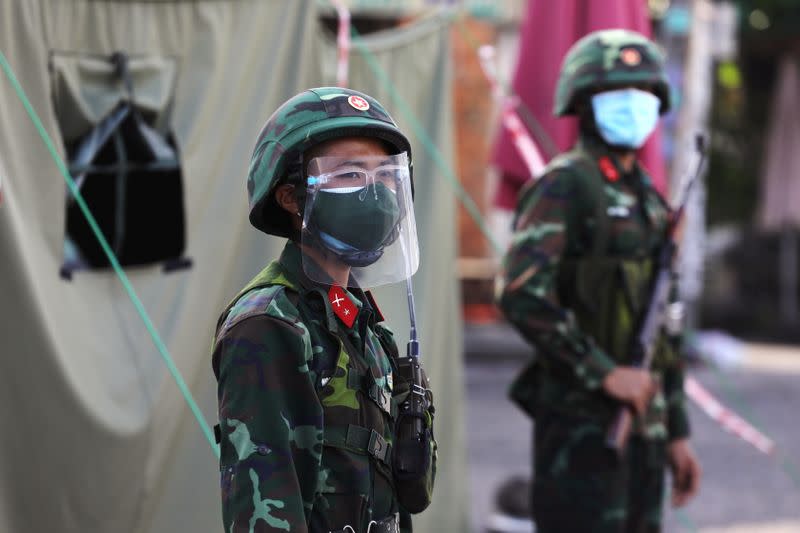 Vietnam implemented movement restrictions in Ho Chi Minh City in early July, but announced its harshest curbs last week as infections have continued to surge. Authorities have said enforcement of recent curbs has not been sufficiently strict.

After containing COVID-19 for much of last year, Vietnam has recorded 358,456 infections and at least 8,666 fatalities. Ho Chi Minh City has recorded over 180,000 infections – half the country’s total – and 7,010 deaths, making up about 80% of the nation’s fatalities, according to the health ministry.

Most of those cases have been recorded in Ho Chi Minh City and its surrounding industrial provinces, where the Delta variant of the virus has sent numbers soaring since late April.

The government said on Friday a tighter lockdown would begin on Monday, prohibiting people from leaving their homes, even for food, and said the military would step in to help.

The announcement, later amended so that people in some areas could still shop for food, was subsequently reverted to a total ban, triggering confusion and panic-buying at supermarkets in the city over the weekend.

Vietnam has over recent weeks sent 14,600 additional doctors and nurses to the city and its neighbouring provinces to support its overwhelmed medical system, the ministry said.

Patients with mild or no symptoms have been told to self isolate at home.

The government said on Friday it would send 130,000 tonnes of rice from state stockpiles to Ho Chi Minh City and 23 other cities and provinces. People in the city’s Phu Nhuan and Go Vap districts told Reuters they had received packages of rice, meat, fish and vegetables from the military.

In total, the country has secured over 23 million doses of COVID-19 vaccines but just 1.8% of its 98 million people have been fully vaccinated – one of the lowest rates in the region.