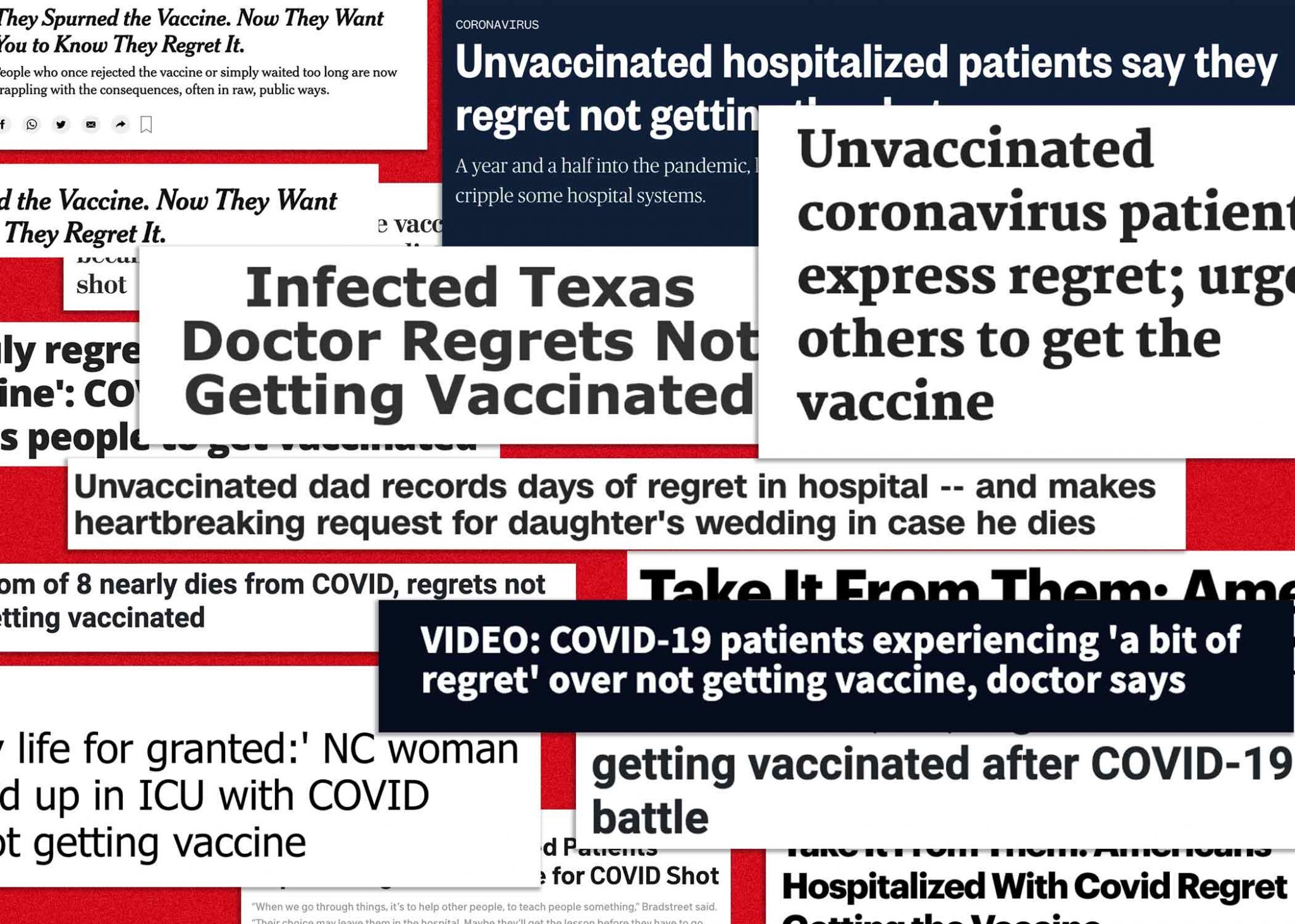 You’ve heard and read the stories.

An unvaccinated California father of nine children got COVID-19 and landed in the hospital, and while he recovers, he remains dependent on oxygen and unable to do most daily activities. Jonathan Weltsch of Humboldt County told the Times-Standard he regretted not getting inoculated.

“I was told my whole life not to take experimental drugs and I was 100% against an experimental vaccine,” Weltsch said. “I was so strong-willed against it. … Then I lost my breath and I wished I was vaccinated.”

That’s one story. A Missouri mother of an unvaccinated 37-year-old who died of COVID-19 shared another: Kimberle Jones told the New York Times she got the jab as soon as she was able to, but she said her daughter believed that the government-run campaign was a plot against Black people like her.

“I want to be a voice for her,” Jones said. “I really think my daughter would want me to say, ‘Go get vaccinated.’”

Another mother shared with KHTV that her 13-year-old got coronavirus and was fighting for his life. Angela Morris of Arkansas said the hardest part about watching her son suffer is it could have been preventable if he were vaccinated.

“It’s very hard to see him in this situation. It’s very hard not knowing if he’s really going to come home anymore or not,” Morris said. “It’s heartbreaking. I wish I would’ve made better choices for him.”

Each of these stories is unique, but they also have many things in common: They’re filled with regret, death and acceptance. And they’re all centered around people who didn’t get vaccinated for some reason or another.

They’re not the only stories. Here are 18 more, from all over the country, stories of real people who were stridently anti-vaccine who changed their minds when the virus almost killed them or someone they love.

“I keep expecting him to walk through the door,” Mia Vinnard told KCRA. “But that’s not ever going to happen again. And that’s a hard pill to swallow.”

Vinnard’s husband, Brad, was in the hospital for two weeks before he died. “It all happened so fast,” she said. “I wish we would have gotten vaccinated. I mean one simple shot could’ve prevented all of this.”

Man says his brother, a conservative talk radio host who died of COVID, wishes he got vaccine

The brother of Nashville radio personality Phil Valentine shared with WWTN-FM on July 23 that his anti-vaccine brother was on supplemental oxygen and urged people to get the shot.

“First of all, he’s regretful that he wasn’t a more vocal advocate of the vaccination,” Mark Valentine said of his brother, according to the Associated Press. “For those listening, I know if he were able to tell you this, he would tell you, ‘Go get vaccinated. Quit worrying about the politics. Quit worrying about all the conspiracy theories.’”

California man changes heart about vaccine after hospitalization from COVID-19

Philly Baird of Rippon, California, was admitted to the ICU, where he was fighting for his life.

“I was an idiot. I didn’t get the shot, I believed in all the hoopla,” Baird, who is a Philadelphia Eagles football fan and legally changed his first name to Philly, told KCRA. “It’s not going to stop you from getting COVID, don’t be stupid. It’s just going to prevent you from fighting minute-by-minute to be with your loved ones.”

Anthony “Big Bunk” Moreno, a California father of two and stepfather of three, has been intubated in the ICU for more than a month. Known for his big heart and for helping anyone at the drop of a hat, he told his sister-in-law, Marisa Sanchez, he wished he would have been vaccinated.

His family members are getting vaccinated and hoping others will do the same. “Seeing him in the condition that he’s in, that’s what’s making me get the vaccine,” Nicole Cordero, Moreno’s girlfriend, told ABC 10.

Angelique Dieguez-Chamie, 30, of Butte, Montana, initially questioned whether the vaccine was safe. It was too new for her, she said.

One day, she felt an oncoming cold. The next, she couldn’t walk or see straight. When she was admitted to the hospital, her blood oxygen level was at 64% when it normally is at 90%.

“I almost left my 26-year-old husband a widower, because I didn’t get the vaccine to protect myself and others,” she told the Montana Standard. “I know it’s scary putting something in your body that has been out barely a year, but being in a hospital at 30 years old, thinking you’re never going to see your husband [or pets] again is way scarier, I promise you.”

Her husband got the vaccine. She wishes she had, too, after battling COVID-19.

“Now, knowing what I do, I would get the shot,” Shelly Wachter of Syracuse, New York, told the Lincoln Journal Star at the end of July. Doing so, Wachter  said, “could have saved myself and my family so much by having gotten the vaccination.”

She hopes her story will help change the minds of others. “I would like for the politicians to bow out and let the right people talk,” she said. “This is a real health issue, it’s not a political thing.”

“For being an unlucky son of a gun, I guess in a lot of ways I was lucky,” Quentin Bowen told the Omaha World-Herald after doctors said he wasn’t getting better, but also wasn’t getting worse.

“I would say trust the science, forget the politics and the social media, and get vaccinated,” Bowen said. “There’s nothing in this vaccine that can do to you what this disease can do to you, so why take the chance?”

An entire family gets COVID-19, and the father is hit the worst

“I was very short of breath. I couldn’t catch my breath. If I breathed in too deeply, I’d cough uncontrollably,” Chris Ard of Florida, who resisted the vaccine, told WKRG.

“I would recommend everybody get vaccinated,” Ard said. “Don’t wait because when it’s too late, it’s too late, and there were times I was going through this that I regretted not getting vaccinated.”

“I didn’t care about myself,” Kristen Hutton of Palm Beach Gardens, Florida, told WPBF a few days after giving birth. “I just kept telling them, ‘Just take the baby out! Just get the baby!’”

The baby, named Palmer, was delivered healthy and happy. Hutton wished she got the shot so she could have avoided such a painful ordeal in an important moment of her life.

“I thought I was going to die,” she said. “When I was laying on the table going into the OR [operating room], I couldn’t breathe. So they had me lay flat. I said, ‘I can’t breathe. I can’t breathe.’”

“He wanted to wait a few years to see you know, if there’s any side effects or anything from it,” Paul Nuclo, stepfather of Blake Bargatze, told WSB-TV. “As soon as he got in the hospital, though, he said he wished he had gotten the vaccine.”

Bargatze’s mother, Sheryl Nuclo, is telling others to get vaccinated. “Maybe if some people were kind of on the fence and swaying, he wants them to see what might be the extreme of what can happen,” Sheryl said. “Not using a fear tactic, but it can happen.”

“Before she got intubated, one of the last things she told her sister was ‘Please make sure my children get vaccinated,'” Dottie Jones, cousin of Lydia Rodriguez, told ABC 13. “It’s hard to do that in hindsight. To think that she wouldn’t be there. She would be there for her kids right now if she had been vaccinated.”

Newly engaged couple wanted to wait a year for the vaccine. Fiancee wishes they hadn’t.

“We just wanted to wait a year from when it started to be — when it came out, like when it started to be available to people, like, just to watch and see what people’s reactions were to it,” Jessica DuPreez said on CNN of her and her fiance, Michael Freedy, not being vaccinated. “We didn’t think a year would matter.”

Freedy’s last text to Jessica before he died was straight to the point. “I should have gotten the damn vaccine,” he wrote.

The couple have a son who would text his dad at the hospital. “Dad, are you still alive?” one read.

“If you haven’t gotten it yet, go get the vaccine. I wish I did,” Steve Witschel said in a selfie video obtained by ABC. “The last week or so, my life was hell. I thought I was going to die.”

Witschel is dealing with the long-term effects of COVID-19. “I’ve never been that sick and never felt that miserable, never had that little energy. I could barely brush my teeth without running out of breath. It’s horrible. Once I’m out of this, hopefully I get out of this, I will get the vaccine for sure. And I’m going to wear a mask all the time,” he said.

Unsure whether he’ll survive, Virginia man wants to change as many minds as possible while he still can

“When you feel like you have to fight for your life, you don’t realize that you’re fighting for every single breath all day long,” Travis Campbell told ABC News. “If I have a day or two left, I don’t want to waste my time,” he said. “I want to help as many people as I can, to let them see the real truth, that [the delta variant] is real, and it’s only getting stronger and faster.”

After losing a relative, a Florida family turns the funeral into a vaccine and testing site

“He was in the hospital. He said, ‘Bae, I’m going to get the vaccine when I get out of here,’” Charnese Davis told WFTV 9 about her late husband, Marquis Davis. “So, he was going to get it. I was like ‘Good, I’m so happy you said that, but it’s too late.’” With the help of their church, the wake and funeral service were turned into an opportunity to help others in the community.

“Things just started going through my mind. I should have gotten vaccinated and now I’m putting my family through this, for something I could have prevented,” Lateasa McLean told WSOC-TV.

“My grandson, and my granddaughter, they’re wheeling me out and I’m thinking, ‘Is this going to be the last time that I see them?’” McLean recalled.

After losing dad and brother in same week, Florida woman urges others to get vaccinated

“It has been one of the most, roughest and hardest experiences that I have ever had to go through in my whole life and I would never, ever wish this on anybody in their family,” Payten McCall told WBAL-TV.

“I wanted him so badly to walk me down the aisle and he won’t be there,” McCall added. “And it’s all because we were scared. We were scared to get the vaccine and we were scared about everything.”

Do you have a story of regret over not getting vaccinated to share? Email agraff@sfgate.com.

Sorgente articolo:
21 heartbreaking stories of people who regret not getting a COVID-19 vaccine – SFGate