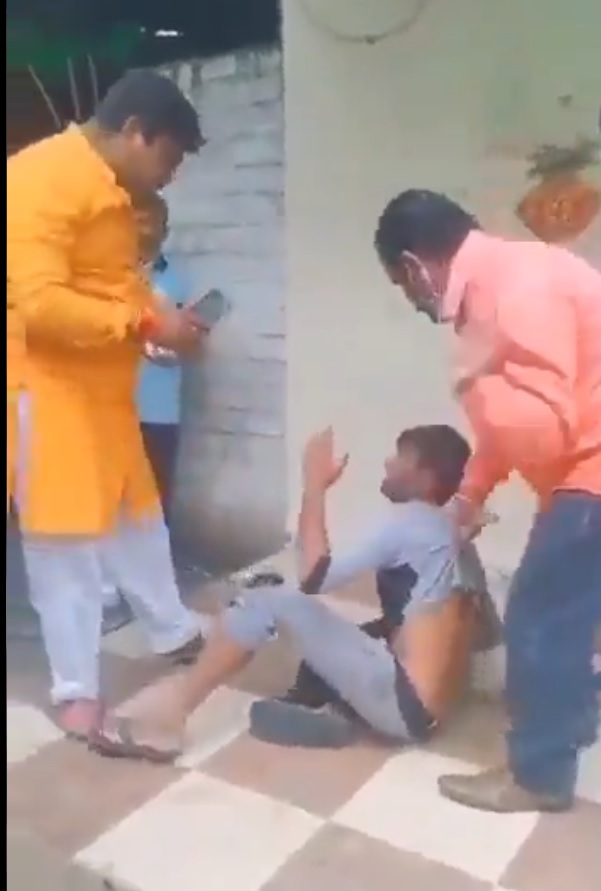 Police have arrested three persons on charges of assaulting a bangle seller, but the episode took a new turn when he himself was later booked under the POCSO Act for allegedly touching a 13-year-old girl inappropriately in Indore city of Madhya Pradesh, officials said on Monday.

The bangle seller, Tasleem Ali (25), was also accused of possessing fake documents related to his identity, they said.

The officials said the minor girl  filed a complaint with the Banganga police station in Indore against Ali, alleging he introduced himself as “Golu, son of Mohan Singh” to sell bangles at her home on Sunday and after describing her as “very beautiful”, he touched her inappropriately.

When the girl raised an alarm, her mother rushed out of home and when the bangle seller tried to escape from the spot, neighbours and other local residents caught and thrashed him, they said, adding three persons were arrested for assaulting him.

In the melee, Ali, who hails from Uttar Pradesh, left behind a carry bag in which two Aadhaar cards were found, the officials said.

Based on the girl’s complaint, a case under the Protection of Children from Sexual Offences Act (POCSO) and IPC sections 420 (cheating) and 471 (using fake documents as real ones), among others, was registered against Ali, the officials said.

Superintendent of Police (SP) Ashutosh Bagri said, “Cops have found two Aadhaar cards of different names from the carry bag of Ali besides a burnt voter identity card in which his name was not clear. But in the column of father’s name, ‘Mohan Singh’ is printed on it.” State Congress spokesman Aminul Khan Suri posted a 44-second video of Hardoi, Uttar Pradesh-based Ali, in which he is heard stating, “Years back, an identity card was made in my village with my pet name “Bhura” while in the Aadhaar card my name is written as Tasleem Ali. None of these identity documents are fake and they both are real.”

Meanwhile, Madhya Pradesh home minister Narottam Mishra said in Bhopal, “The controversy started when this man described himself as a Hindu to sell bangles to women during the holy month of saavan, while he actually belongs to another community.”

“The home department has given a report that this man (Tasleem Ali) had identified himself with a Hindu name though he belongs to another community. Cops have found two suspicious Aadhaar cards from his possession,” he said.

The home minister said legal action was taken in matters related to the bangle seller, including the assault on him.

Three persons, who were part of the crowd that had assaulted Ali,  were arrested, Mishra said.

In a viral video of the incident, some people are purportedly seen thrashing the bangle seller even as he begs for mercy.

A man was also seen levelling allegations of eve-teasing against Ali and egging on people to beat him up.

The bangle seller had filed a complaint in the Central Kotwali police station late Sunday night alleging five to six persons, who were part of a mob, started beating him up after asking his name in the Govind Nagar area of Indore, the officials said.

Ali also alleged in his complaint that members of the mob used objectionable words against him and snatched Rs 10,000 in cash, mobile phone, Aadhaar card and other documents besides bangles worth over Rs 25,000 from him.

A police official said based on the man’s complaint, an FIR was earlier registered under IPC sections 153-A (promoting enmity between different groups), 141 (unlawful gathering), 147 (rioting), 395 (dacoity), 120- B (criminal conspiracy) and other relevant provisions against unidentified persons.  PTI

Sorgente articolo:
Case filed against bangle seller under POCSO Act in Indore; 3 held for assaulting him – The Tribune India