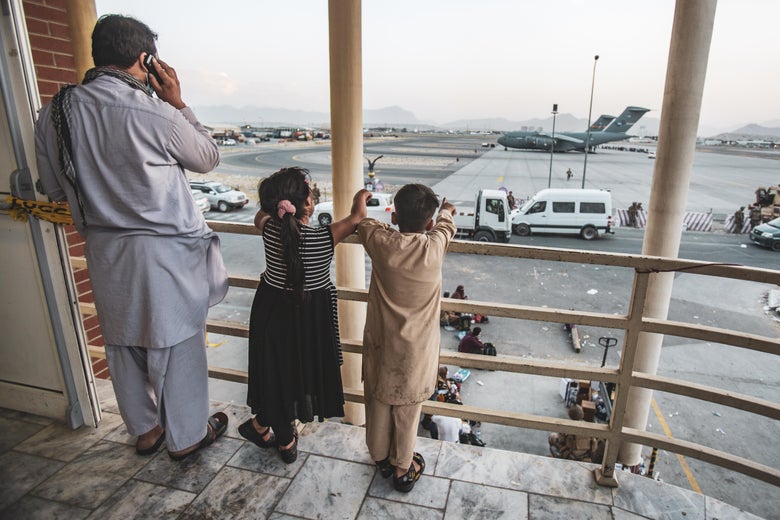 As the U.S. and allied Western forces frantically try to evacuate citizens and local allies from Afghanistan, CIA Director William Burns was in Kabul Monday for secret meetings with the Taliban’s de facto leader Abdul Ghani Baradar. Burns’ presence in the country is yet another indicator of how quickly power has shifted in the country, a swing that has only accelerated as the Taliban took control of Kabul nine days ago, further complicating American evacuation plans. The U.S. is facing a self-imposed Aug. 31 deadline to wrap up operations in the country, including its airlift of American citizens and tens of thousands of Afghans that desperately trying to flee the country.

Over the past few days, the U.S. flew more than three dozen flights out of the country carrying nearly 20,000 people, the Associated Press reports, a considerable escalation in what Biden has called “one of the largest, most difficult airlifts in history.” U.S. officials said the pace of evacuation has picked up, in part, due to coordination with Taliban commanders that has made it easier for evacuees to physically get into the Kabul airport. After early moments of chaos and confusion, there has been an uptick in the airlifts, but Biden is facing pressure from allies to extend the evacuation deadline to get as many endangered people out of the country as possible.

A Taliban spokesman roundly rejected the possibility of delaying the U.S. withdrawal saying that would cross a “red line” if allied forces lingered in the country. “Since the Taliban seized the capital Aug. 15, completing a stunning rout of the U.S.-backed Afghan government and military, the U.S. has been carrying out the evacuation in coordination with the Taliban, who have held off on attacking Americans under a 2020 withdrawal deal with the Trump administration,” the AP notes. That could change if U.S. forces unilaterally extend the evacuation deadline, though so far there are indications that the Taliban is trying to avoid outright antagonization of the West on its way out.

“Western officials say the Taliban are seeking international recognition of their takeover as well as foreign aid, points of leverage that could be used to extract concessions from the group as the U.S. and others race to evacuate their own citizens and Afghan allies amid chaos at Kabul airport, which is currently controlled by U.S. troops,” the Wall Street Journal reports. “The Taliban are also seeking to avoid new sanctions that could hit the impoverished country’s finances.”