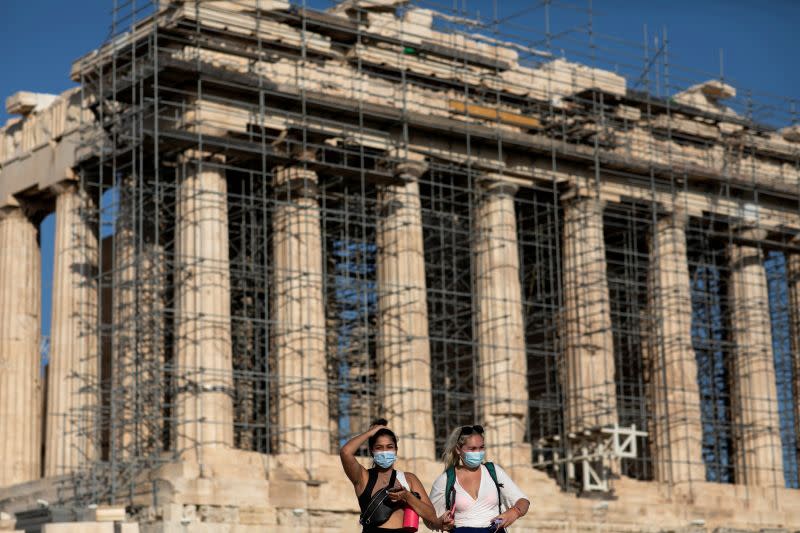 ATHENS (Reuters) -Greece said on Tuesday it would end free testing for unvaccinated people to encourage them to get inoculated and head off any renewed spike in Delta variant infections of the coronavirus.

The country has recorded a total of 566,812 confirmed cases of COVID-19 infections and 13,466 deaths since reporting its first COVID-19 outbreak in February 2020.

Health authorities said that only 27 cases in Tuesday’s infection tally were “imported”, meaning they were detected after checks at border entry points.

New measures to come into effect on Sept. 13 stop short of forcing people to take a jab, but end free testing and oblige unvaccinated persons to test either once or twice a week, depending on their profession.

Authorities said some six million people in the country of 11 million had already received one or two doses of a coronavirus vaccine, but that a million more were needed to build adequate immunity through the population.

“In contrast to autumn of last year, this autumn everyone can be vaccinated,” said Health Minister Vassilis Kikilias. “Do we live, or play Russian roulette with the coronavirus?”

Free testing for vaccinated people will continue, he said.

“These measures are not punitive. They are our duty to all those who went through 18 months of the pandemic carefully, those who lost their shops, jobs, had to work from home to protect themselves.”

About 53 percent of the Greek population is fully vaccinated. Authorities hope to increase that figure to 70 percent by the autumn.

(Reporting by George GeorgiopoulosEditing by David Holmes and Mark Heinrich)