More than 9,800 Israelis tested positive for COVID-19 on Monday, close to an all-time high of new daily cases since the start of the pandemic. The positivity rate of all those tested on Monday stood at 6.63%, a high not seen since February.

With the release of new figures Tuesday morning, more than 1 million Israelis total have tested positive for COVID since the outbreak began in early 2020.

During the peak of the third wave in mid-January, more than 10,000 cases were reported in one day, but that figure has not been replicated since. On August 16, 8,772 new COVID cases were reported, which was the highest one-day figure in the fourth wave so far.

The ministry said that 12 people died on Monday and 30 on Sunday.

Despite an extensive and prolonged government campaign, more than 1 million eligible Israelis have yet to receive the COVID-19 vaccine.

According to statistics released by the Health Ministry on Monday, the approximately 1,080,000 people who have not received any dose of the vaccine are most likely to be aged 12-39 and come from an underprivileged background. 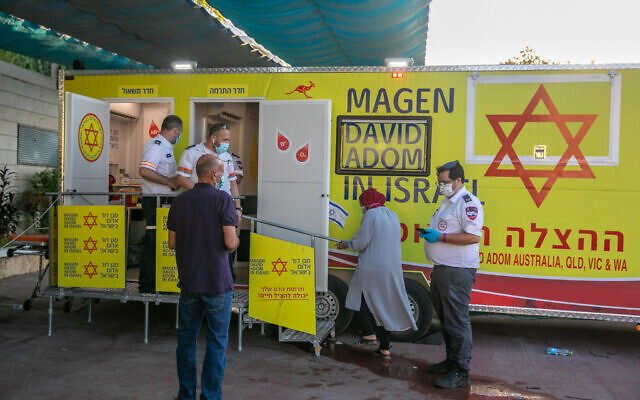 Israelis stand in line to receive the COVID-19 vaccine at a Magen David Adom mobile vaccine unit in the town of Kafr Qasim on August 23, 2021. (Yossi Aloni/Flash90)

According to the ministry, 31% of them are from the Arab population and 16% from the Haredi community. Therefore, both Arabs and Haredim are overrepresented in the population of vaccine refusers, since they represent approximately 21% and 12% of the total population, respectively.

Overall, older Israelis are the most likely to be vaccinated, with more than 90% of all those over age 60 having received two doses of the Pfizer COVID vaccine. Meanwhile, just 29% of those aged 12-15 are fully vaccinated, and 69% of 16- to 19-year-olds.

Those parents who refuse to have their teenagers vaccinated are less likely to be well educated, and more likely to have a below-average income, be between the ages of 34 and 45 and to live in Jerusalem or the south, according to the Health Ministry. The reasons given by parents in the general population for not vaccinating their children were: 24% concerned about side effects, 17% said there is not enough information about the long-term effects of the vaccine and 13% said the virus is not dangerous to children.

Among the Arab population, the ministry reported, the Bedouin community is the least vaccinated and has the least access to vaccination centers. Among parents in the Arab community who did not vaccinate their children, 19% said they are concerned about the vaccine’s long-term effects and 19% said they lack faith in its effectiveness. 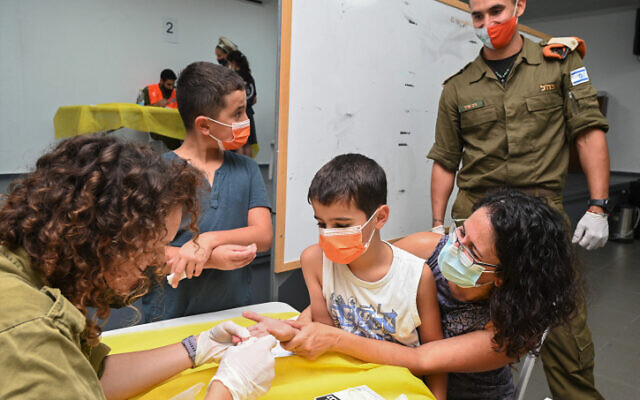 IDF officers and soldiers from the Home Front Command conduct serological testing for antibodies in children aged 3 to 12 in Katzrin, in the Golan Heights, August 22, 2021. (Michael Giladi/Flash90)

And in the Haredi population, a plurality of parents who have declined to vaccinate their children — 34.4% — believe that they have already had the coronavirus and are therefore naturally protected.

As Israel prepares to reopen schools nationwide on September 1, approximately 37,000 teachers and education staff have yet to be vaccinated. Educators who are unvaccinated will have to present a negative COVID test every 72 hours, and will have to pay for the tests themselves and conduct them on their own free time, Channel 12 reported.

According to the Kan public broadcaster, school employees who refuse to get vaccinated or tested will be refused entry to the school and placed on unpaid leave.