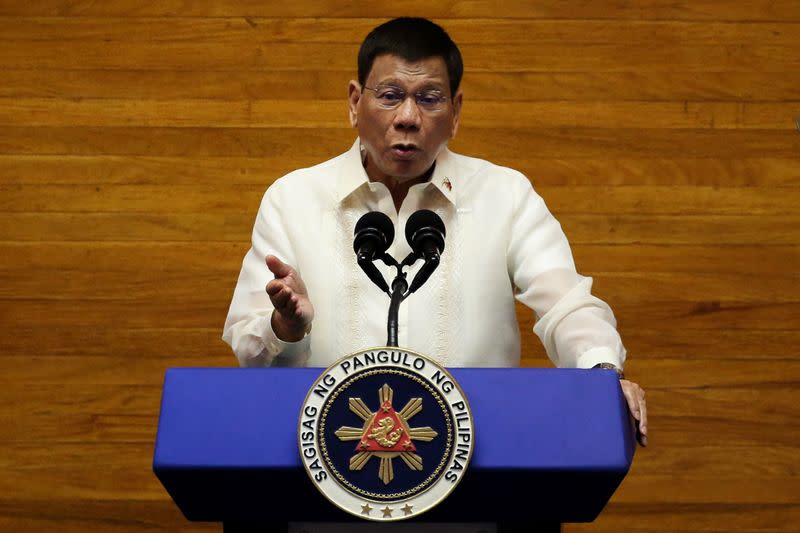 MANILA (Reuters) -Philippine President Rodrigo Duterte has agreed to be the ruling party’s vice presidential candidate in next year’s elections, the PDP-Laban party said on Tuesday, prompting accusations by opponents that it was a ploy to maintain his grip on power.

The announcement came ahead of the party’s national convention on Sept. 8, where it is also expected to endorse Duterte’s aide and incumbent senator Christopher “Bong” Go to be its presidential candidate in the 2022 polls.

Duterte was heeding “the clamour of the people,” Karlo Nograles, executive vice president of the PDP-Laban party, said in a statement.

Under the constitution a president can only serve one term, and the announcement had been widely anticipated as Duterte, had already hinted he could seek the number two job, a move seen by political observers and critics as a backdoor to the presidency https://www.reuters.com/world/asia-pacific/philippines-duterte-ponders-play-power-political-exit-looms-2021-07-08.

They believe he could be making a play for retaining power by taking over as president under a scenario in which Go wins and then resigns, enabling Duterte to shield himself from possible legal actions when he leaves office https://www.reuters.com/world/asia-pacific/philippines-pacquiao-ousted-president-ruling-party-after-row-2021-07-17.

“This is really part of the scheme of the Duterte clique to extend not only influence but control of government,” said opposition congressman Carlos Zarate.

Duterte-backer Nograles said the move would “guarantee continuity of the administration’s programmes during the past five years,” including his war on drugs, which an International Criminal Court (ICC) prosecutor wants investigated. https://www.reuters.com/world/asia-pacific/international-criminal-court-prosecutor-requests-probe-into-philippines-killings-2021-06-14

Duterte’s legal counsel Salvador Panelo has described as “unfounded and illogical” claims that he would control the office of the president should he clinch the vice presidency.

Opinion polls show Duterte remains hugely popular, despite his bloody anti-drugs campaign and criticism of the pandemic response, but analysts say his popularity would not necessarily rub off on Go.

In the Philippines, the president is elected separately from the vice president.

Duterte has previously said he wanted Go to be his successor. His endorsement in 2019 helped Go to become a senator, a post he carries out alongside his duties as Duterte’s personal aide.

“In choosing his successor, President Duterte is grappling with an unstated urgent concern: who can be best trusted to protect and insulate him from almost certain criminal suits once he is out of power,” think tank, the Center for People Empowerment Governance, said.

Go has been the 76-year-old president’s closest aide since the late 1990s, when Duterte was a congressman representing his hometown Davao City.

Previously, Go has insisted he is not interested in the presidency.

Duterte’s daughter, Davao City mayor Sara Duterte-Carpio, has outshone Go in opinion polls, but she and her father have played down the prospect of her running.

Political analyst Victor Manhit said until candidacies were officially filed, starting in October, everything is speculation, with opinion polls showing other vice presidential candidates including a Manila mayor just behind Duterte.