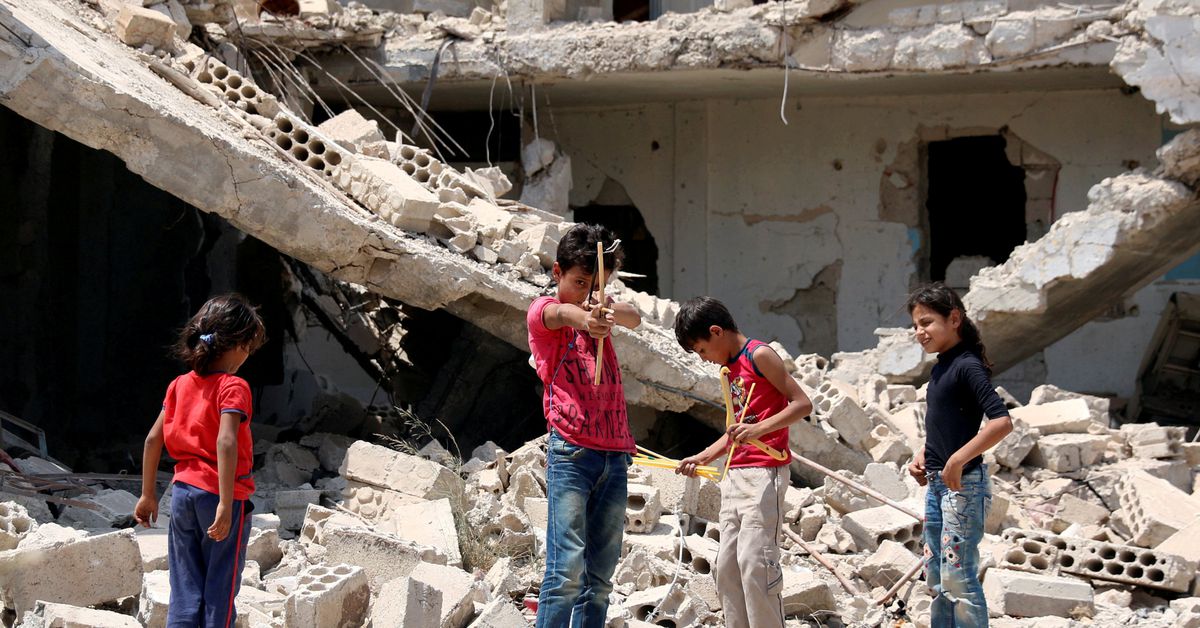 Children play along a street in a rebel-held part of the southern city of Deraa, Syria August 20, 2017. REUTERS/Alaa al-Faqir/File Photo

AMMAN, Aug 23 (Reuters) – Syrian army units aided by pro-Iranian militias have staged a major assault on an opposition enclave in the southern border city of Deraa in a bid to retake the last opposition stronghold in southern Syria, residents, army and opposition sources said.

Troops amassed around the sprawling government-held city sought to advance into the area known as Deraa al Balaad, which has particular significance in the Syrian conflict as it was centre of the first peaceful protests against Assad family rule in 2011 which were met by deadly force before spreading across the country.

Opposition fighters said they had repulsed the attack from the western side of the enclave, which has been under a two-month siege during which the army has prevented food, medical and fuel supplies coming in but opened a corridor for civilians to leave, residents and local figures said.

Pro-Iranian army units led by the elite Fourth Division who have also encircled the enclave poured in new fighters and set up new checkpoints on the main Damascus highway leading to the Jordanian border crossing, a senior army source said.

Another army source said fighting was continuing, but did not elaborate. State media have in recent days said the army was preparing to end a “state of lawlessness and chaos” and reimpose army control.

There was no indication of casualties in the latest incident.

The Syrian army, aided by Russian air power and Iranian militias, in 2018 retook control of the province of which Deraa is the capital and which borders Jordan and Israel’s Golan Heights.

Local negotiators from both sides say Moscow, which plays a leading role in maintaining security in the region, had so far held back the army from a military offensive, which they say Iranian-backed army units who have a major presence in Deraa have been pushing for.

Russian generals who on Aug. 14 presented local leaders and the army with a road map that averts a military showdown are trying to win over the opposition, some of whom fear the plan reneges on a deal brokered by Russia three years ago.

The deal at the time forced thousands of mainstream Western- backed rebels to hand over heavy weapons in 2018 but kept the army from entering Deraa al Balaad.

Moscow’s plan seen by Reuters offers ex-rebels a pardon but allows the army to gradually take over the enclave, while offering safe passage to former rebels who oppose the deal to leave for opposition areas in northwest Syria.

Residents say Russian military police have stepped up their presence in the city and its outskirts, where they often act as mediators between locals in disputes with the army and security forces.

The enclave until recently had a population of some 50,000 but most had fled in the last two weeks, so the area has become a virtual ghost town with several thousand rebels dug in.

The enclave and other towns in southern Syria have, since the state regained control of the province, held sporadic protests against President Bashar al Assad’s authoritarian rule that are rare in areas under state control.

“They want to stamp out the remaining voice of the revolution in southern Syria,” said Abu Jehad al Hourani, a local civilian leader in the enclave.