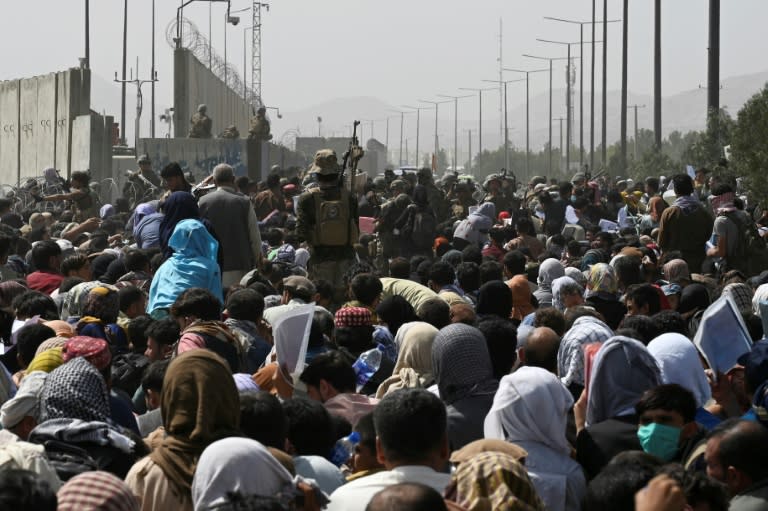 The Taliban on Tuesday urged skilled Afghans not to flee the country, as the new rulers of Afghanistan warned the United States and its NATO allies they would not accept an extension to a looming evacuation deadline — even as Western countries said time was running out.

A spokesman for the hardline Islamist group told America to stop taking “Afghan experts” such as engineers and doctors out of the country.

“This country needs their expertise. They should not be taken to other countries,” Zabihullah Mujahid told a press conference in the capital Kabul.

“They should not encourage the Afghan people to flee Afghanistan.”

European nations have said they would not be able to airlift at-risk Afghans before the August 31 cut-off, and United States President Joe Biden has faced calls from all corners to extend the evacuation window.

But speaking at a press conference in the capital Kabul, Taliban spokesman Zabihullah Mujahid said the Islamist group opposes an extension.

“They have planes, they have the airport, they should get their citizens and contractors out of here,” said Mujahid.

US-led troops have ramped up operations to get thousands of people out of Kabul by August 31 — a deadline set by the US before the fall of the country for all foreign troops to have pulled out of Afghanistan.

President Biden has said he will stick to the schedule but has faced growing pressure to negotiate more time for the evacuations.

Germany said on Tuesday that Western allies simply cannot fly every Afghan who needs protection out of Kabul before the cut-off date.

“Even if (the evacuation) goes on until August 31 or even a few days longer, it will not be enough,” Foreign Minister Heiko Maas told Bild TV.

Earlier France said it would have to end evacuations from Kabul’s airport on Thursday if the US stuck to the deadline, and Spain said it would not be able to rescue all Afghans who served Spanish missions.

Britain, meanwhile, has said it will lobby for an extension at a virtual G7 summit later Tuesday.

About 50,000 foreigners and Afghans have fled the country from Kabul’s airport since the Taliban swept into power nine days ago, according to the US government.

Many Afghans fear a repeat of the brutal interpretation of Islamic law that the Taliban implemented when first in power from 1996-2001, or retribution for working with the US-backed government over the past two decades.

The Taliban achieved their stunning victory thanks to Biden pulling out nearly all American troops from Afghanistan, following through on a deal struck with the movement by then-president Donald Trump.

However, Biden was forced to redeploy thousands of troops after the fall of Kabul to oversee the airlift.

According to the Washington Post, US Central Intelligence Agency chief William Burns held a secret meeting in Kabul on Monday with Taliban co-founder Mullah Abdul Ghani Baradar, although no details were reported and neither the CIA nor the Taliban confirmed it.

The rush to leave Kabul has sparked harrowing scenes and left at least eight people dead.

Some have been crushed to death and at least one, a youth football player, died after falling off a plane.

The German defence ministry said Monday an Afghan soldier was killed and three others wounded in a firefight with unknown assailants.

Margarita Robles, the Spanish defence minister, said the security situation was getting worse.

“The situation is frankly dramatic and besides, with each passing day, it is worse because people are conscious that time is running out,” she said in an interview with news radio Cadena Ser.

The Taliban have repeatedly claimed to be different from their 1990s incarnation, and have declared an amnesty for government forces and officials.

But an intelligence assessment conducted for the United Nations said militants were going door-to-door hunting former government officials and those who worked with US and NATO forces.

In the capital and other cities, the former insurgents have enforced some sense of calm, with their fighters patrolling the streets and manning checkpoints.

The Taliban are also intent on quashing the last notable resistance to their rule in the Panjshir Valley, north of the capital.

The movement, named the National Resistance Front, is led by the son of famed anti-Taliban commander Ahmad Shah Massoud and has recruited members of ex-government military forces.