Algeria formally broke off diplomatic relations with neighboring Morocco on Tuesday, with the foreign minister citing a series of alleged hostile acts including Rabat’s recent rapprochement with Israel.

The move culminates a period of growing tension between the North African countries which are mired in a decades-long feud, with their borders closed to each other. There was no immediate reaction from Morocco.

“Algeria has decided to break diplomatic relations with Morocco starting today,” Foreign Minister Ramtane Lamamra said at a news conference, in which he read a statement from the president.

The announcement comes nearly a week after President Abdelmadjid Tebboune told a meeting of Algeria’s High Security Council that “incessant hostile acts perpetrated by Morocco have meant the need for a revision in relations between the two countries and the intensification of security checks” at the western borders with Morocco, the official APS news agency reported.

Both countries are allies of western nations, and the move risked complicating diplomacy in the region. Both are important in the fight against terrorism in the nearby Sahel region.

Arab League Secretary-General Ahmed Abdul Gheit called on both to avoid further escalation. He expressed hope the two countries can maintain a “minimal level of ties” to ensure stability for themselves and within the region. 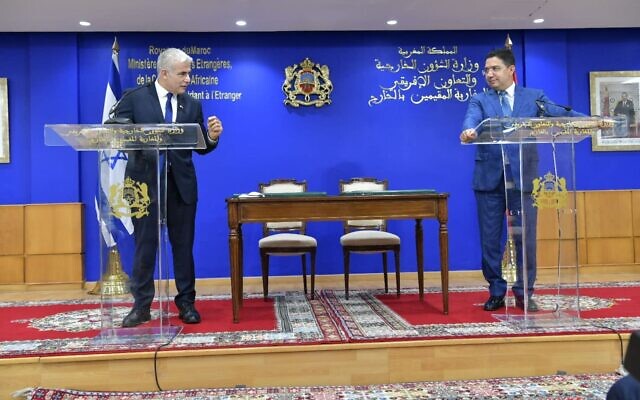 The Algerian foreign minister cited an accumulation of grievances against Morocco leading to Tuesday’s decision.

He also denounced “massive and systematic acts of espionage” by Morocco, a reference to allegations that the kingdom’s security services used the Pegasus spyware developed by the Israeli NSO Group against its officials and citizenry, APS said. Morocco adamantly denies such claims.

A normalization deal between Morocco and Israel in December also triggered fresh tensions between Rabat and Algiers because the US recognized Moroccan sovereignty over Western Sahara as part of the accord.

Other criticism ranged from reported remarks by Morocco’s UN ambassador in mid-July to recent comments by the Israeli foreign minister on a historic visit to Morocco as part of their normalization of ties.

“Morocco has turned its territory into a platform allowing foreign powers to speak with hostility about Algeria,” APS quoted Lamamra as saying.

Lamamra on Tuesday accused Foreign Minister Yair Lapid of “senseless accusations and veiled threats” after the top Israeli diplomat expressed “worries about the role played by Algeria in the region.”

On his first visit to Morocco since the countries normalized ties, Lapid said his concerns were based on fears Algeria was “getting close to Iran,” as well as “the campaign it waged against the admission of Israel as an observer member of the African Union.” 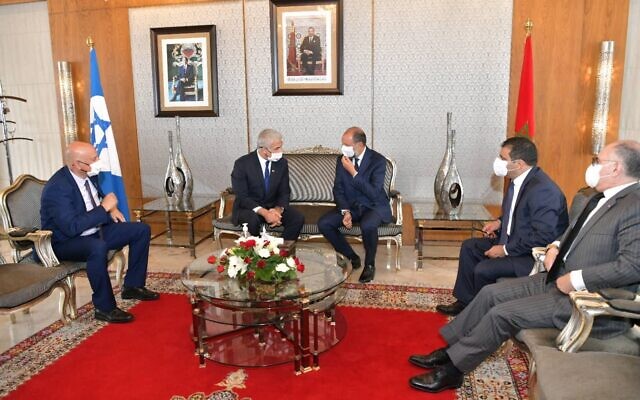 “Since 1948, no Israeli official made a hostile declaration to an Arab country from another Arab country,” APS quoted Lamamra as saying.

Responding to the remarks, a diplomatic official told The Times of Israel that Lapid views Israel and Morocco as part of a “pragmatic and positive axis in the region, as opposed to an opposing axis, which Iran and Algeria are part of.”

“It would better for Algeria to focus on the large set of problems it faces, rather than dragging Israel into its own conflicts,” the source added, saying that the Algerian foreign minister’s accusations “lacked any foundation or substance.”

“What’s important are the close ties between Israel and Morocco,” which were demonstrated during Lapid’s recent visit,” the official said. 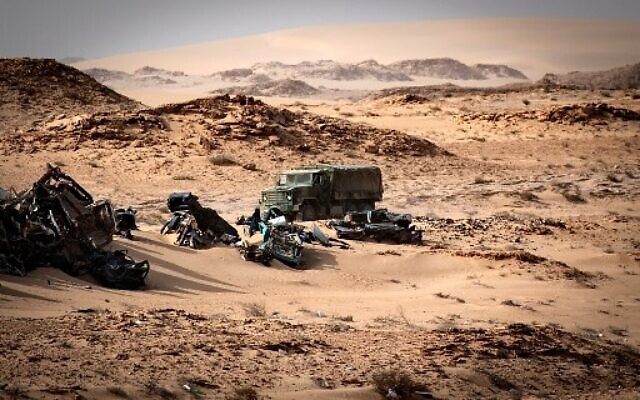 A Moroccan army vehicle drives past car wreckages in Guerguerat located in the Western Sahara on November 24, 2020, after the intervention of the royal Moroccan armed forces in the area. (Fadel SENNA / AFP)

Morocco’s UN ambassador also allegedly said that the people of Algeria’s Berber region of Kabyle should have the right to determine their status. He also cited Algeria’s claims that Morocco backs a separatist group in Kabyle, known as MAK, which Algiers has placed on a terrorism list. Algeria has suggested that MAK had a role in wildfires this month in the Kabyle region that killed scores of people, including more than two dozen soldiers.

The issue of Kabyle recalls Algeria’s support for a bid by the Polisario Front, a pro-independence movement based in southern Algeria, for self-determination in the disputed Western Sahara that was annexed by Morocco in 1975.

Morocco wants autonomy for the region under its supervision, while Algeria wants self-determination via a referendum.

“For all these reasons, based on the facts … I have announced, Algeria has decided to break relations,” Lamamra said.