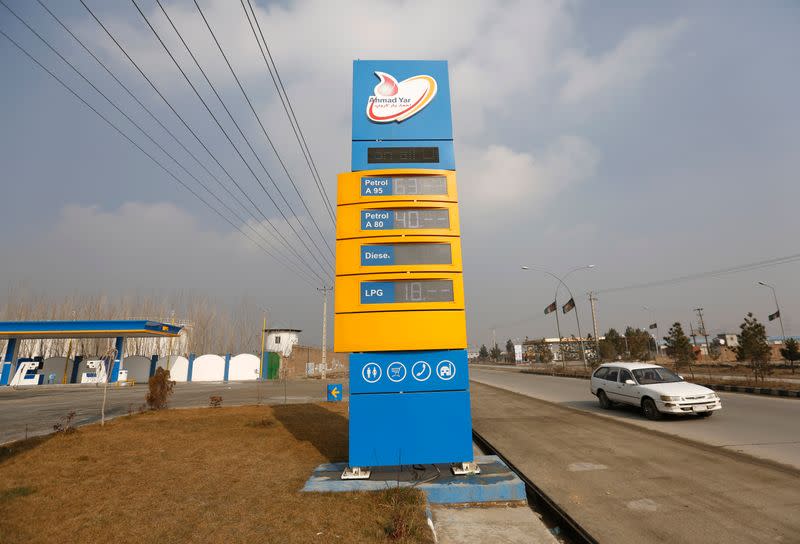 By Bozorgmehr Sharafedin and Julia Payne

LONDON (Reuters) -Iran resumed fuel exports to Afghanistan a few days ago following a request from the new Afghan government, which feels empowered by the U.S. withdrawal to buy the sanctioned nation’s oil more openly, an Iranian official told Reuters.

The Sunni Muslim group seized power in Afghanistan last week as the United States and its allies withdrew troops after a 20-year war.

The price of gasoline in Afghanistan reached $900 per tonne as many Afghans drove out of cities, fearing reprisals and a return to a harsh version of Islamic law the Taliban imposed when in power two decades ago.

To counter the price spike, the new Taliban asked Shi’ite Iran to keep the borders open for traders.

“The Taliban sent messages to Iran saying ‘you can continue the exports of petroleum products’,” Hamid Hosseini, board member and spokesperson of Iran’s Oil, Gas and Petrochemical Products Exporters’ Union, in Tehran, told Reuters.

The Taliban sent messages to Iranian traders and to an Iranian chamber of commerce, which has close links to the government.

As a result, the Islamic Republic of Iran Customs Administration (IRICA), which is a part of the government, lifted a ban on fuel exports to Afghanistan, which had been in place since Aug. 6 because of Iran’s concerns about the safety of trading in the country.

Those concerns have been eased by the Taliban’s attitude, Hosseini said.

He also cited the Taliban’s decision to cut tariffs on imports of fuel from Iran and other neighbouring countries and shared with Reuters an official document issued by Islamic Emirate of Afghanistan – the name by which the Taliban refers to itself.

The document specified a 70% discount on tariffs on imports of gasoline, diesel and LPG from the neighbouring countries to Afghanistan.

Iran sits on the world’s fourth-largest oil reserves, but the latest round of U.S. sanctions imposed by former U.S. President Donald Trump in 2018, has significantly reduced Iranian oil exports.

Iran has nevertheless managed some trade, notably by trucking fuel to neighbours such as Afghanistan, and the U.S. troop withdrawal has made leaders of both Iran and Afghanistan less nervous about dealing more openly, Hosseini said.

The main Iranian exports to Afghanistan are gasoline and gasoil. Iran exported about 400,000 tonnes of fuel to its neighbour from May 2020 to May 2021, according to a report published by PetroView, an Iranian oil and gas research and consultancy platform.

Iranian fuel flows have been vital to Afghanistan in the last few years, according to traders and an Afghan government report, seen by Reuters.

Between March 2020 and March 2021, Iran accounted for $367 million of imports, mostly of fuel, according to the report compiled by the Afghan ministry of finance, chambers of commerce and data from private enterprises.

The next two most important oil suppliers are Turkmenistan and Uzbekistan with trade, mostly oil, valued at $257 million and $236 million respectively.

A source with direct knowledge of the matter, who asked not to be named, said more than 1 million tonnes per year, or over 20,000 barrels per day, of Iranian fuel goes to Afghanistan.

The main destinations of Iran’s fuel have been eastern provinces near the Iranian border, and southern regions like Kandahar and Nimrooz where the Taliban had a strong influence even before the push of recent weeks, Hosseini said.

Afghanistan has not developed an oil industry of its own. The country has six mini-refineries that only produce several thousand barrels per day of refined products each.

The source with direct knowledge said supplies of Turkmen condensate (light crude oil) has ceased a month ago because of the security situation, but predicted it would resume in about two weeks’ time.

“The problem is the banks stopped working three days ago so we might be back to bags of cash,” the source said.