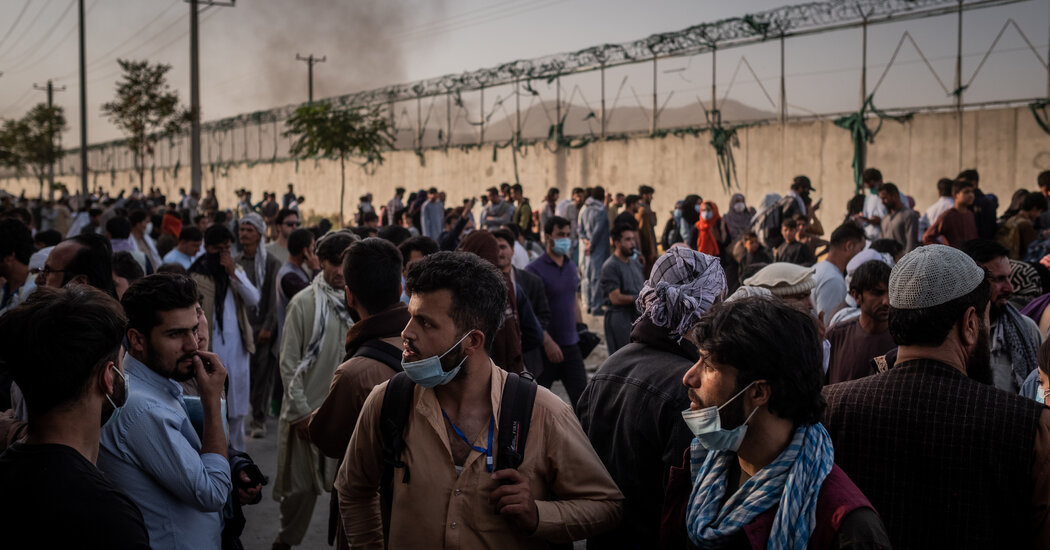 WASHINGTON — At least 1,500 American citizens remain in Afghanistan with just days left before the scheduled U.S. withdrawal from the country, but officials on Wednesday acknowledged the reality that tens of thousands of Afghan allies and others at high risk of Taliban reprisals would be left behind.

The sound of gunfire, and clouds of tear gas and black smoke, filled the air around the international airport in Kabul, the capital, as thousands of Afghans massed at the gates on Wednesday, desperate to escape ahead of the American military’s final departure on Aug. 31, after 20 years of war.

The U.S. Embassy warned Americans later in the day to stay away from the airport and told anyone outside the perimeter to “leave immediately.” The British and Australian governments issued similar warnings.

A senior U.S. official, who spoke on the condition of anonymity to describe confidential assessments, confirmed that the United States was tracking a “specific” and “credible” threat at the airport from the Islamic State affiliate in Afghanistan, which has carried out dozens of attacks in recent years and is a rival of the Taliban.

As military and government charter flights took off every 45 minutes as part of an airlift, Biden administration officials said they had evacuated about 82,300 people since Aug. 14, the day before Kabul fell to the Taliban. Around 4,500 of them were American citizens, with 500 more expected to depart soon.

But Secretary of State Antony J. Blinken said the government was trying to track down around 1,000 American citizens still believed to be in Afghanistan who had not responded to a frantic flurry of emails, phone calls or other messages offering to evacuate them.

“In this critical stretch, we’re focused on getting Americans and their families onto planes, out of Afghanistan, as quickly as possible,” Mr. Blinken said at the State Department.

He also sought to assure Afghans who had worked with the U.S. military or embassy, and potentially hundreds of thousands of people who challenged the Taliban’s extremist ideology, that “they will not be forgotten.”

Likening images and reports of Afghans being trampled at the Kabul airport in the crush to evacuate to “getting punched in the gut,” Mr. Blinken said it would be incumbent on the Taliban to guarantee their safe passage.

He signaled that such an arrangement could be reached with a mix of economic and diplomatic pressure, and the lure of international aid, but he would not discuss his level of confidence in the Taliban to keep their word beyond vaguely citing what he called their public and private commitments to allow people to leave.

“Let me be crystal clear about this: There is no deadline on our work to help any remaining American citizens who decide they want to leave to do so, along with the many Afghans who have stood by us over these many years, and want to leave, and have been unable to do so,” Mr. Blinken said. “That effort will continue every day past Aug. 31.”

A Taliban spokesman, Zabihullah Mujahid, said on Wednesday that Afghans with valid travel documents would not be prevented from entering the airport if they were allowed in by American and Afghan forces there.

In his first sit-down interview with a Western media organization since the Taliban’s arrival in Kabul, Mr. Mujahid disputed reports that the group would begin to keep Afghans away from the airport, which had been based on his statements during a news conference a day earlier.

“We said that people who don’t have proper documents aren’t allowed to go,” he said. “They need passports and visas for the countries they’re going to, and then they can leave by air. If their documents are valid, then we’re not going to ask what they were doing before.”

He also insisted that the Taliban would forgive those who fought against them, and that women would be allowed to attend school and work, within what he described as Islamic principles. Human rights officials have dismissed such assurances as disingenuous, and many Afghans have hidden in their homes, fearing harassment and violence.

Mr. Mujahid acknowledged that women would need a male guardian on journeys of three days or longer. He said that rumors that the Taliban would force women to stay in their homes or cover their faces were baseless, but he confirmed that music would not be allowed in public.

“Music is forbidden in Islam,” he said, “but we’re hoping that we can persuade people not to do such things.”

White House officials said on Wednesday that 90 U.S. and allied planes had flown out an estimated 19,200 people in a 24-hour period.

At least 500 were American citizens and their families, Mr. Blinken said, joining Afghans who were employees of the now-shuttered U.S. Embassy in Kabul and others who had worked for the American military and other government agencies, some since 2001, who qualify for a special immigration visa to live in the United States.

Congressional officials said earlier this week that the Biden administration had identified an estimated 50,000 Afghans who were eligible for the special visa. Former security forces, government officials and people who advocated women’s rights, the rule of law and other pillars of democracy also have been evacuated.

A new estimate from the Association of Wartime Allies released on Wednesday concluded that at least 250,000 Afghans — and perhaps more than a million — could be eligible for expedited immigration status. The advocacy group worked with American University to analyze employment contracts and other documents that those Afghans would need to prove their eligibility.

Mr. Blinken could not offer a more precise number, and noted the difficulty that even tracking down how many Americans might be in Afghanistan had been a challenge for the U.S. government.

He said the State Department had identified at least 6,000 Americans — many of them with dual Afghan citizenship — by searching various databases. Officials have sent more than 20,000 emails and placed 45,000 phone calls across Afghanistan to offer U.S. citizens a chance to leave, he said.

Thousands more American citizens may live in Afghanistan, but had not registered with the U.S. Embassy and otherwise could not be found, a senior State Department official later acknowledged.

Hours before Mr. Blinken spoke, lawmakers in Congress urged the Biden administration to extend the Aug. 31 deadline to ensure that all Americans and Afghan allies could leave Afghanistan safely.

“The reporting I’m getting on the ground are that our American citizens are trying to get out,” said Representative Michael McCaul of Texas, the top Republican on the House Foreign Affairs Committee. “Our Afghan partners and interpreters who served with our special forces, put their life on the line. We have a moral obligation to save them.”

Mr. Blinken would not discuss whether any semblance of the U.S. Embassy in Kabul — once one of the largest American diplomatic missions in the world — would remain open after the military exits next week. A small group of U.S. diplomats remain in Afghanistan, on a secure base at the airport in Kabul, to oversee the evacuation and continue negotiations with the Taliban.

As the evacuation mission played out, world leaders — and millions of Afghans — waited with anxiety to discern the true shape of Taliban rule.

During the group’s last turn in power, Afghan women risked being beaten, tortured or executed if they left their homes. In the two decades since American-led forces ousted the militants from power, many young women have come to expect basic rights.

In the first days after the Taliban seized Kabul, and national power, on Aug. 15, Afghan protesters have demanded that the militants accept their demands for greater freedom. Among the protests was a march by women demanding that their right to education and jobs not be harmed.

One activist, named Fariha, said she had taken part in the demonstration last week “to show the Taliban that they have to change, because we will not.”

“We cannot breathe if we are deprived of our rights to education and work, and if we are not present in the society,” she said through sobs.

“There are women who haven’t gone to Europe or the U.S. — they have stayed and are ready to fight until death,” she said. “We have worked hard for 20 years to gain education and work. We will not let anyone ignore us.”

Despite Taliban efforts to reassure Afghans of their safety, ominous signs suggest that they have not abandoned their brutal tactics. On Tuesday, the United Nations’ top human rights official cited “harrowing and credible” reports that the Taliban had executed civilians and noncombatant soldiers.

With the future of international aid to Afghanistan unclear, Chancellor Angela Merkel of Germany said on Wednesday that her country would maintain its support for the Afghan people after the U.S. troop withdrawal. She also called for talks with the Taliban.

“Our goal must be to preserve as much as possible what we have achieved in terms of changes in Afghanistan in the last 20 years,” Ms. Merkel told a session of Parliament convened to discuss the Taliban’s rapid takeover of Afghanistan. “This is something the international community must talk about with the Taliban.”

Germany pulled its last contingent of about 570 troops out of Afghanistan in June, but several hundred Germans were still engaged in development work funded by their government.

Adding to the concerns about Afghanistan is its foundering economy, which had been propped up for the past generation by American aid, but is now in free fall. Banks are closed. Cash is growing scarce, and food prices are rising. Fuel is becoming harder to find. Government services have stalled as civil servants avoid work, fearing retribution.

People trying to flee, if they make it past Taliban checkpoints, have been met with chaotic scenes at Kabul’s airport. At least seven Afghan civilians, including a toddler, have been trampled to death.

On Wednesday, the Taliban brought what looked like about 200 people to a fenced-off area, where they were crammed together under a beating afternoon sun.

John F. Kirby, the chief Pentagon spokesman, told reporters on Wednesday that American officers in Kabul, including Rear Adm. Peter G. Vasely, the top commander, and Maj. Gen. Christopher Donahue, the head of the 82nd Airborne Division, were talking to their Taliban counterparts every day to ensure safe passage of Americans and Afghan allies with proper credentials to flights leaving Kabul.

Still, there have been numerous reports of Afghans with proper paperwork being turned away at Taliban checkpoints and even at the airport gates, where some 30 U.S. consular officials and Marines are checking credentials. Throughout the past week, many gates have closed intermittently to clear backlogs.