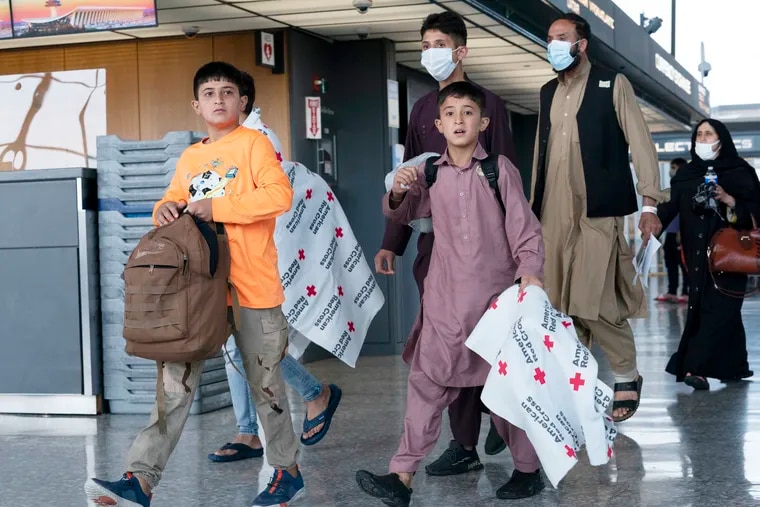 WASHINGTON — Hundreds of evacuees fleeing Afghanistan are expected to arrive this weekend at Philadelphia International Airport, the second airport in the nation enlisted by the Biden administration to receive people rescued from the violence that’s engulfed the country.

Two planes, each carrying 200 to 300 people, could land late Friday or early Saturday, according to a source familiar with the planning. A senior Biden administration official confirmed the airport would be the second, after Dulles International Airport outside Washington, to welcome people evacuated from Afghanistan. Dulles has accepted more than 8,600 people from the country this week.

“We are grateful to the city of Philadelphia for the use of their facilities and to everyone who played a role in setting this up so quickly,” said the administration official, who discussed the plans on the condition of anonymity. “In advance of their arrival, all individuals who are not American citizens and legal permanent residents will be screened and vetted by intelligence, law enforcement, and counterterrorism professionals, which includes reviews of both biographic and biometric data.”

All arrivals will also be tested for the coronavirus at the airport. They’ll be coming from other countries after leaving Afghanistan.

It wasn’t clear how many other flights with people from Afghanistan might be directed to the city.

The plan is for those who come through Philadelphia to be bused to a processing site in Camden. Many without clear immigration status could end up at South Jersey’s Joint Base McGuire-Dix-Lakehurst for further processing and resettlement. The base is one of four in the country so far housing people arriving from Afghanistan, along with others in Texas, Virginia, and Wisconsin.

The four bases have an initial capacity of 25,000 for the arrivals, according to the White House, but others could be added.

Those who make it to the United States will join an Afghan population of about 156,000, a smattering compared with the nearly 11.6 million immigrants from Mexico, or the 2.7 million from China and 2.4 million from India. About 700 Afghans live in Philadelphia, centered in Mayfair and Oxford Circle, two Northeast neighborhoods that have become increasingly diverse in recent years.

Still, rumors have circulated in Philadelphia humanitarian circles for weeks that the city could become a major welcome site. But plans didn’t solidify until recent days, with details confirmed only after a series of calls and emails among state, local, and federal officials Thursday.

In a statement late Thursday, Mayor Jim Kenney said Philadelphia “stands in solidarity with Afghan refugees and we look forward to providing them a safe haven in our Welcoming City.”

A spokesperson for the Kenney administration said the operation was led by the federal government, but added: “We stand ready to provide medical assistance, housing, and connection to our diverse community of immigrant service providers who can assist with an array of social services. “

Since the collapse of the country’s government in the last two weeks, about 25 Afghans have arrived in Philadelphia.

“I’m very proud of our city,” said Cathryn Miller-Wilson, executive director of HIAS Pennsylvania, one of the city’s two major resettlement agencies. “It is so clear we all need to step up, everyone. With this announcement, our city has done that.”

It’s also clear that resettling newcomers here will be complicated and difficult. Unlike refugees, who hold a specific legal status, some Afghans are being admitted under what’s called “humanitarian parole.” That status can be granted in emergencies to people who don’t have legal permission to enter the United States.

While it allows vulnerable Afghans to come here, it doesn’t provide permission to work, access to Medicaid health care, or certain other benefits, making it unclear how new arrivals will survive.

“We know it’s going to take a great deal of work, and community spirit and collaboration, to create a community for these new arrivals, and we encourage our neighbors to join us,” said Margaret O’Sullivan, executive director of Nationalities Service Center in Philadelphia.

Both HIAS Pennsylvania and NSC are collecting donations.