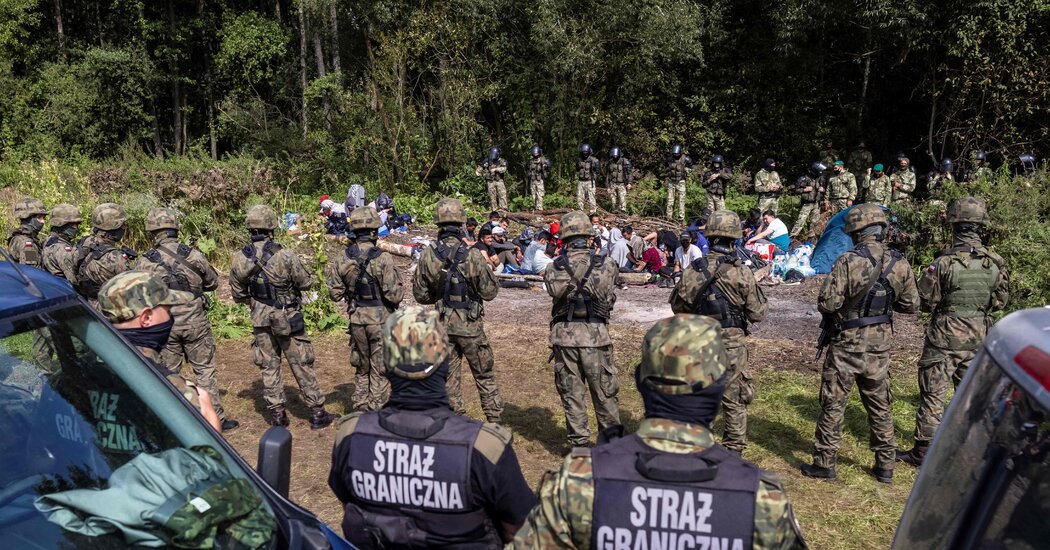 BRUSSELS — A standoff that has trapped Afghan asylum seekers on the border between Belarus and Poland is a telling example of the European Union’s dilemma over migration, especially acute now with the Taliban takeover of Afghanistan.

As E.U. member states worry about a new flow of migrants and asylum seekers from Afghanistan, they are accusing nonmember Belarus of using migrants as a weapon to destabilize the bloc and worry that Turkey could do the same, as it has done before.

The rapid Taliban takeover of Afghanistan less than two weeks ago has shocked Europe, which is still trying to absorb the more than one million asylum seekers and migrants who came in 2015, many of them driven by the horrors of war zones like Syria, Iraq and Afghanistan. European leaders have made it clear that this time, they intend to enforce Europe’s border controls and avoid a new migration crisis and the political backlash that could come with it.

Some 37 Afghan migrants, who left their country before the Taliban takeover earlier this month, have been stuck between the borders of Belarus and Poland for two weeks without easy access to food, water or toilets. Poland will not let them in and Belarus, which initially granted them visas, won’t let them return from the border.

Poland is a member of the Schengen Area — the passport-free zone that includes 26 countries — so the Polish border with Belarus is effectively the border of the European Union.

The issue has become politicized in Poland, with the ruling Law and Justice party, having lost its majority in Parliament, advertising its toughness on migrants. The government has sent troops to the area while building a variety of border fences.

Various opposition politicians in Poland, some of whom have visited the migrants, have criticized the inhumanity of the government’s position while trying to avoid being seen as in favor of a policy of open borders.

But for Ylva Johansson, the European commissioner for home affairs, the issue is what she sees as the weaponization of innocent migrants by the president of Belarus, Aleksandr G. Lukashenko.

“This area between the Poland and Belarus borders is not a migration issue, but part of the aggression of Lukashenko toward Poland, Lithuania and Latvia, with the aim to destabilize the E.U.,’’ she said in an interview.

“Lukashenko is using human beings in a terrible way,” she added. Having given them visas in Belarus and bringing them to the border, Belarus will now not let them leave, she said.

Mr. Lukashenko has done the same thing on the borders of Lithuania and Latvia, apparently to retaliate against the European Union for its increasingly harsh sanctions against him and his government over fraudulent elections and a fierce crackdown on the opposition.

That crackdown went as far as the state hijacking of a civilian flight between Greece and Lithuania to capture a young dissident, Roman Protasevich, and his girlfriend, Sofia Sapega.

“We have a person in a neighboring country who is worse and worse, denying free and fair elections, using violence, forcing down a passenger plane between two member states and now using innocent people from third countries,” Ms. Johansson said.

Still, she said, the “situation is not sustainable, and at the end of the day, they are human beings.”

Belarus has denied that it is using migrants as a weapon against the European Union.

After visiting the border on Tuesday, Mateusz Morawiecki, the Polish prime minister, said that “this is an effort to create a pan-European migration crisis by the regime of Alexandr Lukashenko.”

The same day, Belarus accused Poland, as a member of the U.S.-led coalition in Afghanistan, of deliberately provoking migrant flows from there, according to the state-run Belta news agency. It blamed the breakdown in border cooperation on the European Union.

Also on Tuesday, the U.N. High Commissioner for Refugees called on Poland to abide by its international obligations.

“While we acknowledge the challenges posed by recent arrivals to Poland, we call on the Polish authorities to provide access to territory, immediate medical assistance, legal advice, and psychosocial support to these people,” the agency said.

Separately, the European Court of Human Rights, which is independent of the European Union, has asked the Polish and Latvian governments to intervene to help the migrants on the Belarus border. There is another group of about 40 migrants, mostly Iraqi, who are similarly stuck on the border between Belarus and Latvia.

The court was responding to a request from Polish charities, including the Ocalenie Foundation, which said on Wednesday that 12 of the Afghan migrants were seriously ill and 25 others were unwell.

The larger concern for the European Union is to avoid a repeat of the 2015 migration crisis, which split the bloc and boosted far-right politicians across Europe.

European leaders like Charles Michel, president of the European Council, have vowed to protect the borders.

“We are determined to keep migratory flows under control and the E.U.’s borders protected,” he said after a Group of 7 emergency meeting on Afghanistan on Tuesday.

Ms. Johansson said that “we have learned the lesson from 2015 so that we will not see a new migration crisis in the European Union.” Europe cannot wait until Afghan refugees are knocking on the borders, she added, confirming her statements this week to Euronews.

That means providing money and assistance to transit countries neighboring Afghanistan, much as the European Union already does for Turkey to help it pay for hosting more than 4 million migrants and asylum seekers.

The European Union has also accused Turkey of using migrants in the spring of 2020, sending them toward Greece to try to pressure the European Union to keep its promises on visa-free travel to the bloc and subsidies.

In response, Greece has now built a 25-mile border wall with Turkey, finished just a few days ago, and has been accused of illegal pushbacks of refugee boats while continuing to blame Turkey for not fully patrolling its seas and stopping migrants from trying to reach Greece.

While some E.U. countries have promised to take in Afghan refugees, others say they will not. Ms. Johansson said she expects the European Union and the United States to raise their resettlement pledges for Afghans, as Canada and Britain have already done.

Ms. Johansson is scheduled to travel to Washington on Friday to discuss migration and resettlement with the secretary of homeland security, Alejandro Mayorkas, building on the work of a July resettlement forum that involved the United States, Canada, the European Union and the United Nations. The intention is to work jointly to provide safe passage and resettlement for refugees, more crucial than ever now, she said.

“The immediate need is to step up the numbers from Afghanistan since Afghans both inside and outside the country need international protection,” she said. “I have no illusions about the Taliban. I know what they’re capable of, and we need to discuss how we can support all those Afghans internally displaced, a huge majority of them women and children, and how we can support neighboring countries already hosting a large number of Afghans.’’