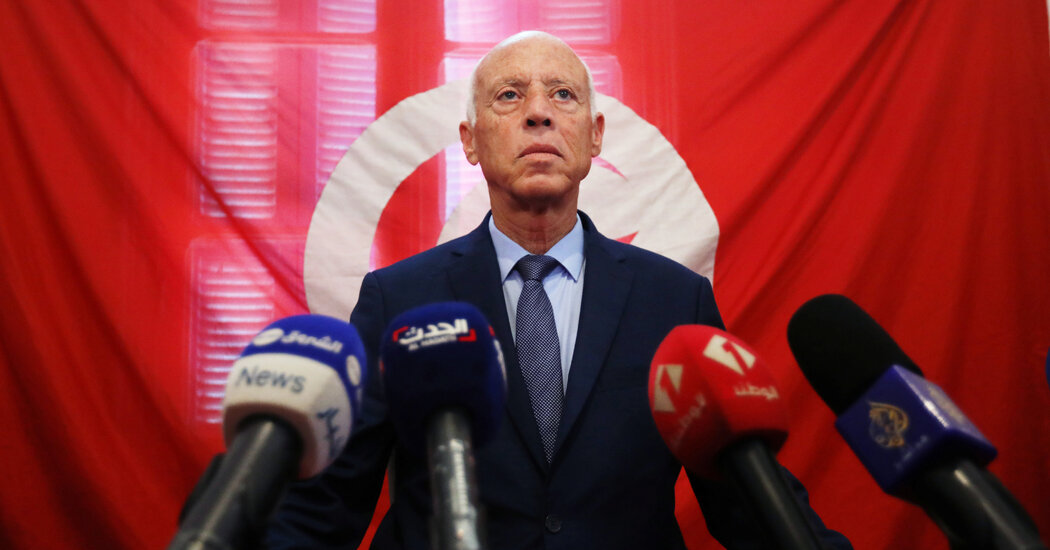 TUNIS — Year after year, the man now accused of trashing Tunisia’s Constitution sat straight-backed in a suit and tie at the front of a university lecture hall, his notes on constitutional law tidy in front of him, his Day 1 warning to students ensuring pin-drop silence:

“I was taken aback at first,” recalled Fadoua El Ouni, who took Kais Saied’s constitutional law course her first year at Carthage University. “Like, are all university courses going to be like this?”

They were not. Mr. Saied was semilegendary on campus for mesmerizing classrooms with his deep, ringing voice, his speech so starched and archaic that when Ms. El Ouni first heard him converse in everyday Tunisian dialect, it was, she said, an “out-of-body experience.”

Since Mr. Saied suspended Parliament and fired his own prime minister last month amid mass protests over unchecked poverty, corruption and the coronavirus, Tunisians have puzzled over the contradictions:

How a political novice whose severe bearing and formal style earned him the nickname “RoboCop” became so beloved among the young that Facebook fan pages sprang up crediting him with sage utterances he had never uttered.

How a law professor who preached strict adherence to the Constitution and practiced such personal rigor that he almost never missed a day of work stretched the law to justify seizing power.

Most of all, they have argued over whether his power grab makes him a populist hero or a dangerous demagogue, whether he will save the last standing democracy to emerge from the Arab Spring or destroy it.

Those who know him see evidence of both: an uncompromising ideologue unwilling to listen to others, yet one who lives modestly, shows compassion for the poor and insists that his goal is simply to wrench power from corrupt elites.

“His supporters see in him the last, best hope to achieve the goals of the revolution that were never realized,” said Monica Marks, a Middle East politics professor at New York University Abu Dhabi. “But we know clean people who genuinely want to achieve good aims can sometimes turn into people who chop off heads.”

By all accounts, Mr. Saied, a longtime law professor, is not the type to order up a pet tiger or serve guests frozen yogurt flown in from St. Tropez, as did the family of Zine el-Abidine Ben Ali, Tunisia’s former dictator. His personal habits run more toward coffee shops with plastic chairs and the middle-class neighborhood where he has lived with his wife and three children, even after his election to the presidency in 2019.

It is not personal ambition that drives him, he has said, but a sense of responsibility and religious duty to return power to the youth and the poor who ignited Tunisia’s 2011 revolution. In obedience to their will, he has said, he aims to guarantee education, health care and decent lives and to purge Tunisia of corruption.

“I am running against my own will,” Mr. Saied told an interviewer during his presidential campaign. “God says, ‘Warfare is obligatory for you, though it is hateful to you.’ Responsibility is a hateful thing. It is like a soldier standing on the front. He does not want to kill, but has been ordained to battle.”

Mr. Saied’s office did not respond to a request for an interview.

A devout Muslim, Mr. Saied has described his presidency as “ibtilaa,” an Arabic word meaning a test assigned by God that cannot be refused.

“He’s saying he’s doing it because he has to do it, because people want him to do it,” said Mohamed-Dhia Hammami, a Syracuse University-based Tunisian political researcher. “The idea in Islam is that everyone goes through some sort of ibtilaa. In his case, it’s being the president.”

All of which may sound like grandiloquent cover for demagogy. But even his critics say his convictions are sincere, rooted in faith and genuine concern for the poor.

Mr. Saied, who was born to a family of mixed class in Tunis — his mother had aristocratic connections, his father’s background was modest — entered the national stage in 2011, after the first revolutionary protests had died down and Mr. Ben Ali had fled the country.

When protesters from marginalized regions mounted mass sit-ins in Tunis to demand more sweeping changes, Mr. Saied was one of the few establishment figures to show up in solidarity. Videos of his visits were soon all over Facebook.

As a new Constitution was drafted, Mr. Saied, though serving on an advisory committee, was not granted one of the pens.

The exclusion clearly grated. Tunisian television often featured his commentary, which was consistent: The new Constitution over-favored Parliament. Voters would be stuck choosing among electoral lists promoted by political parties who cared only about power. Tunisians would feel more invested in their democracy if they elected representatives they knew personally.

His prescription was a ground-up, top-down political system, in which power would flow up from hundreds of directly elected local councils and down from a strong president.

If the idea seemed divorced from reality, he was unmoved. One activist who got to know the professor during the democratic transition recalled that while he was modest and generous, arguing with him was useless. (Most people interviewed requested anonymity to speak about the president, given the highly charged political climate.)

For many Tunisians, however, he was must-watch TV. It was like “he was dictating the absolute truth about what the Constitution should be,” said Amna Guellali, Amnesty International’s deputy regional director for the Middle East and North Africa. “Like a prophet’s voice. Something that goes beyond human.”

Enamored of his austere authority, a quality that grew only more appealing as corruption scandals dominated the news and the economy worsened, Tunisians soon set up Facebook pages urging him to run for president.

The story of his run is by now famous in Tunisia: The slogan “the people want,” echoing the chants of the 2011 revolution; the campaign volunteers who showed up without his even asking; the campaign financing limited, he insisted, to what he had in his wallet; the aura of incorruptibility, despite scattered reports of foreign funding; the lopsided runoff victory.

“Sovereignty belongs to the people,” he told an interviewer at the time. “Everything must start from them.”

He later said that he changed his mind about the presidency after a poor man approached him in tears, imploring him to run — a moment he compared to a religious vision.

It would not be the last such interaction. Videos frequently circulate online of Mr. Saied embracing impoverished protesters at the presidential palace or stopping to greet ordinary Tunisians in the street.

“That’s what people don’t find in other politicians,” said Imen Neffati, a Tunisia researcher at Oxford University. “He stands out, because the majority of them don’t really care.”

Critics dismissed him as just a law professor who, they were quick to point out, never finished his Ph.D. Others decried his social views: He supports the death penalty, opposes equal inheritance for men and women and has criticized open homosexuality. Those who “seek to spread homosexuality,” he has said, are part of a foreign plot.

One characteristic all agree on is his firmness. A European ambassador and informal adviser said he insists he will never negotiate with corrupt politicians or parties which, for him, rules out the party that dominates Parliament, Ennahda, as well as most of Tunisia’s business and political elite.

Diplomats say every meeting at the presidential palace is a lecture, not a dialogue. Advisers say he listens to few, among them his wife.

Since July 25, Mr. Saied’s security forces have placed dozens of judges, politicians and businessmen under travel bans and others under house arrest without due process, raising concern, even among supporters, that he is veering toward autocracy.

On Tuesday, his office announced that the 30-day period he had originally set for his “exceptional measures” would be extended — for how long, it did not say.

He is widely expected to try to change Tunisia’s electoral system and amend its Constitution to enlarge presidential powers. Though he had promised to appoint a new prime minister by Tuesday, Tarek Kahlaoui, a Tunisian political analyst, said he had been told by presidential advisers that Mr. Saied envisioned the position as more of a “manager” than a true head of government.

In justifying his power grab, Mr. Saied cited Article 80 of the Constitution, which grants the president broad emergency powers in case of imminent danger to the country. But constitutional experts said his move violated the provision, in part because it requires Parliament to remain in session.

For all his legal precision, several people who know him said, Mr. Saied often operates on emotion and instinct.

“He feels that he’s been chosen by the people,” Mr. Kahlaoui said. “People went into the streets, and it was time for him to act.”