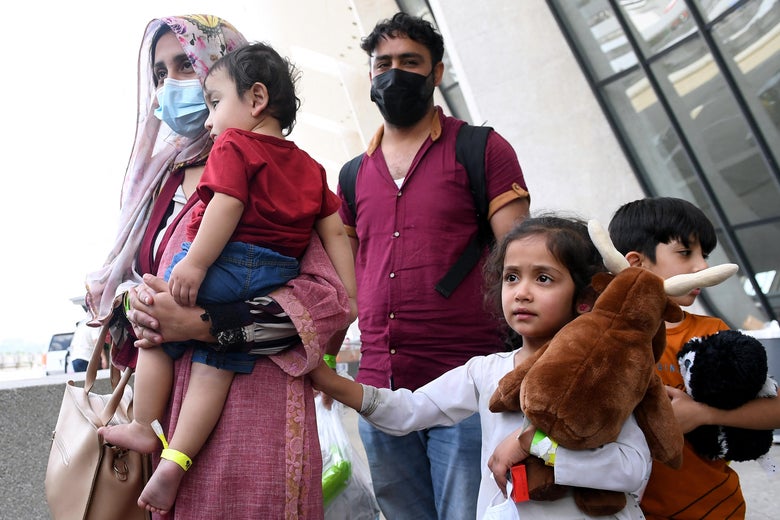 The Biden administration recently announced that the U.S. would eventually accept as many 50,000 Afghan refugees, and after the events in Afghanistan of the past several weeks, many are wondering if that’s even possible. Suzy Cop, the executive director of the International Rescue Committee’s Dallas office, is feeling prepared for her organization’s small piece of that effort. When we spoke this week, she told me she’s gearing up to welcome and settle as many Afghan refugees as she can.

Texas has had a complicated relationship with refugee programs in recent years: It’s reportedly taken in more refugees than any other state in the past decade. But amid the Syrian refugee crisis in 2016, Republican Gov. Greg Abbott sued the federal government under then-President Obama to prevent any more refugees from resettling in his state, and in 2020, he refused to participate in the refugee resettlement program—even after 40 other governors, many of them Republicans, pledged to do their part.

This time, nationally, some Republican lawmakers and pundits have sought to make the coming Afghan refugee influx a political broadside. On Fox News, Tucker Carlson, quipped to his viewers, “So first we invade, and then we are invaded.” Despite this, GOP Texas Sen. John Cornyn announced that his state is prepared to accept as many as 10,000 Afghan refugees with SIV visas, and they will begin arriving soon. I called Cop in Dallas to understand what the process will look like, whether the current right-wing rhetoric will complicate her efforts, and how locals in Texas are really reacting. Our conversation has been condensed and edited for clarity.

Aymann Ismail: Can you first walk me through how this refugee resettlement will work?

Suzy Cop: The refugee resettlement process starts usually overseas with processing, vetting, all the medical checks, and all that kind of stuff. And once someone is approved, there’s a whole process for getting a case to an organization like ours. We work closely with our HQ office in getting cases to us, and we work locally on cases with people who have U.S. ties—who have either family or friends here. And once we’re assigned a case, we prep for their arrival. That’s kind of it in a nutshell. Obviously, there’s a lot more involved overseas that others can speak to. The whole process that usually takes forever, but in situations like this, it goes a little faster because of the emergency.

What will you be doing for the coming Afghan refugees?

I oversee the Dallas office, and I work closely with our staff in receiving refugees. We make sure that refugees go through our settlement, reception, and placement programs. I also work with the community, and coordinate with the state. I’ve been working with IRC for 20 some years, pretty much in a similar or same role in those 20 years, and I’m just trying to keep our work going so that we’re ready for receiving these families and individuals. And once they arrive here, making sure that we have everything pre-prepared for them. Once they are here, we get them additional medical screenings, kids get enrolled in schools, and we help families to receive their cash assistance and other public benefits that they’re able to get. We’ll just usher that all in with them and try to get them employment opportunities and jobs skill training, and get them back on their feet.

How are Texans responding to the influx of refugees in their areas, especially with the Afghan crisis?

I’ve been amazed at just the sheer outreach that we’ve gotten so far from our community here in Dallas. Folks are just calling up and asking us what kind of assistance they can provide. It’s amazing because everybody wants to be a part of it. If it’s any monetary assistance, that’s great. If it’s providing any kind of donations, volunteering with us, some folks have language capabilities, and sometimes that’s how you get into it, too. We’ve had plenty of folks willing to open up their homes. And we’ve had folks who have their own Airbnbs who are also willing to provide those. We’ve been getting special immigrant visa recipients from Afghanistan for a while now, and I think this emergency has people just reaching out even more.

The Biden administration reportedly told refugee aid groups to prepare to resettle 50,000 Afghan refugees. What are the challenges in bringing so many people in?

Well, we’ve done that in the past. It’s not the first time that the U.S. has been able to resettle that many folks. The IRC Dallas office was created 46 years ago in response to the influx of Vietnamese refugees, and the willingness of communities to accept them. We had the same thing happen in South Florida with Cubans coming in, and that was even more than 50,000. So it’s feasible to do. And we have agencies like the IRC that are there to support folks and respond to that challenge. Everything’s a challenge. But I think we are ready for that challenge. And I think it’s the right thing to do, to be able to open up our offices and our businesses and provide any kind of support that we can through the resettlement program.

We are working with a team of caseworkers and logistics folks and prepping our staff. We also have a large number of folks who volunteer and intern with us. And we work very closely with prepping the school system if there’s a lot of children that will be coming in that will have to get an assessment and go through school enrollments. And we also work very closely with health clinics, so these are regular consultations we have, and everybody’s getting prepared for whatever numbers that we end up getting.

My head is spinning. Are you exhausted?

No! It’s a great feeling to be a part of it. Of course it’s tiring at times, but it’s the same as any kind of work where all of a sudden you’re doing a little bit more than you would normally. This is our job. This is what we’re here for. We just want to be able to get them through this tough time. In our office, we have an on-site mental health program to support folks as they’re coming in. We have a real one-stop shop. And we have other resettlement agencies in the community as well that we partner with. It’s a joint effort. 46 years is a pretty long time to be doing this kind of work, and we feel prepared for whatever gets sent our way.

Over the last decade, Texas has resettled more refugees than any other state in the country. Do you anticipate taking in more Afghan refugees during this wave as well? Why Texas?

It really depends on how the cards play out. The way that they’re distributed is up to the folks who want to come to Dallas and have some connection to Texas. Texas has always been in the top five for years. We are at the Dallas office, and we might see some folks end up in Houston and other location as well.

People come to Texas for different reasons. They might have some family here. Certain states are just kind of magnets for refugees. It’s about having a receptive and established community. You have some new areas of resettlement across the country that are also willing and welcoming for folks to come. They might not have the largest number of folks coming there, but that’s because there’s other things that are taken into account, like the sheer capacity of the cities and other services that are in the city that make it practical for large numbers to come in.

In the current situation, it’s become a right-wing talking point that we’re bringing in too many people. A guest on Tucker Carlson’s show suggested that refugees will “blow up” American malls after being resettled here. What do you make of those types of claims?

Based on most experiences that I’ve had, Dallas been a very welcoming community. Folks who do actually get to know refugees think differently. They know that they’re just human beings, moms and dads and individuals, sons and daughters who want to have a better and more peaceful life. And they come here for that reason. What they’ve gone through in their home countries, becoming a refugee is not a choice that they’re making. For some, it’s a matter of life and death. And when people realize that and get to know folks, they’ve welcomed them to the states. They just can’t see any other reason why they wouldn’t be here.

Do you interact with the fear that rhetoric represents in people at all?

I don’t see it here on the ground and haven’t heard it from folks. I’ve heard the opposite when people have met refugees. They’re hard workers, they’ve gone through a lot, they persevere, and they want the same hopes and dreams for themselves and for their families as the rest of us. And so once people see that, it’s a totally different mindset that they get into. That initial fear is just because they haven’t come in contact with someone before. It’s something that disappears when they confront someone and see them how they are.

There’s some confusion over whether or not refugees can be properly vetted with the rapidly evolving situation right now. Do you find that to be true?

I can just say that the process for vetting is a long, excruciating process. There are so many agencies that are involved with it. Refugees who are coming here really are the most vetted of any immigrants that are coming to the United States. It’s just unfortunate that it takes something like this kind of an emergency for people to talk about it. We’ve been settling Afghan refugees for 15 years, especially after the special immigrant visa recipients bill was passed by Congress. The program was established in Congress in 2006. So, it’s been going on for years. It always takes an emergency for it to become news, and then all of a sudden people are like, “Oh my gosh, I can’t believe this is happening!” But it’s been happening. It’s just that right now it’s become like a more of an emergency situation.

It seems the fearmongering about this that I’ve seen comes down to, “They’re going to bring in an un-American way of life.” You’ve been doing this a long time. Plainly speaking, do Texans have anything to fear?

No. We’ve all been doing this for a very long time. We’ve served so far this year about 12 different populations from 12 different countries, and our programs of integration are helping all of them across the board with respect to their culture and everything. That has not been an issue that we have to worry about. We provide cultural orientation upon arrival, but also throughout their period with us, through all of our different programs. These folks also have communities here in Dallas that have that support for them as well. Most of them become U.S. citizens within five years, and are very grateful to be able to do that. We try and make sure that we’re providing them the support to integrate, but I think it’s important that they keep their culture. I come from an immigrant family, and I still respect what my folks went through. I’m a first-generation American, and I still respect my own culture from my parents and my grandparents. I speak the language and everything. But also, I’m an American. So it’s a combination basically, and I think that’s really important to keep and to have respect for. There might be things that as they go through life feel more American than something they’re used to, but in general, there’s no problem with that down the road.

Sorgente articolo:
When Thousands of Afghan Refugees Show Up in Texas – Slate