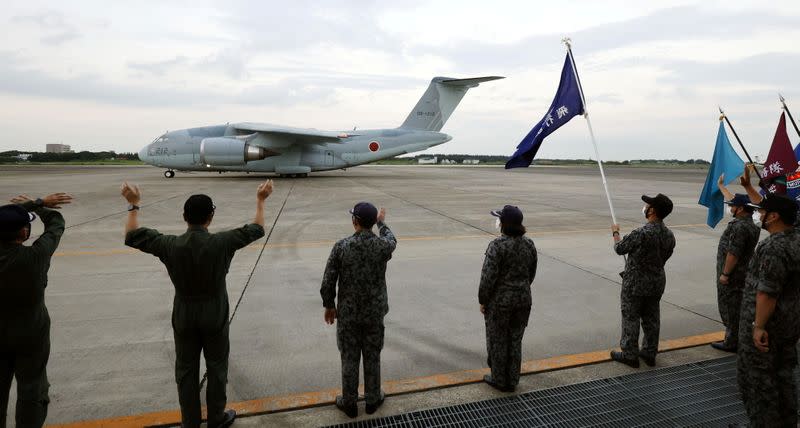 TOKYO (Reuters) – Japanese military planes assigned to evacuate Japanese nationals from Afghanistan are now in a nearby country but moving them from Kabul airport does not mean Japan is ending its evacuation operation, Japanese government officials said on Saturday.

They also told a media briefing that Kabul airport needed to be firmly secured for planes to return to continue the mission, which also targets Afghans who worked at the Japanese embassy and at the local office of a Japanese aid agency.

Japan this week dispatched three military transport airplanes and a government-owned passenger plane for the operation.

The briefing came after a report by public broadcaster NHK that one Japanese national managed to reach the airport on Friday and was flown to Pakistan, and that Japanese Self-Defence Force personnel also left Afghanistan as well.

“Upon considering the local situation and relevant countries’ movement, we’ve decided to move our personnel in Afghanistan to a nearby country temporarily,” a foreign ministry official said.

“We will continue to do our utmost to ensure safety of Japanese nationals and local staff, and to provide assistance for their evacuation.”

An Islamic State suicide bombing killed at least 92 people, including 13 U.S. Marines, just outside Kabul airport on Thursday, and the White House said https://www.reuters.com/world/asia-pacific/western-nations-race-complete-afghan-evacuation-deadline-looms-2021-08-25 the next few days of an evacuation operation were likely to be the most dangerous.