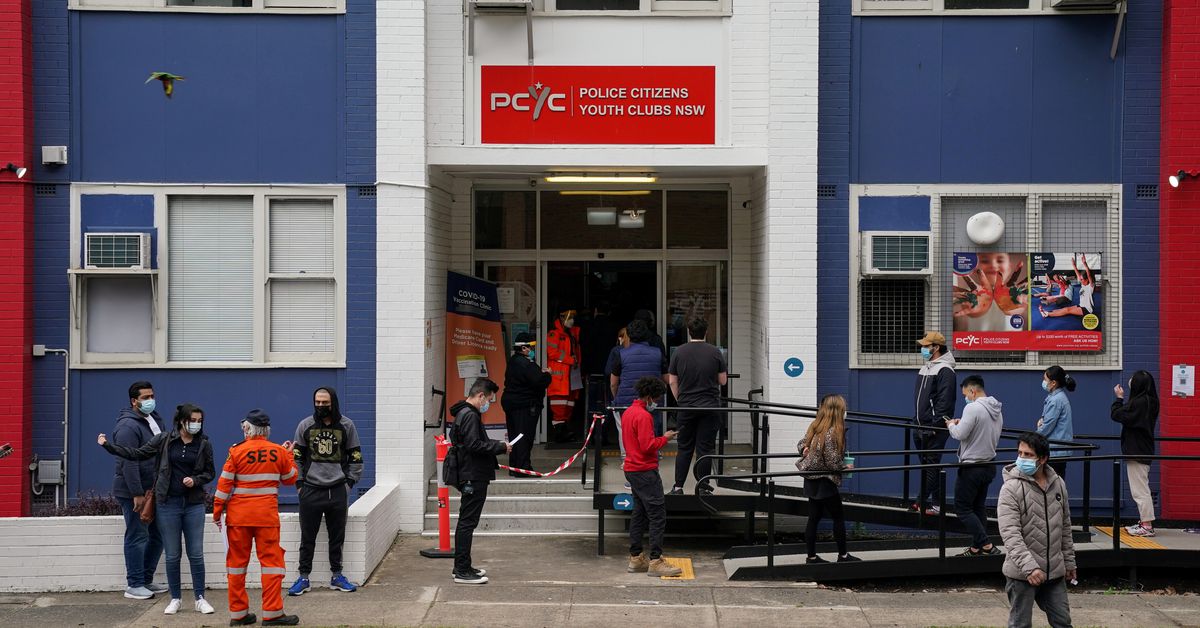 SYDNEY, Aug 27 (Reuters) – Sydney’s COVID-19 cases slightly eased on Friday but still hovered near record levels as the Australian federal government looks to press states to stick to a national reopening plan once the country reaches a 70%-80% vaccination rate.

The national cabinet, a group of federal and state leaders, will meet later in the day against a backdrop of concerns by some states given the persistently high daily infections in Sydney even after two months under lockdown.

New South Wales recorded 882 new cases, most of them in state capital Sydney, down from the record 1,029 on Thursday as officials struggle to quell the Delta outbreak.

Two new deaths were reported, while 117 people are in intensive care, 103 of them unvaccinated.

Even as infections surge, state authorities revealed a staggered back-to-school plan from late October, when they expect its vaccination rate to hit 70% from 32% now.

New South Wales Premier Gladys Berejiklian said she would be focussing more on vaccination rates and the number of hospitalisations rather than daily case numbers as the rollout picks up speed.

“They are the two things that will matter even when we start to live life more freely at 70% and then obviously at 80% … we are starting to make that mind change in New South Wales,” Berejiklian said during a televised media conference.

A national reopening plan was agreed between leaders of Australia’s eight states and territories and the federal government last month, when Sydney cases were much lower, but virus-free Queensland and Western Australia have hinted they may not follow it. read more

More than half of all Australians are under strict stay-at-home orders as Sydney and Melbourne, its largest cities, and capital Canberra, battle outbreaks of the highly contagious Delta variant.

The lockdowns are hitting economic activity with some economists predicting Australia’s A$2 trillion ($1.45 trillion) economy on the brink of a second recession in as many years as data on Friday showed a plunge in July retail sales. read more

In Victoria state, officials detected 79 new local cases, down from 80 cases on Thursday. Of the new cases, 26 are mystery cases – those whose source is unknown – raising prospects of an extension to the lockdown beyond Sept. 2.

With some 48,600 cases and 991 deaths, Australia has kept its coronavirus numbers relatively low. Officials expect fewer deaths from the latest flare-up versus last year as vaccination rates rise.

So far, 32% of people above 16 has been fully vaccinated and based on current rates, Australia should hit 80% by mid-November. Australia’s expert vaccination panel on Friday approved the use of vaccines for children aged 12-15.