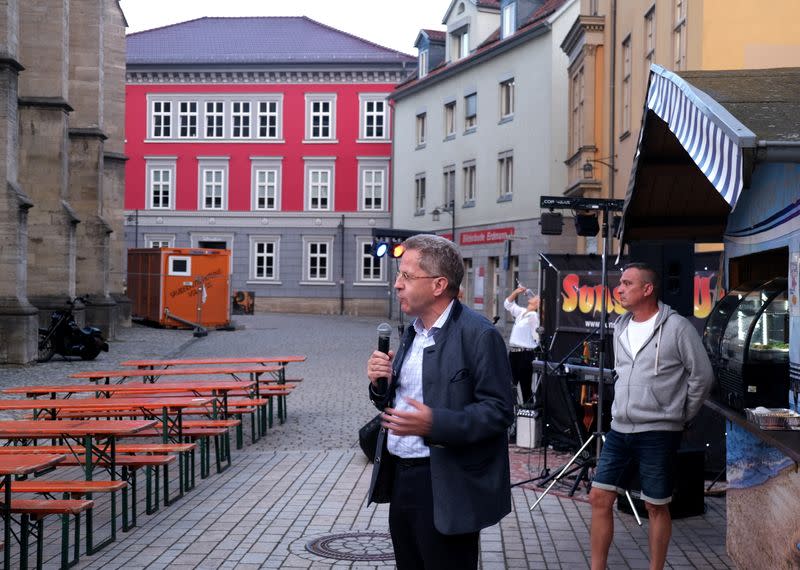 MEININGEN, Germany (Reuters) – Germany’s ruling conservatives will have a hidden weapon in their campaign to remain in office when Angela Merkel calls time on 16 years as chancellor next month – a right-winger who many of them are however reluctant to call their own.

Hans-Georg Maassen was head of domestic intelligence – effectively Germany’s top neo-Nazi hunter – until he was forced to resign in 2018 after being accused of ignoring video evidence of far-right gangs chasing immigrants during riots in the east.

He had since reinvented himself as a Merkel critic and, in September’s federal election, will contest a seat in deepest eastern Germany on a pledge to pull in right-wing voters beyond the reach of the conservatives’ struggling candidate for chancellor, Armin Laschet.

“I have supporters from everywhere,” Maassen said a week ago as he sipped a beer with campaign activists on Meiningen’s medieval square, giving off a professorial air in spectacles with penny-sized lenses. “Laschet needs that.”

His campaign team endorses that assessment.

One, a Berlin social worker, signed up with Maassen, a critic of immigration, because she said the anti-Islamist radicalisation programmes she had worked on “glorified the left”.

Another, a human resources director, admired the Merkel who had been tough on Greece’s debts during the euro zone crisis, but thought it “all went off the rails in 2015” when she allowed a million refugees into Germany – a trope that has gained traction with the West’s chaotic retreat from Afghanistan.

As a centrist, much of four-time election winner Merkel’s success story was built on her ability to unite liberals and traditionalists within her party.

Laschet has positioned himself as a centrist too.

But both he and the CDU party he took over from Merkel are struggling badly in the polls, making him reluctant to distance himself from Maassen, a man anathema not just to the centre-left Social Democrats (SPD) and Greens to whom Laschet is leaching votes, but also to the CDU’s more liberal wing.

One CDU official, speaking on condition of anonymity, said the party would have preferred a more “reasonable” candidate in Meiningen.

Maassen was selected by the handful of members in the local party chapter to run in that constituency. He was never endorsed by party headquarters and is not on any national or regional candidate lists.

But with the SPD polling ahead of the conservatives in one recent poll for the first time since 2006, Laschet’s need for reinforcements – even a man he has thus far steered clear of associating directly with – is growing more acute.

A spokesperson for the CDU leader told Reuters that Laschet did not comment on individual candidates and that, while he would be campaigning next week in Thuringia, the region where Meiningen is located, he would not take to the stump in Maassen’s constituency.

After Maassen left his job as head of the Federal Office for the Protection of the Constitution, he wrote an article criticising Merkel’s immigration policy and accusing “economic globalists” of undermining national cultures.

A fellow anti-extremism officer accused him of using anti-Semitic codewords in the piece, a charge that Maassen vehemently denies.

The region in which he is contesting a seat, one of thickly forested rolling hills, is a heartland of the anti-immigration Alternative for Germany party – but also a source of voters who will not desert the conservatives for parties on the left.

During last week’s constituency visit, Maassen told a crowd in Meiningen square that NATO’s Afghan retreat could trigger a repeat of the 2015 refugee influx.

“I am fearful when I look at what is coming in Germany. I’m scared our immigration policy will repeat itself,” he said.

Earlier, over beers, he laughed as he showed an Afghanistan news alert that popped up on his phone in which NATO foreign ministers appealed for the Taliban to respect human rights. The appeal was a sign of the West’s impotence, he and the activists agreed.

“We should have left the country earlier, and in a better way,” he later told the crowd, to applause. A poll on Friday showed 80% of Germans expect more refugees to come as a result of the Afghanistan crisis.

In May, Laschet declined to answer directly when challenged by youth climate activist Luisa Neubauer on television on why he refused to condemn a man who she said was “undermining democracy” by “providing cover” for “anti-Semitic, anti-science” ideas.

Maassen’s nomination was a matter for the local party and “nobody has ever said Mr Maassen is an anti-Semite,” Laschet said, adding that, if he were, that would be a red line.