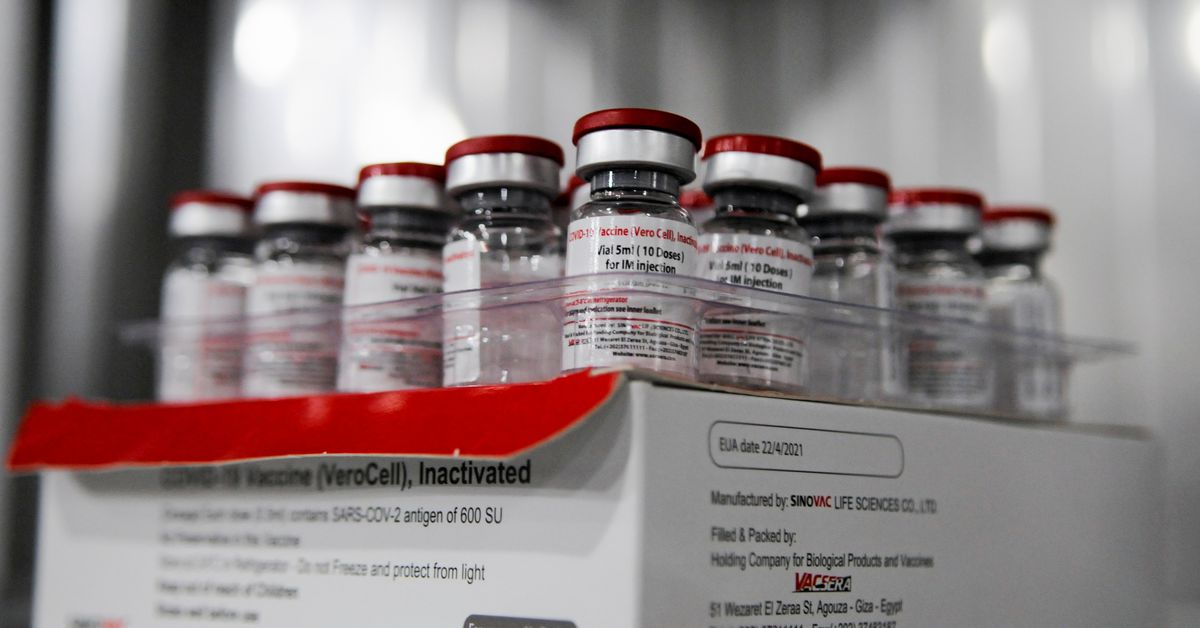 BRUSSELS/JOHANNESBURG/JAKARTA, Aug 26 (Reuters) – The World Health Organization’s pandemic programme plans to ship 100 million doses of the Sinovac (SVA.O) and Sinopharm COVID-19 shots by the end of next month, mostly to Africa and Asia, in its first delivery of Chinese vaccines, a WHO document shows.

The Chinese shipments will help the sputtering global COVAX vaccine sharing programme which is far behind its pledge to deliver 2 billion doses this year following supply problems and export curbs imposed by major producer India.

It could also boost Beijing’s vaccine diplomacy efforts despite concerns over the efficacy of the Chinese shots, which have been turned down or paired with boosters from Western manufacturers by some of the recipient countries.

Of the 100 million Chinese vaccines, half will be provided by Sinopharm and half by Sinovac, with deliveries planned for “July to September 2021”, a WHO document dated July 29 says.

About 10 million Sinopharm shots had been shipped by mid-August, a spokesperson for the Global Alliance for Vaccines and Immunization (GAVI), which co-leads COVAX along with the WHO, told Reuters.

Sinopharm, Sinovac and China’s trade ministry did not respond to requests for comment about when the Chinese vaccines would be delivered.

The Chinese vaccines have been allocated to 60 countries, mostly in Africa, which is expected to receive a third of the 100 million doses.

However, not all countries want the Chinese vaccines.

South Africa is listed by COVAX as one of Africa’s largest recipients of Chinese shots with an allocation of 2.5 million Sinovac doses, but a senior health official told Reuters the country was currently unable to accept the vaccines.

“There is not enough information on effectiveness against the Delta variant and there is no data on Sinovac in populations with HIV,” said Nicholas Crisp, a deputy director-general in the health department who is overseeing the vaccine rollout.

“We have not accepted the COVAX Sinovac because it is premature in our evaluation and planning process,” he told Reuters.

Sinovac did not immediately respond to a request for comment about South Africa’s stance.

Nigeria, the main recipient of Chinese shots in Africa under COVAX with an allocation of nearly 8 million Sinopharm doses, has approved that vaccine but has called it a “potential” option for the country’s inoculation campaign.

A GAVI spokesperson declined to comment on South Africa and Nigeria and noted that other countries had not been included in this round, with one of the reasons being that some had decided not to receive the Sinopharm and Sinovac vaccines.

Officials from Kenya, Rwanda, Togo and Somalia, which are entitled to smaller COVAX shipments, said they had no concerns about the Chinese shots because they had been vetted by the WHO and more people needed to be inoculated as soon as possible.

COVAX’s allocation of Chinese vaccines comes after the WHO gave emergency approval to the Sinopharm shot in May and Sinovac in June. GAVI has secured a combined supply of up to 550 million vaccines from the two companies until next year.

Including the Chinese vaccines, the facility expects to deliver about 500 million doses by the end of September, its latest forecast shows. It has so far shipped 215 million vaccines, mostly AstraZeneca’s (AZN.L). read more

Ukraine is the only country in Europe on the COVAX list for Chinese shots and is set to receive about 160,000 Sinovac doses.

Asian countries are expected to receive more than 25 million Chinese vaccines, of which nearly 11 million Sinovac doses would go to Indonesia, making it the largest recipient of Chinese shots through COVAX. Other vaccines will go to countries in Latin America and the Middle East.

Indonesia has decided to give boosters, largely with the Moderna (MRNA.O) vaccine, to healthcare workers – who have mostly been immunised with Sinovac shots.

That mirrored similar moves in other countries that have deployed Sinovac shots, such as Brazil and Chile.

Healthcare workers are a small portion of those vaccinated in Indonesia, but the booster policy has been interpreted by many as a sign of decreasing confidence in Sinovac.

Asked why Indonesia was buying the vaccine, of which the country is a major recipient also through bilateral deals, an official at the Indonesian health ministry told Reuters: “Sinovac could assure us of the amount they could deliver.”