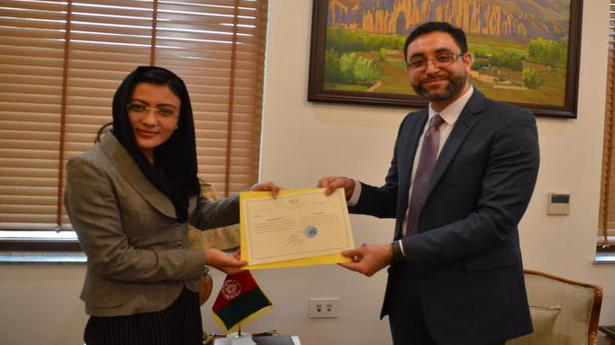 With visas cancelled amid a volatile political situation, the MEA has sought clarity from the MHA

It has been a month since 27-year-old Shafiq Sultan spoke to his family, but what is troubling him even more is the silence from the Indian government about the future of thousands of Afghan scholars like him.

Mr. Sultan, who worked formerly for the Afghan government in the Customs Department, received the prestigious Indian Council of Cultural Relations (ICCR) scholarship to pursue his Master’s degree at Delhi’s Jawaharlal Nehru University (JNU), as part of a programme launched by the Ministry of External Affairs in 2005, and has applied for a doctoral degree (PhD). However, he has received no response from the government about whether his visa and the stipend provided by the ICCR for his living expenses would be continued.

“At this point, if I return to my country, there is no doubt that I will be killed within a day. The Taliban have access to all kinds of database and they are literally going door-to-door,” Mr. Sultan told The Hindu, adding that he hopes the government will consider giving him a “new life” by accepting his plea to let him and around 400 other students, who graduated in August, to stay on and continue their studies.

About 800 students who were awarded the scholarship for the new term beginning in August are also waiting to hear about their visas to begin their degrees at various colleges and universities in India. Some had applied for the visas already, at the Indian Embassy in Kabul. The Hindu had reported earlier on the plight of those whose passports are either still stuck at the embassy or visa centre, or been misplaced or stolen, and last week, the MHA announced that all “previously issued visas” to Afghan nationals not in India “stand invalidated with immediate effect”, citing security apprehensions the visas would be misused.

This also affects about 400 other students, who are at present in the middle of their studies in India, and had to return to Afghanistan when the COVID-19 pandemic led to the closing down of universities. As educational institutions now re-open, these students are the worst hit, as they deal with the new frightening realities of the Taliban regime, the restrictions on leaving the country, as well as the loss of their degrees, and possibly future careers in the process.

The Hindu spoke to several students with similar predicaments, and while all said they had applied for the newly launched “e-Emergency X-Misc visa” online, none have heard back. “The situation is still very fluid. There are a number of issues on which decisions will have to be taken,” an official source said when asked about the problem for students in general and ICCR scholarship holders in particular. “We will ensure that the interests of Afghan students are secured,” the source added.

Afghanistan’s Ambassador to India Farid Mamundzay, who remains in place in Delhi despite the change in Kabul told The Hindu that he had now raised the issue of the students with the ICCR, and sources said the Ministry of External Affairs (MEA) had written to the Ministry of Home Affairs (MHA) formally, seeking guidance for a total of more than 1,500 Afghan students.

According to diplomats, the government’s move could affect the future of the prestigious scholarship programme that has been a major source of goodwill for India amongst Afghans, with about 14,000 scholarships offered so far.

MHA officials, who will take a final call on the issue, did not reply to requests for a comment.

“If nothing else, we should keep our education, medical and trade relationship intact, along with the idea of a free and progressive Afghanistan,” said former Indian Ambassador to Afghanistan Gautam Mukhopadhyaya, referring to the scholarship programme as the “flagship”of the people-to- people relationship that has “opened up horizons and opportunities for the Afghan people and brought us together.”

Meanwhile panic is growing amongst Afghan students as the lack of responses has led to speculation that the government might suspend educational programmes for them. Mohammad Hadi, 26, a Sociology scholar has been trying to access the ICCR’s Ph.D. portal, and fears he may be forced to return to a home he doesn’t recognise.

“When I see photos of my province — Bamyan — crowds have completely vanished from the streets. People are scared to go out since for the Taliban, it is not a big deal to shoot anyone. At this point, there is no hope whatsoever to be able to return to our country which is why we need all kinds of assistance possible,” he said.