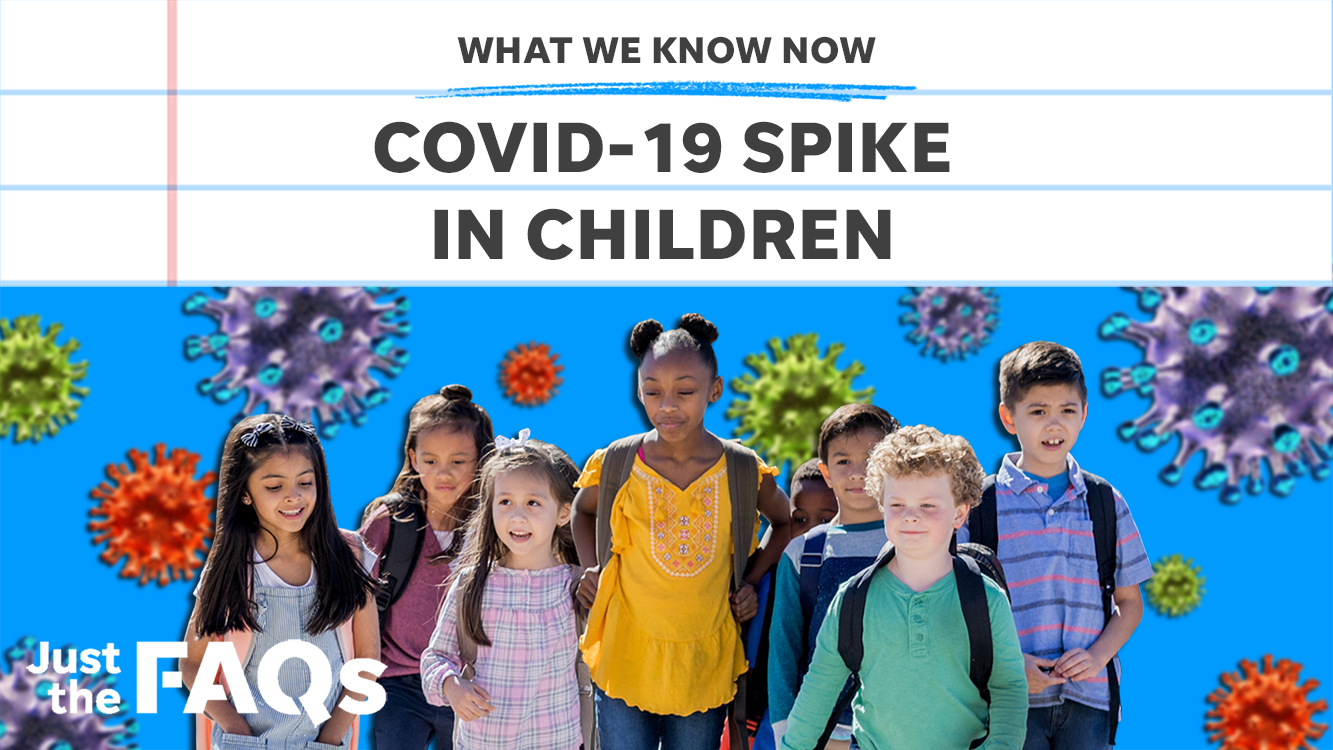 COVID-19 and children under 12: How the pandemic affects the unvaccinated

COVID-19 cases have spiked among children especially those under 12 who are unvaccinated. Here’s how to protect them.

The U.S. is sticking with it eight-month timeline for COVID-19 booster shots, at least for now, the nation’s top infectious disease expert said Sunday.

President Joe Biden had suggested Friday that the administration was weighing whether to give booster shots as early as five months after vaccination as the super contagious delta variant drives up transmission rates across the U.S. Biden had cited advice he received from the Israeli prime minister.

Dr. Anthony Fauci said Sunday that officials are open to shifting the recommendation based on evolving information, but for now the eight months stands.

“We’re not changing it, but we are very open to new data as it comes in. We’re going to be very flexible about it,” Fauci said.

He said there was “no doubt” in his mind that people will need to get an extra shot after they have received the two-dose Pfizer or Moderna vaccine. The Biden administration  has set Sept. 20 as the launch date for booster shots, pending approval from the FDA and CDC.

►The European Union may recommend by Monday banning non-essential travel from the U.S. because of its high rate of coronavirus infections, the Wall Street Journal reported Sunday. The paper said some countries may still decide to allow U.S. visitors with proof of vaccination.

►The risks of getting a blood clot if you contract COVID-19 are far greater than from receiving the Pfizer-BioNTech and AstraZeneca vaccines, according to a new BMJ study. Lead author Julia Hippisley-Cox told USA TODAY the purpose of the study was to demonstrate any risks associated with the vaccine are substantially less than with the COVID-19 infection.

►Two Oregon counties have requested refrigerated trucks from the state because of mortuaries being overwhelmed with COVID-related deaths. Tillamook County Emergency Director Gordon McCraw said it was not possible to transport bodies to other counties because of infection among staff members.

►Newspaper reporter Brendan Quealy of the Record-Eagle said he was punched in the face while covering an anti-masking event near Traverse City, Michigan. Quealy said two men confronted him and one of them shoved him into a fence and punched him in the face with both fists.

📈 Today’s numbers: The U.S. has recorded more than 38.7 million confirmed COVID-19 cases and more than 637,200 deaths, according to Johns Hopkins University data. Global totals: More than 216.2 million cases and 4.4 million deaths. More than 173.1 million Americans – 52.1% of the population – have been fully vaccinated, according to the CDC.

📘 What we’re reading: COVID-19 is surging among America’s youth. Doctors worry children of color, who disproportionately suffer from lack of access to health care, obesity and other chronic conditions, face the greatest risk. Read more.

Keep refreshing this page for the latest news. Want more? Sign up for USA TODAY’s Coronavirus Watch newsletter to receive updates directly to your inbox and join our Facebook group.

The highly contagious delta variant of the coronavirus may double the risk of hospitalization among unvaccinated people, according to a new study.

The U.K. study, published in The Lancet Infectious Diseases, is part of a growing body of evidence that suggests the latest delta variant may be causing more severe illness than prior strains.

“This large national study found a higher hospital admission or emergency care attendance risk for patients with COVID-19 infected with the delta variant compared with the alpha variant,” researchers found.

The study included more than 40,000 patients with COVID-19, who underwent genome sequencing to determine which variant of the virus they had. Most were unvaccinated. During the course of the study from March 29 to May 23, the delta variant became more prevalent.

As explosive Hurricane Ida roared ashore in Louisiana on Sunday, the pandemic presented complications to the typical array of disaster preparations. Louisiana has been overwhelmed with cases, and most hospitals were preparing to continue operating through the storm. Gov. John Bel Edwards said shelters would operate with reduced capacities “to reflect the realities of COVID.”

The storm arrived on the 16th anniversary of Katrina’s landfall as a Category 3 hurricane. Most of the city flooded, almost 2,000 people died, and federal officials estimated the damage at $125 billion. Ida was nearing Category 5 strength as it approached the Louisiana coast.

New COVID-19 cases and hospitalizations across Louisiana waned this week, but the state remains firmly in the grips of the worst yet fourth-wave COVID-19 surge. In the past four weeks, Louisiana has reported a total of 99,368 confirmed cases of COVID-19, the largest four-week total the state has seen since the pandemic began.

Louisiana’s Department of Health announced Friday that given the threat posed by Hurricane Ida to the state’s Gulf Coast, it will not be operating

A man who led efforts in his Central Texas community against mask wearing and other preventative measures died from COVID-19.

Caleb Wallace, 30, died Saturday, his wife, Jessica Wallace, said on a GoFundMe page, the San Angelo Standard-Times reported. He was a father of three children, and his wife was pregnant with their fourth child.

Wallace helped organize “The Freedom Rally” in San Angelo on July 4, 2020, in which people carried signs that criticized masks, business closures, the science behind COVID-19 and the media. In April, he demanded the San Angelo school district rescind all its COVID protocols.

Jessica Wallace told the newspaper her husband began experiencing COVID-19 symptoms on July 26 but refused to get tested or go to the hospital. He instead took high doses of Vitamin C, zinc aspirin and ivermectin, an anti-parasitic medicine that officials have urged people not to take.

Marc Bernier, a talk radio host in Daytona Beach, Florida, for 30 years and an outspoken opponent of vaccines, died after a three-week battle with COVID-19, WNDB and Southern Stone Communications announced on Twitter Saturday night.

Bernier, 65, of Ormond Beach, has been remembered in recent days as a conservative who sought out and aired others’ points of view while airing a morning comment, three-hour afternoon show, weekend shows and specials, such as remote town halls and political debates.

Bernier had issues with vaccines for years. Mel Stack, an attorney and friend who regularly advertised on the program, said Bernier’s anti-vaccination views were not based on politics, but personal experience based on how he believed vaccines had impacted people near to him.

An unvaccinated, unmasked elementary school teacher infected 22 students and four parents with COVID-19 in California, according to a new report from the Centers for Disease Control and Prevention.

While experiencing nasal congestion and fatigue, the teacher taught for two days before getting a COVID-19 test. Although the teacher thought the symptoms were simply allergies, she later tested positive.

The elementary school requires teachers and students to mask while indoors, but the CDC reported that the teacher was unmasked while reading aloud to the class.

“The outbreak’s attack rate highlights the delta variant’s increased transmissibility and potential for rapid spread, especially in unvaccinated populations such as schoolchildren too young for vaccination,” according to the report.